Hoo! Alright, we might as well lay our cards on the table outright: I’m a bit of a gunslinger in these parts, and I can’t say many fine folks out there on the digital streets would peg me as the obvious candidate for coverage of a Devolver Digital E3 conference. On the other hand, I’m almost entirely immune to the overall memetic presence and perception of the developer at large, so perhaps, in some ways, I can offer you a more honest take than many that you may have heard. Before I get off into the weeds, I’ll say this: Devolver entirely owns its brand, and as someone who just maybe has strived to get an internet brand jump-started these past three years and change, I can respect that. It’s a shame, then, that if they let the games do the talking, they’d have a much stronger presentation on their hands.

Perhaps I should back up a bit for those in the lurch: last year at E3, Devolver killed “Nina Struthers,” a fictional character meant to act as the company’s “Chief Synergy Officer.” This year, the team couldn’t quite manage to resurrect her, but instead revealed technology that allowed the conference to take place within Nina’s comatose mental state. In theory it’s a fun antidote to the mostly stilted cavalcade of CEOs and key executives, and to their credit, yes, there are cogent critiques of other conferences and developers present, and ones that Devolver’s overall from-the-hip oeuvre distinctly allows, but it’s continually frustrating that they choose to directly state their stances in regularly cringe-worthy dialogue. I think I get the “joke” here that they can’t curse too much on screen, but after genuinely earnest recitations of “heckin,” “what the poop,” and “H-E-double-hockey-sticks,” I miss Keanu Reeves more and more with each passing second. Yes, it’s “funny” when the scientists trying to revive Nina reference the fact that now she can’t make lofty promises the company will never realistically complete, but why wouldn’t it have been 10x more clever to have Nina state in her conference that HOTLINE MIAMI was going to have a fully immersive VR console rollout, launch its own next-gen streaming service, and… cure cancer…?

So let’s leave the gag-inducing interstitial segments aside. Yes, OK, the one clever part is when Nina begins glitching and there’s a fever dream of clips and segments of nightmare game visuals that may or may not exist that ambush the senses, but the rest of it sucks. Full stop. @ me gamers. And why it’s so frustrating is the fact that the games on hand here are… fine at worst, everything considered! There were only six games presented, and again, I’m going to give full respect to Devolver for orchestrating such a digestible and approachable conference, so I’m going to divide things into three tiers: Lame Shit, Meme Shit, and Interesting Shit. You probably won’t agree with me. 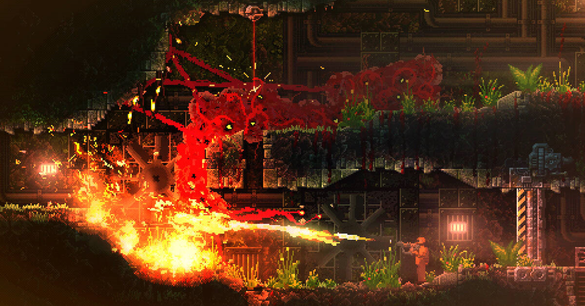 Oh ho ho, I bet you’re already getting real ticked off. From what I can parse out, CARRION is among the buzzier properties from the conference, but it left me entirely cold. From its low-budget, American McGee flip of a Sesame Street puppet mascot to its standard Devolver sidescroller action, but this time… red ooze… the claims of this being a “reverse horror experience” seem to ring false. Weren’t you able to play as Jason in that FRIDAY THE 13TH game “serious types” seemed to ignore? Hasn’t pretty much any bonus content worth its salt allowed you to play as the villain since the dog(hey) days of the PS2? I can’t honestly tell you what this game seems to be doing that’s better than any other indie output on Steam, and with a nondescript soundtrack to boot (you can’t look me in the eyes and tell me APE OUT’s soundtrack doesn’t absolutely fuck), I simply don’t care. 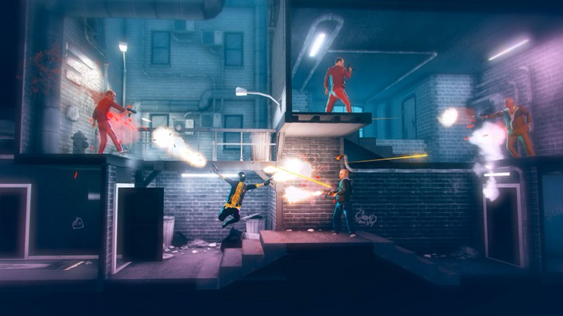 Surprise, surprise, the category with the most entries. So, to be clear up top, before you get too many ruffles in your feathers, I don’t think any games I’ll be talking about here look bad. I’m as much of a fan of blood, guts, ‘n bullets as the next guy, and I’m sure I’d have a perfectly enjoyable night in cracking open a few cold ones and taking THE MESSENGER: PICNIC PANIC and MY FRIEND PEDRO for a spin. To be honest, probably PICNIC PANIC to a lesser degree. I appreciate the overall palette and presentation of the look as a big fan of the Tiki aesthetic, but aren’t we all a little tired of NINJA GAIDEN clones at this point? Yes, yes, I’m sure there are differences, but this seems like it’s simply checking the box of the requisite retro-fitted game that is meant to sporadically pop up in a few year-end lists. Well, probably not actually, as this is a DLC expansion, but you know what I mean. Combined with boldly self-aware “advertisements” of game features such as “callbacks” and “boss fights,” I’m sure PICNIC PANIC is some light, meme-y fun. Now then, as far as MY FRIEND PEDRO goes, to be clear, the actual gameplay looks like it rips. High-octane, acrobatic bullet hell with a pounding electro-industrial soundtrack certainly piques my interest. What piques my interest less is the talking banana who turns to the camera and says “All aboard the hype train” at the end of a trailer where all the combat occurred on a train… *sigh*. Nevertheless, I guess it’s kind of clever, but I’m not very interested in whatever that banana has to tell me, and I’m sure what he’s going to tell me are quippy catchphrases that are going to try really hard to turn into hashtags. As far as the Devolver Bootleg bundle goes… yes, it got a chuckle from me. It’s a bundle of bootleg versions of Devolver games you can buy on Steam if you’re really committed to the bit. “Hotline Milwaukee” is a good bit of fun. But again, the exhaustive and almost unlistenable intro to the bundle which consisted of rapid-fire recitations of tongue-in-cheek facts about revenue streams and shady business practices takes a good bit of wind out of the sails. Again, just do a conference segment on “Hotline Milwaukee” without ruining the built-in joke! 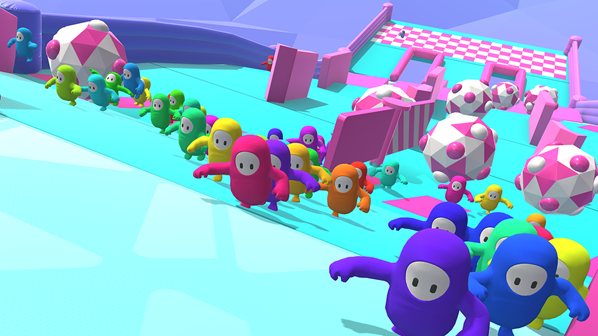 Yes, really. The trailer I was most charmed by was FALL GUYS. I don’t know what to say, I love these lil tykes! The colors are bright and arresting, the gameplay looks like it has a soft learning curve but still promises thrills and frustrations as you try to be the one cute blob to reach the crown, the stages and overall atmosphere seem zany, kooky, psychedelic, and a combination of all three, it looks like something you could play with any and everyone… I don’t know, folks, that sounds like a game worth paying attention to as far as I’m concerned! Plus it makes use of an understated and breezy inclusion of Harry Belafonte’s “Jump In the Line”! What’s not to like! Promising something a little different as far as the overall Devolver canon is concerned, I think it could be a sleeper hit. Now then, to end things with GUNGEON: HOUSE OF THE GUNDEAD. “Thomas,” you might say, “for someone who has complained so much about the ‘meme potential’ of Devolver games, why the heck did you pick the memeiest product to champion?” And to you, dear reader, I say, “because I will always appreciate taking a bit to its logical conclusion.” To use E3 to announce a light-gun arcade cabinet is… kinda metal, to be honest. At least as a casual gamer, I can’t point to any somewhat buzz-y publisher that is putting work into arcade cabinets for indie IPs in 2019, and while I can’t say the demonstrated gameplay is notably electric… respect! This feels like a fresh, comparatively understated flexing of what a smaller studio can do for niche demographics and fans, and I kinda dig it!

So, at the end of the day, I think Devolver had a solid roster of games and ideas to present. Would I rather watch their conference than one of the 90-minute-plus ones from the behemoths? Hell no! The skits are really, really bad and I couldn’t even pretend to want to rewatch the thing in its entirety while writing this article. But if the actual products on hand were presented in a traditional format, I think the overall returns would have been higher. Nevertheless, I can say that with the more modest price-points, I could see myself buying exactly half of what’s on display here, and when every game from every conference is factored in, I don’t think I could say that for any other studio.