I have this wild fantasy of Bernie Sanders punctuating his campaign rallies with a battle cry coined from the MISS ANTHROPOCENE single “Violence”: “Baby, it’s violence, violence / baby it’s violence.” Grimes endorsed Sanders at Coachella during the 2016 election, but imagine the unadulterated comedy of Sanders somehow supporting Grimes in her current iteration. Not that Bernie wants violence, or that Grimes even supports his policies anymore, but their rhetoric teeters on the brink of revolution, which is where the similitude begins. It may be unfair of me to bring politics directly into the mix, even for comedy’s sake, but I think what Bernie and Grimes have in common is an attitude of take-action-extremism in a historical moment of uncertainty.

MISS ANTHROPOCENE heralds the apocalypse. It portends something momentous, unsettling, and ultimately expansive. Its cinematic soundscapes epitomize sonic storytelling—Grimes’ self-proclaimed “ethereal, nu-metal(ish)” genre dons the narrative of misanthropic, anthropomorphizing nymphs reveling in the climate change-driven destruction of the world. The concept is subversive, as Grimes is wont to be. And yet, there is no shadow of a doubt that the album cements her pop stardom. Although she might eschew that title, Claire Boucher has cultivated an auteur mystique underscored by mainstream fandom. She has remained a literal incarnation of the individual (see: indie) artist, completing almost all aspects of her projects alone with a hide-in-the-dark, art-is-my-life, romanticized isolationism. But her work is well received and, dare I say, popular! Which begs the question: does pop necessitate pleasure?

Take “Delete Forever,” a jarring transition into guitar and…a banjo? It is an interlude in the hellscape programming befitting of Taylor Swift—humming and all. It is cold, hard pop. Yet the juxtaposition of gnashing lyrics about drug addiction paired with the drone-pulse of the rest of the album coats “Delete Forever” with the sheen of self-aware irony. It is sugar with a bite, especially considering the opiate-related deaths that inspired the song.

The album may be conceptually successful, but it ain’t easy listening. Opener “So Heavy I Fell Through the Earth – Art Mix” kicks things off with a blush of ambient sound. Rather than plunging headfirst into a world of delightful nihilism, the downtempo track materializes around the listener, likely the result of a driving backbeat and dreamy guitar licks. The music creaks and groans, rumbling forward with seismic reverberations, giving way to an even scarier “Darkseid.” One of Grimes’ eerie nymphs purports, “unrest is in the soul, we don’t move our bodies anymore.” This provides the bridge for a bursting-at-the-seams rap from Taiwanese artist 潘PAN (formerly Aristophanes) that bubbles forward with desperation, a swarm of bees driven from the hive.

Other than the commendable “4ÆM” and “We Appreciate Power,” the former fielded by dancefloor drum and bass and a nod to Bollywood, the latter a collaboration with HANA that serves as the anthem of the album (“What will it take to make you capitulate? / We appreciate power”), the rest of MISS ANTHROPOCENE is rather forgettable. There is an undeniable cohesion to the narrative: the tracks are tethered to one another as if through a cicatrix. The scar simile intentional because the piece is wounded; thematic ambience threads together different flavors of war nymph. From lo-fi fadeout on “New Gods” segueing into electric guitar intro on “My Name is Dark – Art Mix” or extended reverb at the end of “Before the Fever” giving way to the bird chirps of “IDORU,” the tracks evoke a single milieu—that of a pop dirge. Taken as individual pieces, however, the songs begin to become a pastiche of one another. Take the lyrics of “You’ll miss me when I’m not around”: “If they could see me now smiling six feet underground / I’ll tie my feet to rocks and drown,” all cheeky wink, feels like another version of “Delete Forever.” This is not an entirely negative assessment, but rather an inclination towards appreciating the work as a whole instead of component parts.

The new Artificially Intelligent, cyber-demon Grimes has crafted a work of ironic artifice, imbuing the cynical undertones of the album with a dash of realism. Grimes discusses the darkness of the album, claiming that traction around its negativity makes her consider the importance of “suggest[ing] positive futures.” I believe the pop allure posits against the dangerous rhetoric of annihilation, but there is a world in which the sugary-gloss aesthetic inadvertently compounds the message. If anything, Grimes has catalyzed a new universe of her character-driven music and can just as easily create an album in response to MISS ANTHROPOCENE’s cataclysmic ruminations on the end of the world. In many ways, this album leaves us hanging with baited breath for her next—hopefully it will sound more nuanced. 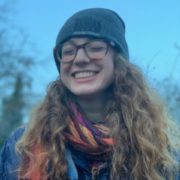