Though this may sound like a galaxy-brain wraparound to toot Merry-Go-Round Magazine’s own horn, I promise it’s not: THE INVISIBLE MAN is among the stronger recent cases for media commentary/criticism still mattering. Having been left thoroughly unimpressed by the trailer, expecting the film to have blown all of its twists and turns and not left overly confident considering the director of INSIDIOUS: CHAPTER 3 was at the helm, I wasn’t exactly looking forward to what I assumed would be a tacky Elisabeth Moss shriekfest. I only made a point of checking it out because somehow, seemingly impossibly, everyone seemed to think it was good. And reader, let me tell you, it is! Great, even. The first mainstream film of the year worth paying attention to, Leigh Whannell’s third time at the director’s helm is as evocative as it is unassuming, a tightly crafted, well-acted thriller with genuine twists, turns, and surprises.

Flexing H. G. Wells’ entrance into the public domain, THE INVISIBLE MAN picks up with Cecilia Kass (Elisabeth Moss), a woman trapped in an abusive relationship with wealthy tech wunderkind Adrian Griffin (Oliver Jackson-Cohen). Making a madcap escape one night, Cecilia goes to stay with her good friend, the policeman James Lanier (Aldis Hodge). Informed shortly afterwards of Adrian’s apparent suicide, Cecilia lets herself breathe, especially when she discovers that Adrian left a generous portion of his estate ot her in his will. However, when increasingly ominous signs seem to suggest that Adrian’s alive and well, somehow having returned from the grave to torture Cecilia and drive her to insanity, she must convince all those around her that she’s not insane as her mental state unravels and a body count begins to accumulate. 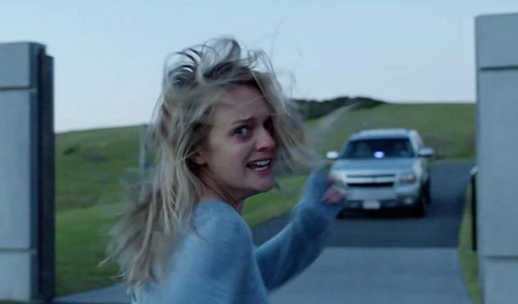 Me running away from the Super Tuesday election results

What immediately makes THE INVISIBLE MAN stand out from the rest of its innumerable peers is that this is the rare Blumhouse project where the characters act and talk like living, breathing people. Featuring a notably strong script that gives all of its core cast a hefty dose of moral ambiguity, or at least pushes them into corners where they make self-motivated decisions with clanging repercussions, the film thankfully doesn’t come across as a patched-together jalopy of cheap jump scares, instead encouraging us to become genuinely invested in Cecilia and her attempts to fully and finally separate herself from her abuser. Immediately and effectively able to identify with her, our sympathy is increased the more and more people begin to doubt her, as she finds herself continually unable to provide concrete proof of what’s occurring. Showing the physical and emotional toil that the events of the film have on her in a realistic manner, by the end Cecilia looks completely shaken and broken, with no small thanks due to Moss’ committed star turn, which makes her rise out of the ashes all the more triumphant. Topped off with a strong supporting cast that mercifully manages to have conversations that don’t sound as if they were ripped from an AI, not one scene in THE INVISIBLE MAN has you cringe or roll your eyes.

That’s not to mention Whannell’s iteration of Adrian Griffin, who manages to evoke the aura of the classic literary character while feeling like his own firebrand entrant into the hall of horror villains. Whereas Jackson-Cohen doesn’t exactly get to chew the scenery considering for the vast majority of the runtime he’s, well, you know, THE INVISIBLE MAN is still able to inject its titular baddie with an impressive amount of menace. Filmed with a tight paranoia that makes full use of its notably contained list of locations, there’s always just the flicker of something dancing at the corner of our eyes, continually leaving us unsure whether we’re pushing ourselves to see a hint of where Griffin may be or if we’ve actually caught a clue as to his blocking. This ratchets up the tension to heart-racing levels, and the sheer fact that for many frames we are just staring at any empty corner of an empty house demonstrates a pronounced restraint on what could be a pulp shlock fest. That’s not to suggest that the film has any notable sense of airs about it, as things eventually roll into a genre-friendly, sci-fi adjacent thriller that’s a whole lot of popcorn fun for this early in the year, but the tasteful way in which this tonal shift occurs is another point in THE INVISIBLE MAN’s favor, the rare horror outing that can actually pull off juggling genuine dramatic and action-oriented components without jumping the shark. 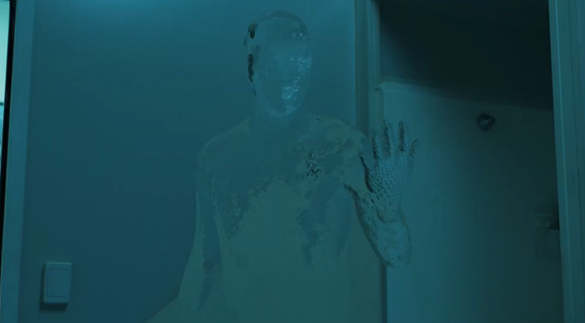 Indeed, THE INVISIBLE MAN simply feels like a horror film that’s just a little bit more throughout its runtime without throwing a Hail Mary and landing somewhere in the contentious endzone of “elevated horror.” Not making any attempts to get an “atmospheric” tag and not opposed to dosing in a few pearl-grasping moments of shock and fright, the film instead situates itself in discourse in a way that never feels heavy-handed or obligatory. It’s one thing for a studio to market a flip of a classic property on superficial “feminist” elements, but Whannell and company instead let the execution do the talking, showing Cecilia fighting tooth-and-nail against the supposed lover that refuses to let her go and the gaslighting and denial coming from the side of her family and friends that’s an unfortunate stand-in for innumerable examples of the same across a long history of women attempting to come forward about their abusers. Moss is able to showcase both frustrated vulnerability and a deep well of internal resolve and tenacity, feeling like a fully realized fighter instead of a damsel-in-distress or the classic conception of a “scream queen,” and the film is able to make its stance clear without preventing its lighter genre elements from shining.

Is THE INVISIBLE MAN an “important” film? Likely not, but horror in general has received a lot of thinkpiece-ready analysis over the past few years, and it’s nice to see an outing that casually reminds everyone that all you really need is solid writing and blocking. Whannell isn’t trying to make something that sticks with his viewers long past the closing credits, or something that’s seeking to add a new subgenre to the scrum, or something that’s aiming to be studied in media courses a decade or so from now. He’s simply there to remind us that our Friday night film selections can entertain without feeling flighty, positing THE INVISIBLE MAN as a likely contender for this magazine’s End of Year consideration nine months down the line.

Grimes’ MISS ANTHROPOCENE Is a Scattered Sign of the Apocalypse