Movies are actually kind of back! As we ride out 2021’s schedule of 2020 holdovers, there’s no denying that the vaccine rollout (and combined vaccine hesitancy) has made it so the gas has been pumped and there’s no slow to the motor in sight–these flicks are going to be seen, goddammit. So far (spare the dismal SPIRAL: FROM THE BOOK OF SAW), horror and genre have been the only offerings to mirror even an echo of the once-roaring American box office, with GODZILLA VS. KONG marking an inaugural semi-return to form for studio economics. F9 and IN THE HEIGHTS are just around the corner, but for this pocket of time, let us rejoice in audiences finding solace in a bit of a controlled fright with the top two films in America: A QUIET PLACE PART II and THE CONJURING: THE DEVIL MADE ME DO IT. 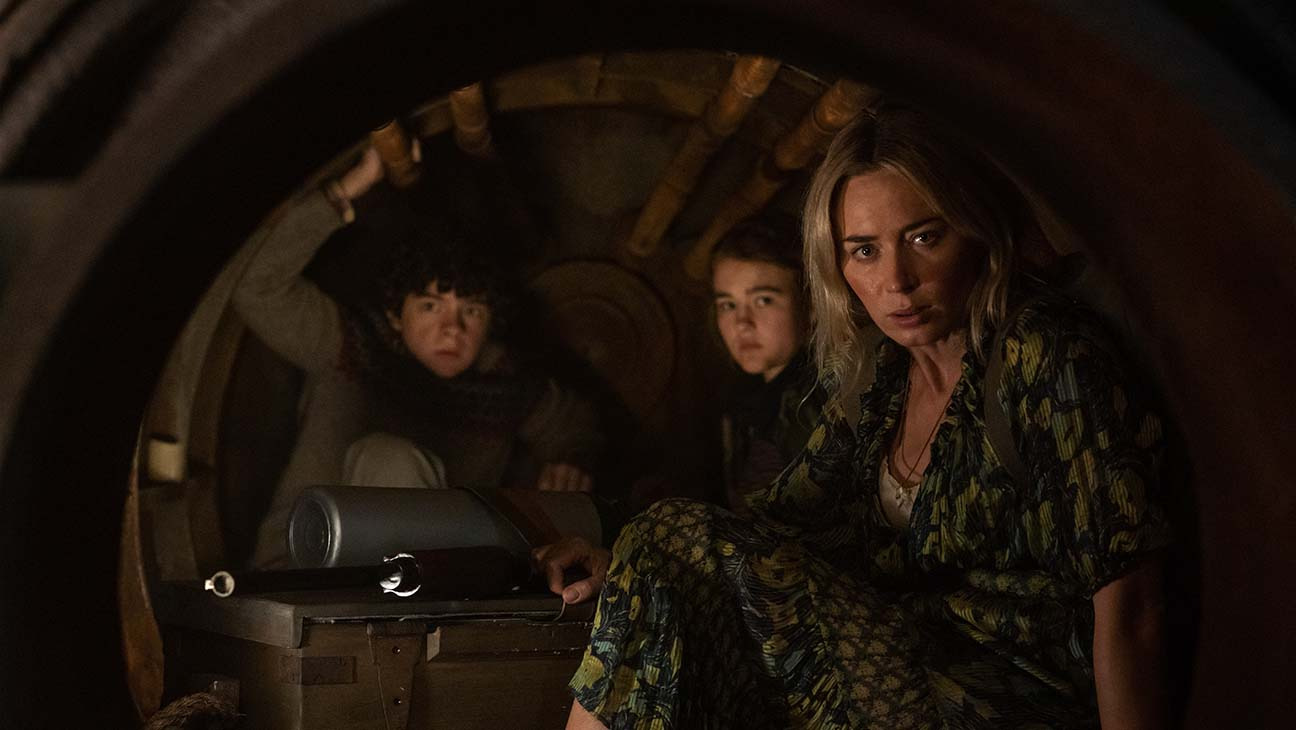 Fresh from everyone’s favorite CIA apologist and lazy news grifter comes the hit blockbuster that’s going to bring the movies back, baby! Well, at the very least, attempting to make a modest return that will, most likely, turn a narrow profit over the course of its theatrical run, if audiences feel comfortable enough to poke their heads back into theaters again. A QUIET PLACE PART II has become part of the much-hyped “return to theaters” as we all limp towards our hollow vestiges of normalcy and furtively go back to the movies, praying that everyone sitting two rows away from us and shoveling popcorn into their mouths is actually fully vaccinated. The follow-up to John Krasinski’s 2018 subtitled apocalyptic hit comes a full year late and it’s hard not to feel like it’s also a dollar short.

There’s nothing inherently wrong with this sequel, the big moments that want to evoke taut thrills hit right, and if this is your return to the movies then it will probably feel pretty emotionally satisfying to experience a movie explicitly designed to be enjoyed in a theater. However, as the film transitions from being tightly contained to a farm and its immediate vicinity, much of PART II ends up feeling like staging for what will hopefully be a much richer third installment. A lot of what made A QUIET PLACE such a welcome breath of fresh air was how confidently it demanded your rapt attention: you were deeply rewarded for reading the subtitles closely and sitting in silence. PART II largely abandons the need for audience participation, with most of the silent segments only lasting a few minutes; much less crucial information is communicated exclusively through sign language. There’s still plenty of confident direction from Krasinski throughout PART II, but it’s also obvious he caved to the lowest common denominator of audiences in order to keep the wheels turning on his franchise. Unlike the first A QUIET PLACE, it feels like we don’t get to watch these characters go through nearly the dramatic change and constant adaptation that made the first film so compelling. Internal obstacles are overcome far too easily, and external obstacles just don’t feel nearly as harrowing or insurmountable as they did in 2018.

Millicent Simmonds really comes into her own as the lead, carrying a lot of the best sequences in her performance. It’d be nice to be able to say Cillian Murphy brings a lot to the table, but his character is so bare bones there’s not much to say about his muted interpretation of playing Joel from THE LAST OF US. I’m not the only one to notice the obvious lifting of the plot of the blockbuster Naughty Dog game, and it’s also hard to shake the feeling that very end of the film is more or less riffing on STRANGER THINGS; it feels like homage more than theft, but you do wish Krasinski would borrow slightly less obviously. Still, I will absolutely be catching A QUIET PLACE PART III on its opening weekend, so no one can say Krasinski ultimately failed in this outing. [Carter Moon]

THE CONJURING: THE DEVIL MADE ME DO IT

It took me a few minutes into THE CONJURING: THE DEVIL MADE ME DO IT to realize James Wan had not directed this mainline installment (THE CONJURING 2 is one of the great big-budget funhouses), and when it hit that I was instead watching a film by the dude who made THE CURSE OF LA LLORONA, well… Safe to say, I drifted. That’s kind of the beauty of HBO Max’s weekly same-day premieres: should I choose to waste my time on Warner Brothers’ absolute worst annual slate in decades, I will at least be in my own home with a remote control, a laptop, a Nintendo Switch, and a personal bathroom where I can leave the door slightly cracked to barely listen in on some bullshit Catholic nonsense while I pinch a polite turd. There was a stretch in the film where the Warrens are investigating bodies in a morgue where I left my room, checked if there was someone at the front door, walked to the mailbox, and came back without ever pausing. The fresh air was nice.

I would have probably had a mental breakdown had I wasted gas, money, and time to drive to my nearest AMC to watch THE DEVIL MADE ME DO IT in a room of mouth-breathers, and, frankly, I haven’t mourned not seeing a single one of the past year’s releases in a “proper” chain cinema. Home theaters are reasonably affordable luxury expenses, and if you wanted to go above and beyond and recreate the Dolby Cinema experience at home, you could sit on a subwoofer like a Sybian and call it a day. The sonic thumps and bumps would help out director Michael Chaves’ countless stingers—it’s never a promising sign when the first scare in a nearly two-hour horror film is a banging door. The one solid gag, wherein a child plays with a waterbed while a decomposing face quietly and barely shows through the translucent rubber, is immediately undercut by a jump-cut to a loud boom and a zombified arm grabbing at the kid. Monster-of-the-week programming should never exceed 90 minutes, but Chaves cares so little that he praises God and His organized worship in a film where the antagonist is a human stowaway shunned by the Church for merely existing, and this dull true crime approach to unexplainable, supernatural horrors (a demon is defeated by destroying some furniture, very spooky indeed) makes you feel like you’re witnessing the death of a once-promising series. I guess kudos to WB for finally finding the perfect stooges to actualize the Catholic Church as The Avengers EXORCIST franchise they’d been trying to bully William Peter Blatty into creating since the jump.

It’s kind of weird to watch a movie now, to care about a movie now. I’ve tried, both in theaters and at home, but there’s no ecstasy in relishing in the onscreen blinking lights as the world’s gears grind its swaths into a purée, especially when the gears aren’t even oiled anymore: every day we’re deafened by the curdling whinny of a transmission bleeding smoke. We’re so neck-deep in an inescapable gravity that the recipe’s off. I’m asking a lot from movie theaters, and, sure, maybe the entire entertainment industry, and why not, add my fellow man to the heap, but I’m not about to pretend they’re not asking the world from me, too. THE CONJURING: THE DEVIL MADE ME DO IT is simply the very latest in HBO Max’s threat-a-week premiere lineup that’s composed of direct-to-video ’90s actioners, B-movie leftovers, and, worse yet to come, austere awards contenders. This shit never cut it, but it especially doesn’t now. [Kevin Cookman]