I don’t like to be angry, and few games make me more furious than social deduction games. For example, I believe SECRET HITLER is one of the best-designed games out there. It’s perfectly tweaked to get you to distrust everyone else, as one wrong vote gets Hitler into power and scores an instant win for the Fascists. The policy passing system creates so much tension and opportunities for mind games and chaos. Getting handed two Fascist policies so you don’t have a choice in what to pass, while having no idea whether your chancellor had three Fascist policies or discarded one Liberal, is despair-inducing. The reverse, where you give the president a Liberal and Fascist policy only for them to turn around and pass the Fascist policy and claim they had two Fascist policies, is just as back-breaking. I love watching it and have nothing but admiration for it. Still, I hate every second of playing it.

Secret roles are ubiquitous and pop up in nearly every type of game, from light party games to long thematic titles. In concept, it’s one of my favorite ideas, as it ensures that games have replay value due to the multiple roles and opens the door to bluffing and paranoia. However, many of them end up more stressful than fun. I enjoy numerous games that feature a traitor, like DEAD OF WINTER, but that is merely one mechanic amongst many. The social deduction games I’ve come to dislike are the streamlined ones like WEREWOLF. The only one of these titles that I will eagerly play rather than begrudgingly join so as to not obstruct the night’s procession is DECEPTION: MURDER IN HONG KONG, which assuages my issues with the genre by letting players go maverick, preventing the loudest voice by taking over, and not dragging its feet. 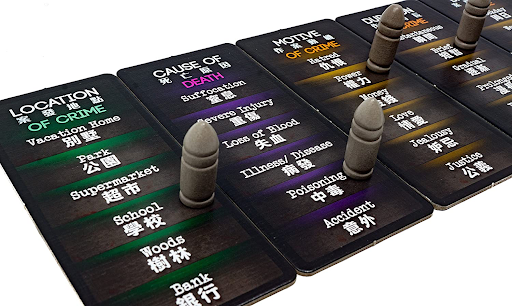 One player takes the role of a forensic scientist who knows the identity of the murderer. Each player has four weapons and four pieces of evidence, and the murderer picks one of each to show the scientist. The scientist then draws four “scene” tiles, a method of death, and a location tile, placing one marker on each to give a clue. For example, if the murderer picked arsenic as their weapon, the scientist will likely give poisoning as a clue. From there, the good guys each have one guess to identify the murderer, weapon, and evidence. The scientist cannot respond to a guess with anything but a “yes” or “no.”

One of the common complaints about these games is how the loudest voice in the room dictates everything, shutting down dissent and directing the game’s flow through volume. I’m a six-foot, 195-pound man with poor hearing due to years of sinus infections, and I’m always fearful of making others uncomfortable with my boisterousness. During ANOMIA, a fun little card game about exclaiming examples of various categories before anyone else, I felt like I was shouting over my opponents. That’s not necessarily the fault of the game. It’s just not something I’m comfortable with.

I like being mean in games by outplaying people—like stealing ties in AZUL or assassinating opponents in CITADELS—but there’s no fun in yelling over people and leaving them no room to speak. DECEPTION: MURDER IN HONG KONG’s solution is that, during every round, each player gets 30 seconds to present their theories, and no one can interrupt them. Theoretically, this could be implemented into any gaming experience, but the fact that it’s written into the rulebook is a testament to how keen the designers were about avoiding the traditional pitfalls of their genre.

Cooperative games are a great addition to the hobby, but sometimes you’re convinced your teammates are holding you back. In a game of THE RESISTANCE: AVALON, I had Merlin’s role and knew each player’s position. I handed the win to my teammates, choosing all of them for the final mission, but they’d been hoodwinked, and I’d lost their trust, so the villains won. Many social deduction games punish you for trying to go your own way or are decided by majority rule, so you have to convince everyone of your brilliance. 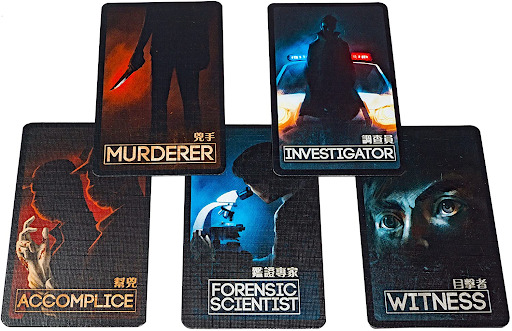 In DECEPTION, there is no punishment for being a maverick aside from questioning looks from your compatriots. You can turn in your badge at any point and try to make a guess without anyone else’s approval or consent. Hell, you could get the game right on the first turn. To prevent gaming the system through these guesses, a scientist is limited in what they can tell you. You’ll have no clue if the weapon, piece of evidence, or even the person you accused is correct. The murderer also possesses the ability to make a guess, so if you can’t justify yourself, you will look suspicious by throwing away your guess without consulting enough with everyone. It’s a good mix of autonomy, while still needing to consider how it looks in the eyes of your teammates.

Oddly enough, the fact that the game could be over within a single move is part of its appeal to me. The forensic scientist can add two new scenes over the course of three rounds, perhaps to remove a clue that is leading the team astray, but all the needed information is out on the table from minute one. In something like WEREWOLF, even if you figure out someone’s identity by peeking at them through one of your powers, you have to persuade everyone else of both your role and knowledge. In DECEPTION, the evidence is public, and it’s easier to persuade your teammates as a result. This might make it seem like the heroes have a huge advantage, but the murderer sees all the evidence as well and can tailor their choices to sow their most chaos and confusion. The traitor can just as easily manipulate the heroes by throwing out a few guesses as well. Furthermore, even if they are singled out as the murderer, they could still win if the heroes can’t quite figure out the weapon and evidence.

Fans of other social deduction games might find DECEPTION toothless and not paranoia-inducing enough with how open information is. But, the best part of a social deduction game for me is the deduction, where I figured out the traitor through my own intuition rather than them messing up. Similarly, the best part of being the traitor, tricking your friends, is easier to do with the weapon and evidence clues. A social deduction game based on public information might seem impossible, but DECEPTION pulls it off, smoothing over the genre’s most loud-voiced and frustrating elements while still offering plenty of second-guessing and trickery.