Over the past few years, Japanese filmmaker Ryusuke Hamaguchi has quietly become one of the most exciting and thoughtful directors working today. Though they are often lengthy, the narratives of his films are small in scale, giving careful attention to the lives of a few characters and how their beliefs, desires, and instincts can suddenly change and affect the people around them. One of the two new Hamaguchi films that have premiered this year, WHEEL OF FORTUNE AND FANTASY, is an anthology of three short films that play with random chance encounters and sudden twists of fate, ranging from mean-spirited to bitterly ironic, laugh-out-loud funny to unexpectedly touching. It contrasts wonderfully with DRIVE MY CAR, a much more focused, complex work from Hamaguchi that might be the best film of the young decade so far.

Two years after the sudden death of his wife, stage actor and director Yûsuke Kafuku (Hidetoshi Nishijima) goes to Hiroshima to direct a multilingual production of Chekhov’s Uncle Vanya. During his stay, Kafuku is assigned a young driver, Misaki Watari (Tôko Miura), with whom he develops a close bond over their mutual losses. The film production of UNCLE VANYA is complicated by the presence of Kôji Takatsuki (Masaki Okada), the actor playing the titular role who previously had an affair with Kafuku’s deceased wife. Much like his previous work, Hamaguchi patiently depicts the main characters and their relationships with each other, building on them until they finally reach an emotional crescendo. The movie’s three hour runtime may seem daunting, but it is only because of Hamaguchi’s extreme patience and attention to detail that the overbearing grief of DRIVE MY CAR is so deeply felt, and its final catharsis so earned. 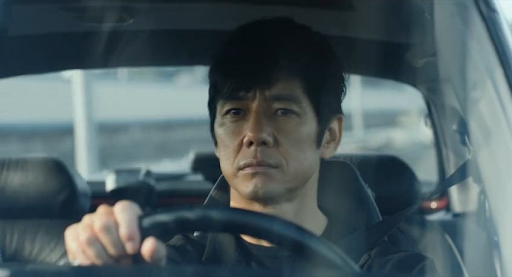 Performance and theater have always played a central role in Hamaguchi’s work—not just in his direct utilization of plays, but in the vibrant manner he organizes extended scenes of conversation. The dialogue between his characters never comes off as direct exposition. Instead, the conversations of DRIVE MY CAR evoke the peeling of a fruit, casually revealing just a bit more about whomever is speaking. Hamaguchi is equally preoccupied with the act of communication itself. This is most exemplified in the production of UNCLE VANYA that Kafuku is directing, where he casts people who only speak Japanese, Mandarin, or even Korean sign language. The UNCLE VANYA script becomes a language of its own, a common ground where people of different ethnicities and nationalities can equally connect.

UNCLE VANYA also contains a more personal meaning for Kafuku: it was the play he was preparing for when his wife passed away years ago, and he develops a routine of listening to a recording of her reciting nearly every line. Originally just a way for him to memorize Vanya’s lines while driving, the cassette becomes the final method for Kafuku to interact with his late wife. The recitation of the Chekhov play—about a middle-aged housekeeper whose resentments toward his successful brother-in-law threaten to boil over– often coincides with Kafuku’s own complicated feelings toward his wife, her affairs with other men, and her unexpected death. Hamaguchi creates an incredibly heartfelt depiction of how people attempt to process their personal loss and loneliness through art, whether that be through plays, paintings, or even film. 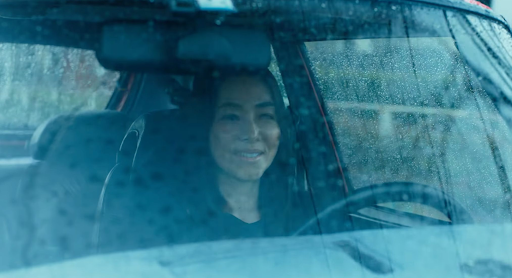 Though Hamaguchi’s films are often rooted in theatrical construction of scenes, he has a knack for making them dynamic through precise blocking and editing. DRIVE MY CAR has some of the most beautiful images of his career, making notable use of reflections, from mirrors or gently refracted through windows, to visually stress the difficulty of direct communication between people. True to Hamaguchi’s style, DRIVE MY CAR also has a few shots where a character looks directly into the camera—a jarring disruption that works in tandem with any sudden revelation or vulnerability. His interrelationship between form and content display a mastery that few of his contemporaries can match.

Most of 2021’s new releases have avoided the COVID-19 pandemic. Outside of a brief epilogue, DRIVE MY CAR isn’t set during the pandemic but nevertheless feels inescapably haunted by the losses we’ve had to deal with for over a year and a half now. Hamaguchi’s previous films, HAPPY HOUR and ASAKO I & II, are both about disruptions in their characters’ lives, realizations that force them to confront whether or not they are truly fulfilled. Alternatively, DRIVE MY CAR largely takes place after a disruption, where Kafuku, Misaki, Takatsuki, and others are trying to pick up the pieces of their shaken lives. It seems to be no coincidence that the majority of the film takes place in Hiroshima, a region forever stained with enormous tragedy and lingering questions of recovery. Hamaguchi isn’t seeking to make a specific political statement, instead touching on the universal suffering that all of us are especially affected by now. Just like Kafuku with Chekhov’s Uncle Vanya, DRIVE MY CAR is a magnificent piece of art that can help us understand, process, and accept the swell of emotions that recent events have unleashed inside of us. We cannot and should not forget, but we still have to keep living.