“I’ll give you a take on anything you want, man. I love giving people takes. I don’t even care what it’s about!”

Swirling the bottom of his second IPA and gesturing intensely, Jason Hawk Harris is being silly, the kind of silly one often is at the end of their second craft beer. But he’s only half joking. The boisterous offer was preceded by some poetic musings about the mandolin playing of Mark O’Connor, and a run down of some of his favorite Los Angeles restaurants (his close-to-home go-to is a Mediteranian joint named Cafe Santorini), and was later followed by thoughts on BANDERSNATCH, dad bods, Val Kilmer, FORTNITE, and Bon Iver. He’s spent the last two hours, joking or not, proving that he really does have a take on everything.

We’re sitting in a Highland Park gastro pub only days away from the release of Harris’ excellent new album LOVE & THE DARK, one of the most self-assured and fully realized country debuts in recent memory, and an exciting record that immediately reads as larger than the sum of its parts. Harris, wearing a black button down with his swooping boyish hair, looks the part of a rising alt-country star, only I wouldn’t call him that to his face.

“It’s weird it’s called ‘alt-country,’” he says, zeroing in on something that has clearly bothered him for some time. “It’s so strange to me. It should just be called country. It’s bizarre.”

Bizarre or not, the rising quote-unquote “alt-country” scene is becoming somewhat undeniable on a pop scale, a fact that Harris is quick to note. Jason Isbell has one of the most prolific Twitter accounts in the world, Sturgill Simpson has become 2019’s most unlikely movie star, Kacey Musgraves is winning Grammys and becoming a meme, and Tyler Childers had the #1 country album in America (Harris’s take: “only for a week until that 17-year-old on AMERICAN IDOL took him over because some asshole in Nashville wanted a new pool”—which is fair); each of those artists certainly exist left of Nashville’s decided pop center, but each have crossed many roads dominated by what the genre was perceived to be rather than what it could (or maybe should) be. 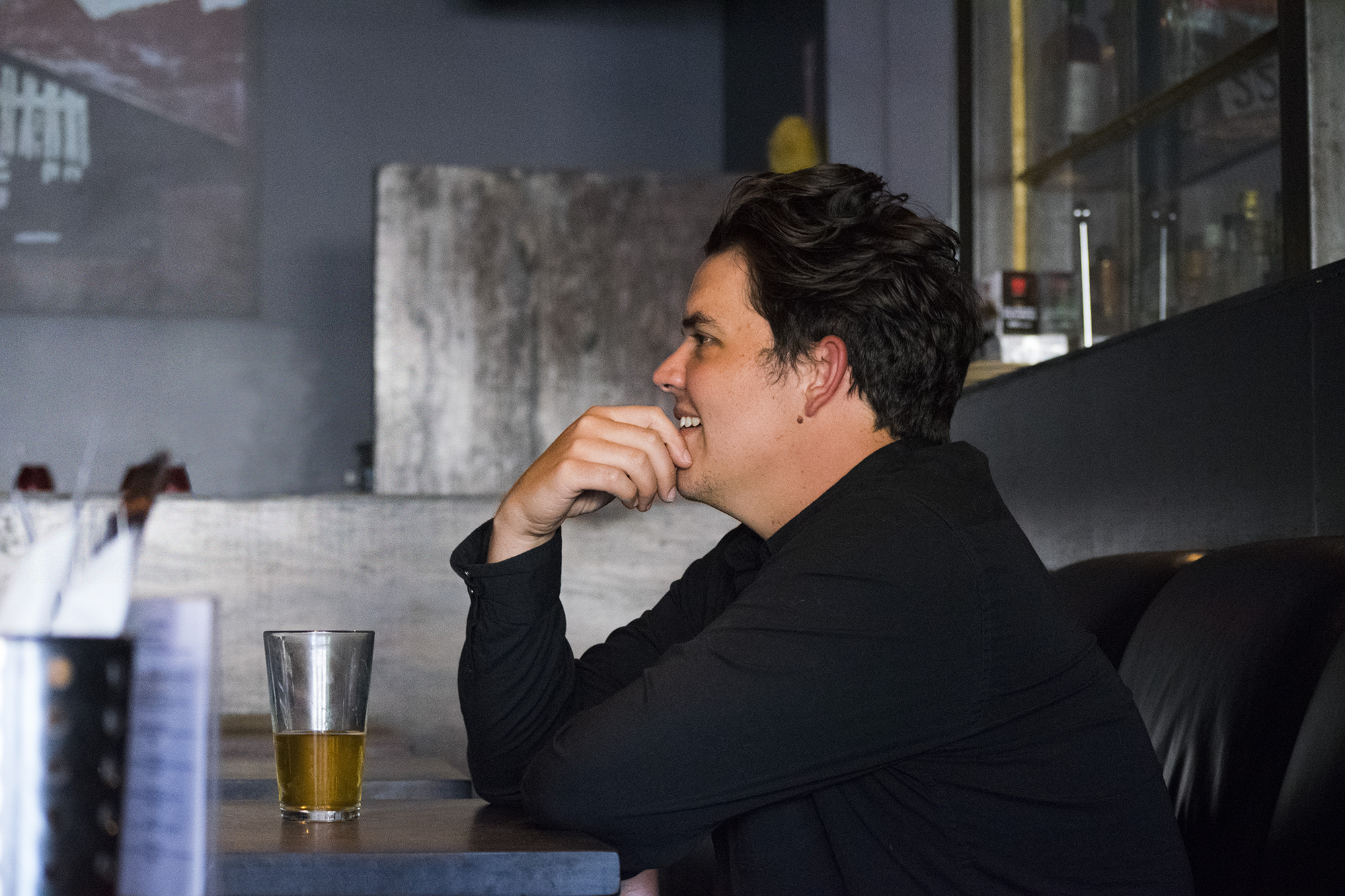 Harris, who moved from Houston to Los Angeles when he was 18 over a decade ago, is himself crossing one of the music industry’s many roads. Formerly the guitarist for indie bluegrass act the Show Ponies, LOVE & THE DARK represents his first release as a solo artist under his own name. My first knowledge of Harris stretched back to 2017, where he was sharing local support duties opening up for another notable rising country star, Sarah Shook. Watching Harris take the stage and play to a mostly empty room in Orange County was disheartening, but you could nonetheless tell that the guy was special, so much so that my friend leaned over mid-set and noted that if the right people heard him, he’d be a star.

Those people would go on to be Bloodshot Records, whose 25-year history as purveyors of what some would call real country, influenced plenty of Harris and I’s conversation about Nashville and pop country. “I’m definitely not going to be an evangelist, that’s not my thing,” he says. “Like Sturgill and Tyler, I’m glad they’re calling a lot of this bullshit out, but it’s just… I don’t feel like I’m steeped enough in the traditional sound, but I’m glad to be a supporter. ‘Yes, I agree with what they’re saying.’”

LOVE & THE DARK has a decided twang to it, don’t be mistaken. The album’s lead single, “Cussing at the Light,” leans almost a bit too much into that fact, a sweeping honky tonk bar stomp that finds Harris playing to that exact traditional sound he’s trying to keep at arm’s distance. Even the opening line, “Well, I think it’s about time I had a drink,” delivered perfectly with his slight Houston drawl, carries with it an indebtedness to the genre that you can’t help but get sucked into.

But better indicators of the sound Harris was referring to exist at the start and end of LOVE & THE DARK. Opener “The Smoke and the Stars” is a cosmic convergence of melancholy and longing, about as true to capturing both smoke and stars together in country music as one could imagine. His vocals remain measured as the guitar echoes with arena-sized gravitas before he finally breaks, howling “Let me live in those green eyes of yours” as the record slowly fades out. The ache in closer “Grandfather” similarly builds to an otherworldly peak, the avant garde swirl of drums, strings, and xylophones sending the album off with an indescribable amount of bottled emotion.

While Harris can turn a trick or two with more conventional country songwriting, and certainly tracks like “Cussing at the Light” and highlight “Red Room Blues” are among the best true country songs written this year, LOVE & THE DARK is at the peak of its powers when it’s left to explore the genre’s more surreal fringes. With Nashville roughly 2,000 miles away, and his home of Houston but a youthful memory, you can tell LOVE & THE DARK is a Los Angeles country record, if ever there was one. An exploratory melting pot of various sounds ranging from rockabilly (“I’m Afraid”) and lush indie rock crossover (“Giving In”) to Sunday afternoon church ballads (“Blessed Interruption”), all with an undercurrent of that cosmic folk and, yes, alt-country, it’s as unique and interesting as the place he’s lived the last 13 years. All of this isn’t lost on him.

“It’s a niche, for sure,” he says. “But in regards to how I write music and how I put it out, I’m such a melting pot, and L.A. feels really natural to me, I love L.A. It’s an amazing city that has so many different cultures represented, I love that this is a place of discovery and artistic innovation.” At one point during our conversation he raps (well, might I add) part of Kendrick Lamar’s “For Free” from TO PIMP A BUTTERFLY, as if our distance from the country genre’s proverbial true North couldn’t be more apparent.

“A lot of the coolest shit that’s ever come out of any city has come out of L.A.,” he concludes, and I have to stop him briefly—in a conversation that’s had plenty of takes, this is not just one of his best but also his hottest. But his love of the city and its melting pot nature is genuine, down to his decision to meet in Highland Park—a last-minute Hail Mary to avoid the craziness of Echo Park Rising, the cities faux-South By Southwest, where he’s set to play when we finish up. Is there anything more Los Angeles than trying to avoid traffic and parking?

As we wrap up our conversation, the IPAs nearing their finish, we find ourselves (naturally) discussing Tom Cruise, arguably one of the greatest generators of hot takes in modern times. “He’s way better than everyone thinks he is,” Harris immediately says. Somehow both a heel and a provocateur due to his affiliation with Scientology (a fact Harris offhandedly posits may be in 2019 more rooted in blackmail and years of dirt than actual belief in the cultish “religion”) and also one of Hollywood’s last true A-list stars (“He’s an action movie star with chops, not fucking Steven Segall or Jason Statham”), Cruise is a ball of yarn that’s hard to untangle.

“VANILLA SKY fucking rules,” he says immediately with confidence. Artistically it would make sense that Harris would find one of Cruise’s more genre-bending films to be one worth loving, but his clear excitement over one of the actor’s more underappreciated films is delightful nonetheless. We eventually give way to side tangents on the homoeroticism of TOP GUN, the shower scene with Ice Man, the volleyball montage, and eventually to discussing the career of his co-star Val Kilmer—as I learned immediately, Harris’ ability to go from classical music to the Punch Brothers to Bush-era country and the Dixie Chicks on a dime means you have to keep up.

“TOMBSTONE has to be his best role, right?” I ask, confident in my own opinion but secretly hoping I wasn’t missing a painfully obvious role. 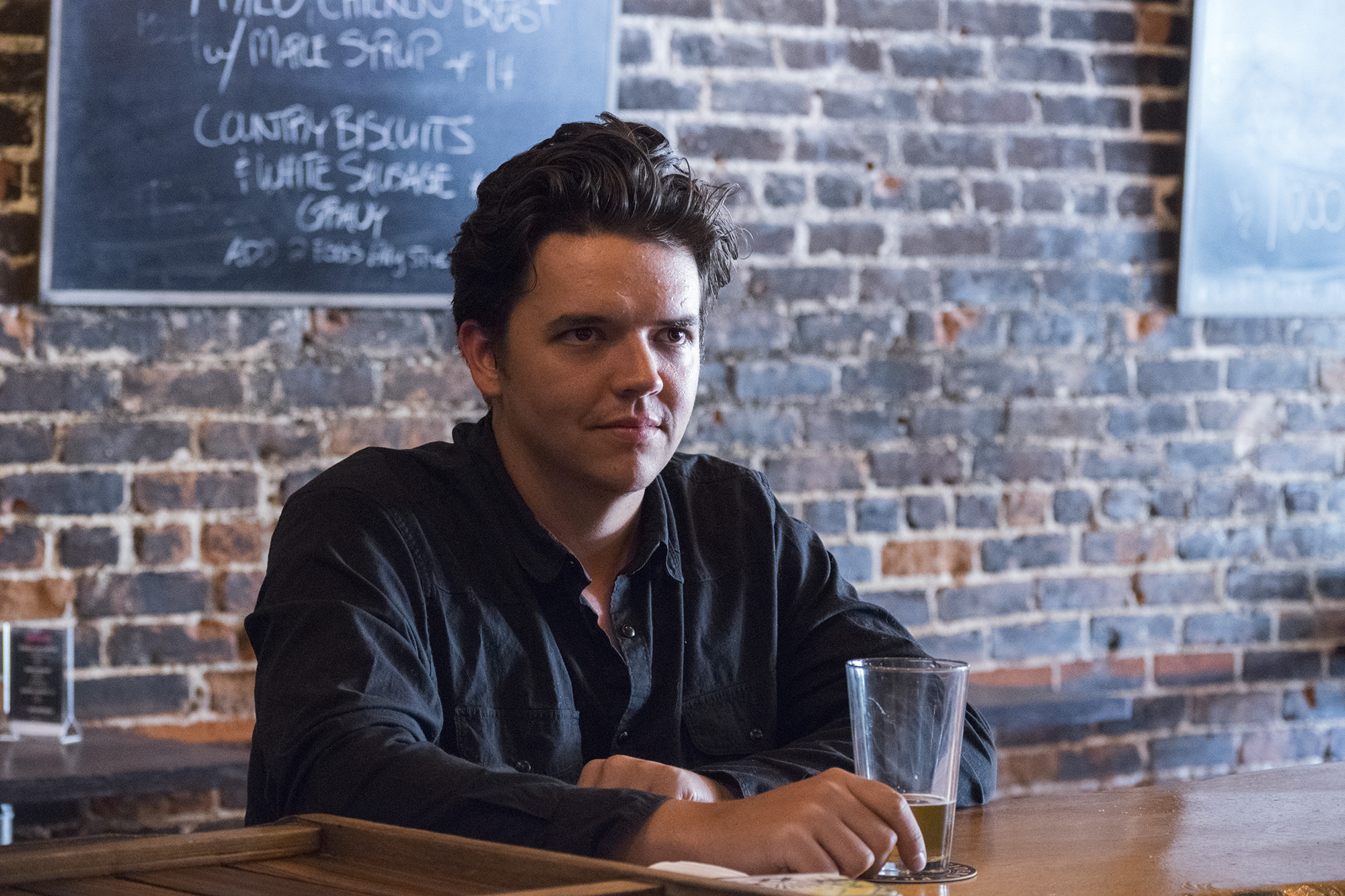 Harris’ Echo Park Rising show goes as about as well as can be planned—a far cry from the empty bar I saw him play years ago in Costa Mesa. He’s wearing the same black button down he’d had on when we parted ways, a bit of summer sweat pouring down his forehead as he rips through tracks most of the audience has yet to be formally introduced to. As he’d text me after the show: “It was a kick ass crowd, I had the luxury of playing in front of a bunch of liquored-up folks,” which is as good an assessment of those attending as any.

He looks the part, to be sure—even my girlfriend leans over at one point to remark she didn’t realize the guy I’d been getting beers with earlier was so handsome. Still, some of the country star mysticism has somewhat faded away for me; he may write songs that capture the loneliness of Townes Van Zandt, but his takes on Netflix’s BANDERSNATCH reveal him to be a pop culture junkie just like you and I, and thus an admittedly excellent partner to saddle up with at the bar. Truly if ever there was a drinking buddy you would want to shoot the shit with, it’s Jason Hawk Harris. He’ll be your Huckleberry.

LOVE & THE DARK is available to stream and purchase now.