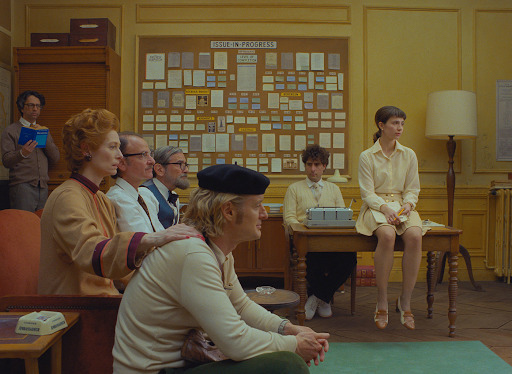 Is the mid-2010s backlash against Anderson’s twee style just residual from hipster backlash, or is it simply a question of personal taste? In our post-ironic cultural climate, have audiences lost their appetite for auteurs, especially earnest ones? I can’t say for sure, but I do know that I’ve been a Wes Anderson fan ever since MOONRISE KINGDOM lit my young teen heart aflame at my hometown’s local indie theater almost ten years ago. Does being a fan of a director mean that I’m obligated to love and defend every single film they put out until the end of time? I don’t think so. THE FRENCH DISPATCH, Wes Anderson’s tenth picture, has been one of my most eagerly anticipated 2021 releases ever since it was pushed back a year due to the pandemic. The film is a self-described “love letter to 20th century magazines,” a three-part anthology depicting the final issue of the titular publication in a fictional French city after the death of its American editor-in-chief, Arthur Howitzer Jr (Bill Murray, who has appeared in every post-BOTTLE ROCKET Wes Anderson flick), based on real life The New Yorker co-founder Harold Ross. Howitzer is a one in a million editor—he’s a good listener, he brings out the best in his writers, and he doesn’t seem to care about making money all that much. At the French Dispatch office, Howitzer is joined by travel writer Sazerac (Owen Wilson), cartoonist Jones (Jason Schwartzman), copy editor Alumna (Elizabeth Moss), among others. Along with an obituary of Howitzer, the final issue contains three republished stories from past editions.

The first story is “The Concrete Masterpiece,” by JKL Berensen (Tilda Swinton), a skewering of the exploitative nature between artists, art critics, and capitalists. Moses Rosenthaler (Benicio del Toro) is an imprisoned, tortured (literally and figuratively) artist who paints an abstract nude portrait of his muse, and a guard at the prison, Simone (Léa Seydoux), which is discovered by Julien Cadazio (Adrien Brody), an art dealer doing some light time for tax evasion. Rosenthaler is hesitant to sell his work, but Cadazio can’t understand why Rosenthaler would create art if not to sell it. The second story, and my personal favorite because of its myriad MASCULIN FEMININ references, is “Revisions to a Manifesto” by Lucinda Krementz (Frances McDormand), about the rise and fall of a student protest led by Zeffirelli (Timothée Chalamet) and Juliette (Lyna Khoudri). The third story, my least favorite, is called “The Private Dining Room of the Police Commissioner.” It follows Roebuck Wright (Jeffrey Wright), Anderson’s smooth-brain version of James Baldwin, as he recounts the story of attending a private dinner with the Commissaire of the police force (Mathieu Amalric), prepared by the legendary Chef Nescaffier (Stephen Park), when the Commissaire’s son, a precocious Sam Shakusky type, is kidnapped. Wright may be similar to Baldwin aesthetically, but the character completely lacks his sharp wit and wisdom.

It would be a reductive insult to everyone’s intelligence to say “if you like Wes Anderson’s style, then you’ll like this one,” because while I love many of Anderson’s films, I left THE FRENCH DISPATCH blinking and disoriented, like a captive after release. I appreciate Anderson’s carefully calibrated choreography and composition, but I was nonetheless disappointed. THE FRENCH DISPATCH lacks the heart of MOONRISE KINGDOM, the physical comedy of THE GRAND BUDAPEST HOTEL, and the meditative melancholy of many of his early films; instead, the film replaces these ideas with an admittedly fine-tuned, but dizzying whirlwind of one-dimensional characters and quirky details that, above any other lasting impression, gave me whiplash. The film’s too short to get to know any one character, or to sit with any one of Anderson’s many ideas long enough to be affected by any of them. I am both too young to partake in Anderson’s nostalgia for a time when print magazines ruled the world, and too old to buy into the idea that it has any deeper meaning. Despite my misfortune of not falling in love with THE FRENCH DISPATCH, I was happy to see it breathe much needed life into the indie cinemas across the country that were lucky enough to survive the pandemic. It’s tough to think about what the prospects for independent cinemas may have looked like if the film had failed commercially: it would seriously suck to be nostalgic for indie cinemas in the same way that people are nostalgic for print media now. 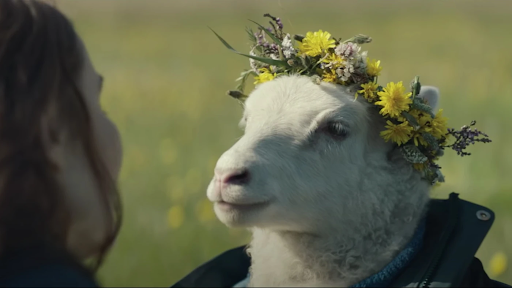 Were you the kind of kid who was introduced to WERCKMEISTER HARMONIES by a video store guy, and then grew up to watch a lot of A24 movies as an edgy teenager? Did you ever consider an intersection of those two entities? Well, first of all, DM me because I think we might have some things in common, and second of all, I am here to tell you that LAMB, Iceland’s submission for Best Foreign Film at the Academy Awards, is the result of this now very real collaboration. The film, executive produced by Béla Tarr, follows Maria (Noomi Rapace of THE GIRL WITH THE DRAGON TATTOO fame) and Ingvar (Hilmir Snaer Guonason), a sheepherding, childless couple in rural Iceland who decide to raise a half-human, half-lamb hybrid creature as if it was their own offspring, with dire consequences. If you’ve heard nothing else about this film, you’ve probably heard about or seen photos of Ada, the titular lamb—she may be a freak of nature, but she sure is cute as hell in her little outfits. Played by a mix of child actors, puppets, and lambs, Ada may be a feat of technical prowess, but an underutilized one, as she only appears about a third of the way into the movie, and even then, fairly sparingly. It’s a sad waste to draw audiences in with a cute, convincing creature, and then barely use it.

What you may not have heard about are the many real-life animal actors that make up the fabric of LAMB—the couple has a cat, a dog, horses, and a whole flock of sheep, which includes Ada’s biological mother, who I unironically believe has given us one of the most harrowing performances of the year. I won’t soon forget the pain in that mother sheep’s eyes as she realizes that she’s powerless to stop Maria from taking her child. The animals may not be able to verbally communicate, but through the language of cinema, they’re able to express their fear and anxieties surrounding Ada’s forced adoption. Of course, this is all thanks to the work of the wranglers, who served as directors in their own right by drawing those raw reactions out of their furry stars. I would go so far as to argue that their direction of the animals is stronger, and certainly more innovative, than the direction of the human actors. LAMB is a genre film, but which genre is up for debate; however, this is more a case of genre indecision than genre subversion. First-time director Validmar Jóhannsson and co-writer Sjón (also co-writer for Robert Eggers’ upcoming THE NORTHMAN) don’t seem quite sure if they want a supernatural horror film about wrathful father nature (as it has been wrongly marketed and classified on Wikipedia), or a heady philosophical meditation on a mother’s grief. LAMB safely skates that line for its entire length, never fully committing to one or the other to underwhelming results for a premise with such imaginative potential.

If anything, LAMB is a tragic folktale that reduces its characters to theater actors with very little agency over their own actions. Maria makes maybe one or two important choices in the film, and Ingvar none at all. Whether you want to call it God or the Devil, a higher power has already written the couple’s fate, so they are safe to act out the play that is their lives, with little room for new or different choices. The idyllic, yet nightmarish, sensory experience of LAMB enchanted me at parts, but wears off quickly, leaving very little to consider in the end. The one shot that sticks out in my mind is not one of the many shots of the foggy, sublime Icelandic countryside, though those shots are vast and gorgeous, but a tighter, more personal mirror portrait of Ada as she contemplates her own sentience, if only for a moment. What is Ada to make of sleeping in Maria’s cozy bedroom while her fellow sheep stay locked in the barn? As she gets older, it is increasingly clear that she’s aware of this divide, but she doesn’t have the communication tools to ask questions. Ada’s inner conflict isn’t explored any further. In her ruinous stead, LAMB favors tired, empty metaphors about religion and climate change. She isn’t the main character. Maybe she should have been.