When peering into the abyss of contemporary horror, we often find that reference and homage seep into the scares. Which, I suppose, isn’t inherently bad. After all, our modern brand of unsettling entertainment is arguably the most interesting it’s been in decades, blending frightful concepts and nostalgia of the past with comfortably benign interest of the present to erode our psyches in… increasingly inventive ways. And, if we were to hone in on a source of inspiration inherently tied to the modern horror landscape, we would find that none stand as iconic as the works of H.P. Lovecraft.

The master of cosmic horror has retained a cult following (ba-dum-tss) and name-brand notoriety for nearly a century, frightening us with tales of morbid intrigue, forbidden knowledge, and the fragility of humanity. However, Lovecraft hasn’t exactly had the best luck translating to other mediums. And, as I was sadly reminded by the recent disappointment that was CALL OF CTHULHU, most games reflect the trend, sacrificing the man’s narrative and tonal nuance for power fantasy and needless spectacle. But as both a gamer and an unabashed fan of the mythos, I feel an obligation to shine light onto that handful of games that rise above the dregs, make up for the duds, and do the writer’s legacy justice. 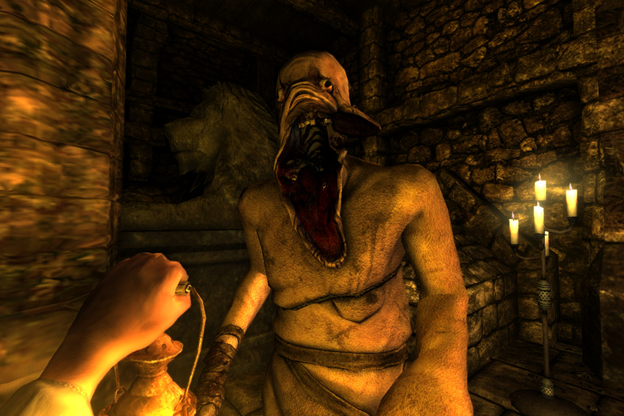 The game that jump-started many a Lets Player’s career (Hell, it’s practically ground zero for the phenomenon) likewise finds a seat at the Lovecraftian table. All the hallmarks make themselves at home within AMNESIA: twisted beings and malefic deities, a sanity system that tortures players with nightmarish visions the longer you inhabit dark areas, and a morbid curiosity towards uncovering what really shouldn’t be meddled with. Additionally, the means of delivering the story through scattered clues, diary entries written by your past self, mirrors the go-to method of Lovecraft’s work and effectively weaves in that additional layer of intrigue. As cliché as this tactic of storytelling may feel due to its overuse the past decade, it still works in tandem with the supernatural tenor of the game to produce an air of mystery towards the narrative and your purpose within it, which is what any good Lovecraft story should do. 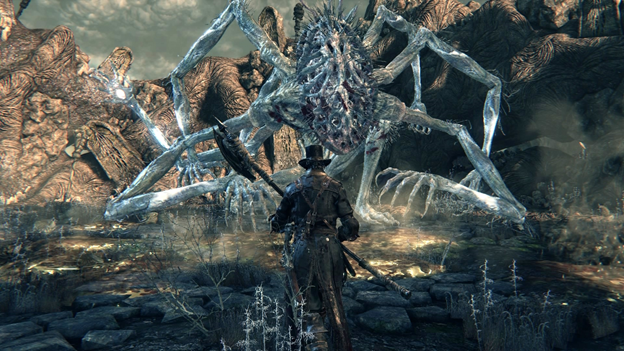 Who would have thought that one of the best understandings of Lovecraft’s worldscape would come from a Japanese action-RPG? There’s a level of poetry to how BLOODBORNE subverts the expectations of players upon their first expedition into the streets of Yharnam. Like the writing it draws inspiration from, the game’s vestige of narrative and overall gothic facade slowly but surely unravels when adversity rears its ugly head. The elements of lurking cosmic horror writhe just beneath the surface, taunting you with brief glimpses into insanity before bursting forth and destroying any semblance of understanding you thought you had. Filled to the brim with FromSoftware’s masterful application of cryptic storytelling, nightmarish dreamscapes to explore, and unyielding eldritch horrors that will disgust and drive you mad just from looking at them, BLOODBORNE displays a healthy understanding of both the aesthetic and thematic components of Lovecraftian terror. 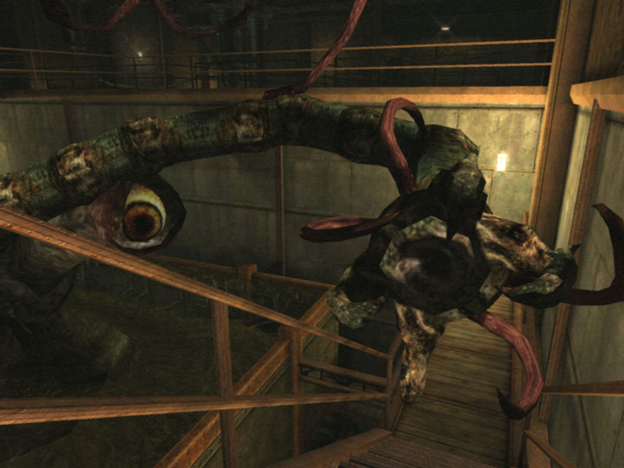 No list featuring Lovecraftian games is complete without one explicitly using the writer’s most ubiquitous story as its namesake, even if it has nothing to do with the game’s narrative. CALL OF CTHULHU: DARK CORNERS OF THE EARTH presents a decently faithful adaptation of a different Lovecraft story, THE SHADOW OVER INNSMOUTH, and merges the author’s affinity for atmosphere with a serviceable amount of FPS action. Additionally, DARK CORNERS establishes itself as one of the only games in this selection that actively utilizes its source material verbatim, adhering to Lovecraft’s descriptions religiously to instill a sense of dread as you explore the secluded town of Innsmouth. And, despite the game’s age, its style of presentation is stellar, demonstrating a slow build towards madness instilled by beings far beyond your understanding. Also fish people. 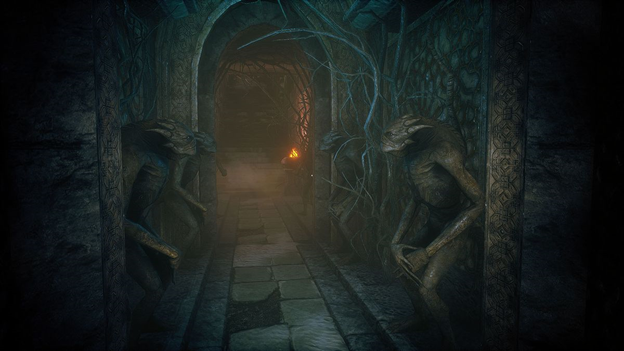 Of all the games mentioned throughout this selection, CONARIUM comes the closest to being an “authentic” Lovecraftian experience. And that may or may not be due to the game essentially being Lovecraft: The Walking Simulator. Zoetrope Interactive’s unofficial continuation of AT THE MOUNTAINS OF MADNESS faithfully displays a Lovecraft story’s best traits: a short but unsettling foray into the macabre, projecting players through a state of helplessness as they explore the remnants of the Upuaut Antarctic base and what lies beneath it, attempting to piece together what exactly brought you there. And for what CONARIUM may lack in terms of length or traditional gameplay, it more than makes up for with pure mystique and a refined sense of immersibility into its world. Just remember, Cthulhu fhtagn. 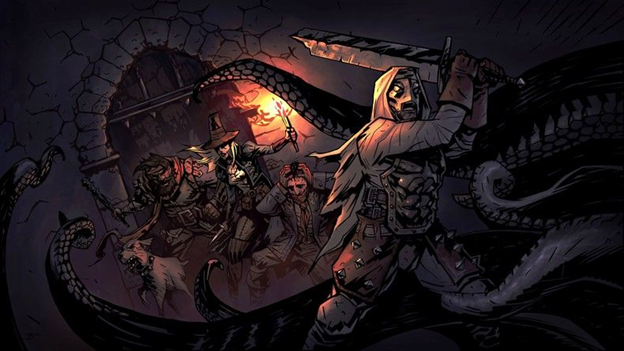 This dungeon-crawler’s premise is simple: your ancestor has unearthed an ancient and unspeakable evil, and it is now your job to stop it, pushing back the unnatural scourge plaguing your inherited estate by chucking as many hapless adventurers at it as you can. Yet doing so is no easy task; exploring and combating these antediluvian threats will cause your adventurers to accumulate stress with every encounter, develop quirks, and potentially succumb to madness or even die from heart attacks. While not explicitly a horror game, DARKEST DUNGEON absolutely exudes the foreboding atmosphere that is paramount to the Lovecraftian aesthetic. Plus, it doesn’t hurt having the “voice” of Lovecraft, Wayne June, to really drive home the melancholic tone with his expert narration and auditive gravitas. 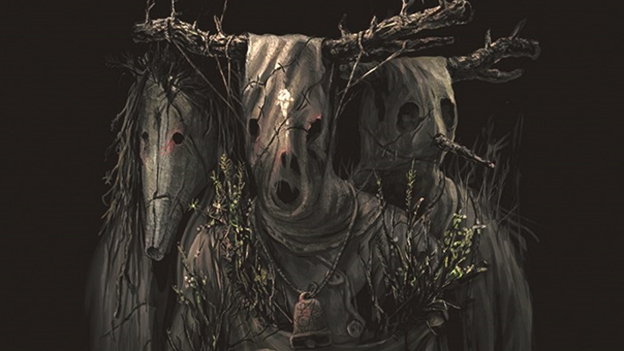 There’s generally two main issues that plague video games when it comes to adapting Lovecraft’s work: a reliance on shocks over the cerebral to elicit a reaction, and the need for the player to feel powerful by being able to kill the monsters. DARKWOOD does away with both of those notions, opting instead for earning its scares purely through purposely scant ambiance and building off our discomfort when faced with the unknown, while also making the player feel infinitely more fragile than just about any other thing (person or otherwise) you come across. Likewise, that factor of the unknown applies itself to the game’s story; we never really understand why the titular “dark wood” is as otherworldly as it is, or why its denizens teeter on the brink of insanity. Yet, that lack of clarity is enough to guide our imaginations towards something much more terrifying than anything that can be put in front of us. If that isn’t cosmic horror, I don’t know what is. 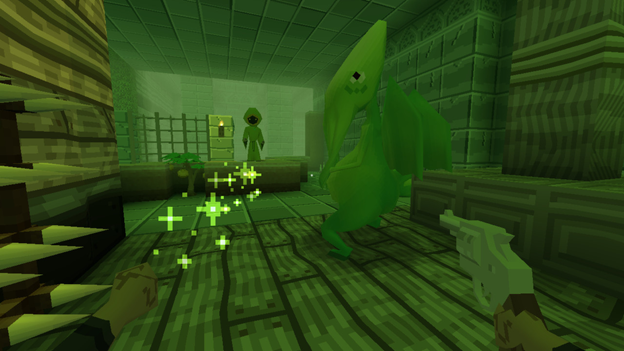 ELDRITCH is a peculiar addition when compared to the other selections on this list. Like many of the horrendous abominations that comprise the Cthulhu mythos, ELDRITCH is a patchwork of familiar elements forced together in an ungodly manner, to the point of confounding one to ask, “Why does this work?” This amalgamation features dungeon-crawling, roguelike elements, simplistic presentation, and aesthetics signature to any cosmic horror homebrew. While not a hardcore-adherent to the serious nature of Lovecraft’s work (at least I don’t think punching penguins was of mass appeal in the 1930s horror scene), the dichotomous relationship between the art style, humor, and morbid subject matter manages to strike a happy medium between enjoyable and disturbing, in addition to representing Lovecraft in an inventive and digestible manner. 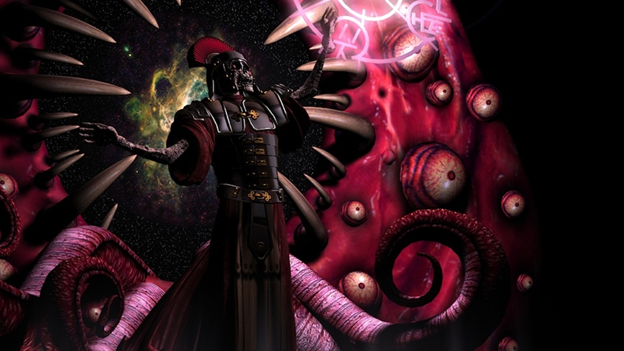 Considered by fans to be Lovecraft in everything but name, ETERNAL DARKNESS is arguably the first and best showcase of how cosmic horror can be presented through this medium. The narrative follows heavy cues by its writer’s own admission, toying with the scenario of a normal woman becoming entwined in the matters of unfathomable, ancient beings, and having her resolve tested through nightmarish circumstance. However, where the game truly cements itself as in-tune with the Lovecraft brand is its sanity system, one that has garnered both praise and infamy. The system shines not only in how well it demonstrates the protagonist’s loosening grip on reality, but also in just how much it will break the fourth wall to fuck with the player’s sense of control. While it’s one thing to be scared by monsters in the dark, it’s a completely different kind of terror to read a notification that the game is scrubbing the save data from your memory card. Though it isn’t widely available, I would suggest any fan of horror try to experience this gem.