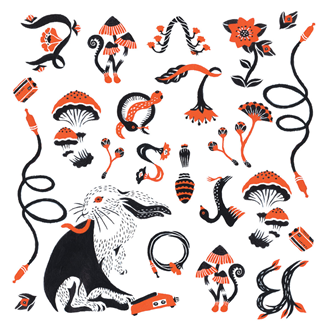 Boris is still my favorite band of all time and while LΦVE & EVΦL is definitely a solid outing, perfectly fitting in their intense and impressive catalog, it’s probably the last album I would recommend to a newcomer of their music. All the essential ingredients are here: Wata’s thunderous lead guitar, Atsuo’s insane drumming, Takeshi’s smooth vocals and double-neck bass/rhythm. Yet the album is so deeply entrenched within its atmosphere that for the uninitiated it may seem like way too much to take in. During the long drone metal segments, of which there are plenty this time around, Wata’s oppressive guitar walls fold and wrap into themselves, forming tunnels of distortion that are seemingly endless. The tracks “uzume” and closer “Shadow of Skull” are standouts, sounding heavier than ever while also toting substantive length, clocking in at 8:32 and 11:23, respectively, and those doesn’t even come close to the longest track on here. This is of course a dream for fans, but maybe a nightmare for others. First-timers should first try going for Boris’ classics from the late ‘90s/early 2000s or, if desperately in need for more recent fare, try DEAR. [Alec Larios] 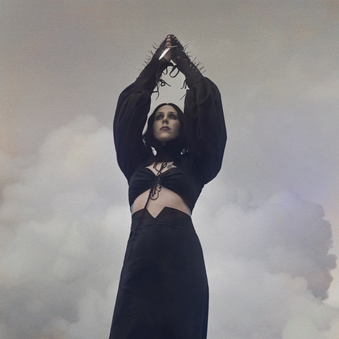 Chelsea Wolfe has been at her most compelling when conjuring the primordial, almost mythical underbelly of creation and society on songs like “Carrion Flowers,” and especially “Iron Moon.” I tune out hard whenever she discusses tumultuous relationships and anxiety disorders, which never matched the doomish, metallic tones and towering instrumental presentations on her last two albums, undercutting their sizable musical weight. So an album with this title—BIRTH OF VIOLENCE—along with a return to her ambient, gothic folk roots, which would hopefully maintain what worked on HISS SPUN and ABYSS, intrigued me. Sadly, it’s hard not to see BIRTH OF VIOLENCE as the safest and most nondescript record of her entire career, gliding to mediocrity off of Wolfe’s talent rather than any gripping performance.

Don’t get me wrong, it’s gorgeous and beautifully layered, with squeaking, pleasant acoustic guitars over haunting atmospherics with occasional crackling distortion or harsh, sustained synthesizers that don’t quite have the pulse of PAIN IS BEAUTY, but are still effective. However, the structure of many of the tracks are too similar and the lyrics can’t decide between fragmented imagery that is too scant to coalesce and blunt proclamations that often undercut any slight sense of ambiguity. “Be All Things” and its themes of how much society demands of women starts off strong with the line, “Walking the old path turned me towards death,” but the hook is too basic and underwritten to inform us of what the new path will be, and the second verse does not help with lists of somewhat feminine symbols that are too scattered to mean anything. Similarly, “American Darkness” could have cut so much deeper with its story of a soldier’s wife waiting for his return, only to throw it all away with the repetition of the uninteresting line, “Won’t you dance?” While she’s certainly earned a break from boundary-pushing and innovation, streamlining and going back to basics only works if you’ve got more interesting subject material than the moral-purity-hating hedonism of the closer “Highway,” and especially the tired “Deranged for Rock N’Roll” that is not deranged and certainly not rock. It’s pretty to listen to, I cannot stress this enough, but it gives no reason to go back to it or commit it to memory. [Blake Michelle] 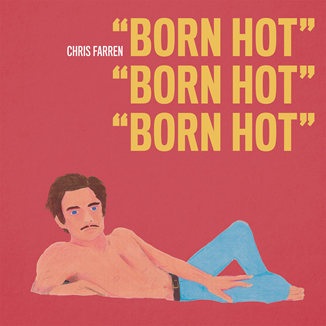 Reviewing a Chris Farren album at face value is a weird task to take on. Every musician’s work is altered by the meta surrounding their own reputation and personal lives to some extent, but few are as playful with that concept (especially in the DIY/punk sphere) as Farren is. Put another way, his music doesn’t land the same way without some knowledge of his performance and online persona (and vice versa), a deliberate set of contradictions between outsized bravado that lampoons a specific type of narcissistic and self-aggrandizing male pop performer that has (and continues to be) peppered throughout music, and expressions of intensely internalized self-doubt and anxiety. Farren’s musical persona would not work without both, and while some artists who attempt a similar schtick try to distance themselves from the characters they inhabit onstage and in their music, there’s no part of Chris Farren that feels insincere.

What might be most impressive about Farren’s musical work is the unique way in which he has taken “DIY” in the most literal way possible—BORN HOT is self-produced and consists almost entirely of Farren’s own instrumental and vocal work. Farren’s live shows are solo shows accompanied by projections and album stems that don’t miss a beat from a more traditional full-band setup. Throughout BORN HOT, synths and drum machines are paired with bright guitar sounds to create a sugary and upbeat synth-punk sound that plays against Farren’s lyrics, which are frequently not nearly as cheerful as their accompaniment. The record’s best song, “Love Theme from Born Hot,” bucks that trend a bit, borrowing from schlocky love songs of old while still incorporating Farren’s outstanding ability as a songwriter to create tension between his lyrics and music—in “Love Theme,” Farren sits in a moment that feels less than perfect and uses it to reflect on the love he expresses in the song. Lead single “Search 4 Me,” as well as “Flourit de Maga,” are particularly standout examples of songs that live and thrive in this duality. More earnest and ballad-y moments do appear, such as “Too Dark,” a song that is both lyrically and musically reminiscent of Swedish songwriter Jens Lekman, and a lovely closer in “Credits,” but it’s rare for such an emotionally heavy album to move as BORN HOT does. Even without embracing the on-stage character that he manifests, BORN HOT is a blast, but ultimately it will work the best for those who care to fully dive into the Chris Farren-verse—his combination of social media savvy, visual art, and music skills easily make him one of the most interesting people in music. [Adam Cash] 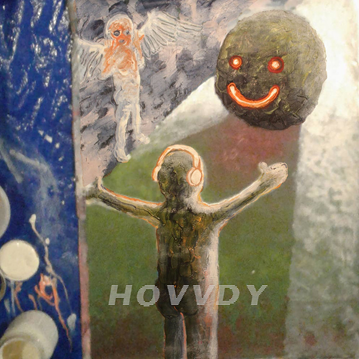 “Howdy,” besides its adoption as the catch-all phrase for the millennial cowboy generation, is a contraction of the quaint greeting, “How do you do.” The Austin-based “pillow core” duo draw it out just a moment longer with their spelling, but that subtle drawl permeates their newest album, HEAVY LIFTER—polite, thoughtful, and achingly wistful. While carrying a similar nostalgic energy as their sophomore effort, CRANBERRY, HEAVY LIFTER trails off in a slightly new direction. “Mr. Lee” and “Ruin (my ride)” experiment with canned drum tracks, and standout single “Cathedral” reaches fresh heights with its ruminating lyrics: “Maybe never come back here / We could stay with our friends / Maybe never come back here / Baby we better hover.” The entire album conjures the gold-flecked memories of youth, with the melancholic feelings mixed into each tableau. There’s none of the “get me out of here” mentality so often associated with growing up in suburbia, no frustration or resentment. In short, HEAVY LIFTER is excellently the opposite of a punk album. [Claire Epting] 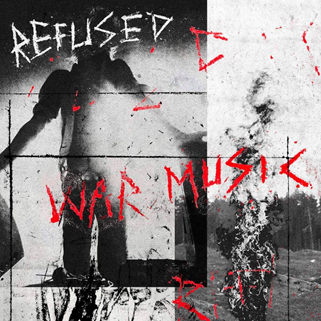 What’s the most disappointing album of the decade? For those into heavier punk and metal, Refused’s FREEDOM has to be up there. Even if I find it a little too indulgent to fit into regular rotation (and I’ve always been disappointed that THIS JUST MIGHT BE THE TRUTH and SONGS TO FAN THE FLAMES OF DISCONTENT get overshadowed by it), I can’t deny the bravado, ambition, and influence of their third record SHAPE OF PUNK TO COME, with its lengthy samples and furious, dizzying playing. There was likely nothing these Swedes could have released after a 17-year hiatus that would have pleased anyone, but they could have tried harder than the laughable child choir on “Francafrique” and ghostly female backing vocals on “Dawkins Christ” and “Destroy the Man.” SHAPE OF PUNK got away with its genre-blending and electronic flourishes because it maintained its intensity and defiant punk spirit; if FREEDOM had the solid compositions of Machine Head, the wildness of System of a Down, or the wit of Faith No More, it could have worked, but the conventional production has aged remarkably poorly and the record was unintentionally laughable in too many spots to be excusable.

WAR MUSIC, on the other hand, is much less interesting to talk about, and critics at large are trying way too hard to make it into SHAPE OF PUNK 2.0. I’m here to say: It’s nowhere close, and there’s nothing wrong with that! Refused are still a great punk band with a charismatic, dynamic lead singer in Dennis Lxyzén and killer post-Fugazi grooves and shredding. It’s still got some of the same problems as FREEDOM: the acoustics are weirdly brittle and clipped, some of the clean singing is eerily similar to AFI’s Danny Havok in the worst way, and it’s entirely unsurprising that the drums were recorded at a different time than everything else, especially the tinny percussion and flat kick drum that ruin the otherwise fantastic “Turn the Cross” and the cavalcade of cymbals that sit on top of the mix on the hook of “Death in Vännäs.” However, the production is more hearty and raw, which fits with blunter lyrics that know the perfect moment to repeat themselves and have just enough searing wit and clever turns of phrase to stick with you. The righteous, uncompromising, confident-of-their-inevitable-victory fury of lines like “Without the shedding of blood there won’t be forgiveness” and “Final gasp of a dying breed / Coarse attempt by petty men to control the feed” is refreshing and impressive for a punk band 28 years into their career. Even as it treads the same ground as FREEDOM by squeezing their symphonic and electronic flourishes and math rock-level playing into a conventional rock structure, it’s a vastly superior retread that proves they did not blow their load 21 years ago and still have quality left in them. [Blake Michelle]