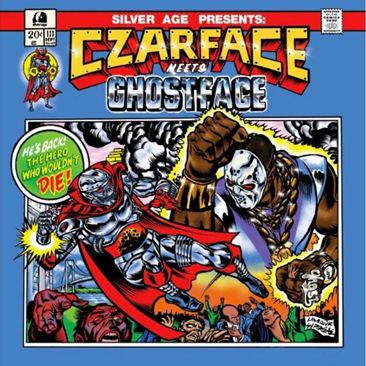 The 12-track, 39-minute record is a collage of raw, vexatious verses with more Marvel namedrops than the actual MCU. CZARFACE, the illustrious joining of Bostonian production duo 7L and Esoteric and Ghostface’s bandmate Inspectah Deck, continue their collaborative saga of comic-themed albums filled with cartoon samples atop epic old school beats. Opening skit “Back at Ringside” sets the scene for this war of the words by announcing the competitors as if  they were fighters being introduced at a boxing match before slamming into the first bout of “Face Off,” where a steady flow of punchlines, metaphors, and double entendre by Ghostface, Inspectah, and Esoteric allow each to stand on their own.

While the lyrics of the album are not direct hits at the competing artist, they mostly serve to build clout and prove overall wordplay mastery. This is not to say the album does not make its share of cultural arguments—on standout track “Powers and Stuff,” the nerdy media references take on a political tone within bars such as “We bear arms, burners like Battlestar Galactica. Prison mentality, we do more dirt than (Attica).” All this plays out over samples of excited children screaming “Czarface has got the powers and stuff” like it’s a catchphrase being told to their favorite superhero. Meanwhile, back at the Czarcave, “Morning Ritual” is a comical yet intimate account of how Ghostface and Esoteric get ready in the morning with the scenes laid out in almost too much detail: “Then I made it to the bathroom, boner all in my sweats. Sixty-second piss, felt like more like a nut.” That kind of kinetic energy continues on throughout the album with tracks “Super Soldier Serum,” where Ghostface is able to compare himself to a slew of famous movie spies before a rhythmic breakdown in the vein of a villain’s theme song. That’s all before leading single “Mongolian Beef” and album closer “(Post Credits Scene)” make room for the emcees to close out the record with a final batch of POWS!, WHAPS!, and ZINGS! In their own fashion. (By the way, the CZARFACE aesthetic also makes for some killer socks launched by Arvin Goods in collaboration with the group just in time for the album.) [Michael Stanziale] 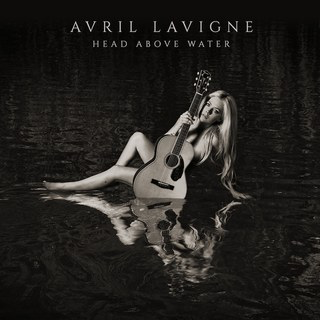 Favorite Tracks: “Head Above Water,” “Then It’s Over”

Hell yeah I owned LET GO and UNDER MY SKIN and cut my angst on listening to “Nobody’s Home” alongside Staind’s “So Far Away.” Hell no I don’t know what Avril Lavigne’s been trying to do for the past dozen years. In between producing a bizarre ode to her inexplicably massive Japanese fanbase (LET GO is the 12th best-selling album from a foreign act there) and horribly misguided attempts at sexual chemistry with Marilyn Manson that was the most mismatched in pop music until Nicki Minaj and 6ix9ine, she’s never been able to decide if she should try to grow up and mature or stick to bratty, in-bad-taste, youthfully reckless pop in the vein of “Girlfriend” and “What The Hell.”

The majority of HEAD ABOVE WATER tries for the former, which isn’t surprising given her recent bout with Lyme disease, but it’s hampered by painfully banal lyrical choices and an absence of focus. The title track became a surprise hit on Christian radio, and while that song mostly works as a confident, forceful anthem that showcases Avril’s pipes, it’s followed by four baffling songs that perfectly illustrate Avril’s schizophrenic career post-UNDER MY SKIN and why HEAD ABOVE WATER doesn’t work. “Birdie” and “I Fell in Love with the Devil” feature the most obvious metaphors in Christian music, with the former resembling “Bird with a Broken Wing” from Owl City’s MOBILE ORCHESTRA, another Christian-in-everything-but-name pop album from an artist who didn’t know what to do with themselves as they aged since their youthfulness was their defining trait.

Then we get “Then It’s Over,” a stab at Motown soul that she actually sounds decent on, even if it’s comprised of trap skitters and bears no resemblance to anything else on the record. But it’s quickly overshadowed by “Dumb Blonde,” a horribly dated fusion of the demonic, stomping cheerleader chanting of “Hollaback Girl” and the spastic, dated electro-pop and horrible insecurity of “Bitch I’m Madonna,” right down to an apathetic Nikki Minaj verse. The rest of the record’s love songs and inspirational ballads breeze by, with the exception of “Goddess” and its tale of a dude utterly worshipping her, which might have worked if it wasn’t paired with earnest, squeaking acoustic guitar that clash with goofy lines like “He thinks I’m sexy in my pajamas.”  Honestly, I don’t suggest this often, but she should have doubled down on the success of the title track and made straight Christian pop that might have been bland, but she would at least have the personality and bombast to stand out. I’m very happy for her recovery and triumph over Lyme Disease, but just because something is personal doesn’t mean it’s useful, and it’s hard to be personal when working with so many additional writers and producers that result in an album that’s either scattered or embarrassingly basic. [Blake Michelle] 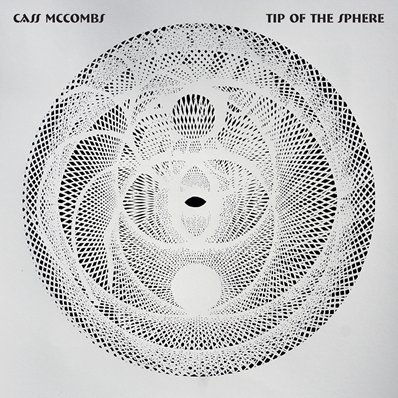 Cass McCombs – TIP OF THE SPHERE

Favorite Tracks: “I Followed the River South to What,” “Estrella,” “Prayer for Another Day,” “The Great Pixley Train Robbery”

The indie rock world has been overtly enamored with the work of the Grateful Dead for about five years now, and that trend seems to be coming to a head in early 2019. On TIP OF THE SPHERE, Cass McCombs proves that he might be the best Jerry Garcia impersonator of the bunch. McCombs has been a slippery artist in terms of genre throughout his career, and this trend toward lengthy, loose structures and rootsy melodies feels like a natural follow-up to the jazzy experiments found on MANGY LOVE. The song with the best chance of catching on in the mainstream here is “The Great Pixley Train Robbery,” a bizzaro crime narrative centered around a simple power chord progression and jam band guitars that would satisfy most casual Americana-adjacent music fans. Even if there’s a strong jam influence here, though, this is not at all a jam record, and McCombs’ natural ability to work interesting harmonic ideas into his music keeps it from getting stale as a jam record would. And of course, he’s as lyrically compelling as ever. When it’s all said and done though, it’s hard to say that this record really jumps out as something that will stick to one’s ribs in the same way MANGY LOVE did, but TIP OF THE SPHERE is perfectly competent and in every respect, very good, but may not grab folks who aren’t previous fans of McCombs and his stylings. [Adam Cash] 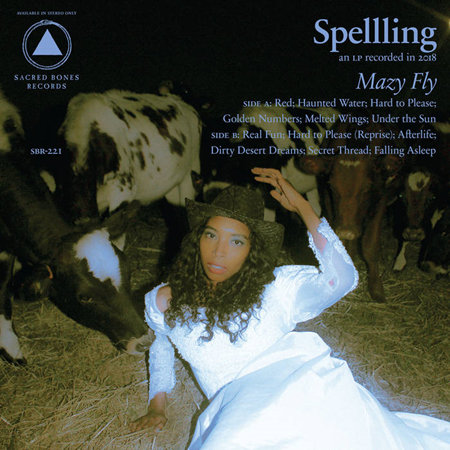 Mattress salesmen love to remind us that we spend one-third of our life sleeping. “Thirty-three percent is a huge number! You don’t spend that much time doing anything else,” they’ll say, conveniently ignoring the fact that two-thirds makes up a much larger chunk of the pie. Why not splurge? Go ahead, spend multiple rent checks on a mattress. After all, what use is your apartment if you sleep on the floor. But most of that time is spent unconscious, and a cheap one does just fine. The dreams, much like MAZY FLY, fade from your memory mere moments after their conclusion.

Spellling’s second full-length cooks up that same neurochemical soup our brains produce at night, but the result is bland, formless, and puzzling. Most of the tracks, while polished, read more like demos than complete songs. Even the strongest starters like “Under the Sun” or “Hard to Please” offer little in the way of pay off. They either wander around like a child lost in a forest or dig a deep rut and sit still for a few minutes. Gothic synthesizers are a recurring sonic motif, but fail to dazzle like their 510 counterparts Them Are Us Too. Chrystia Cabral’s percussion could stand to be a few degrees more prominent, especially since the few times it takes center stage account for the most engaging flashes on the record. “Hard to Please (Reprise)” is an entirely unnecessary re-hash of a forgettable cut, but it does contain the album’s crispest percussion, a cruel glimpse into what could’ve been a much livelier and compelling work. Ultimately, MAZY FLY’s broad blemish is its refusal to execute, consistently probing at genuinely innovative concepts without diving head-first, leaving weak ripples in its wake when it could’ve spat crashing waves. [Ryan Moloney] 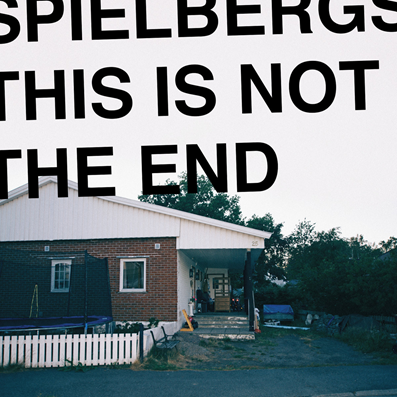 Spielbergs – THIS IS NOT THE END

The name THIS IS NOT THE END is, perhaps, a bit presumptive for a band whose members’ musical careers have been filled with plenty of stop-gaps and failures. When their excellent DISTANT STAR EP dropped last year, I think there was a collective curiosity as to how exactly sustainable Spielbergs’ sound would be—even if the Ian Cohens of the world found it (inarguably the band’s target demo), history shows us it’s hard for this sound to be a long-term commodity, especially for musicians who had such up-and-down success in other acts; it’s certainly not hard to imagine DISTANT STAR being a relic holdover of the celebration rock that saw a brief heyday at the beginning of the decade. THIS IS NOT THE END makes sure to establish that this is, in fact, not an end, rather a natural continuation of what came before, featuring two of last year’s EP’s standout tracks, “Distant Star” and “We Are All Going To Die.” On their proper debut, Spielbergs spread out that swirling bar rock into other sounds and styles to mostly effective results. While these rousing, fist-clenching anthems remain hyper-focused, the songs spill off into more obvious adjacent comparisons, like No Age’s feverish noise rock (“NFL”), Built To Spill’s tireless, bass-heavy gallop (“Forevermore”), or Bradford Cox’s wandering, splintery, and fearlessly minimal guitar work (“McDonald’s [Please Don’t Fuck up My Order]”). All of these points of comparison are, obviously, going to sit almost too well with a certain brand of indie rock fan and, just like DISTANT STAR, the songs on THIS IS NOT THE END are almost purposefully exuding a kind of exciting emulation of sparkling 2000s rock music while grabbing your hand as if to say “Yes, we liked this music too, and you are not alone.” THIS IS NOT THE END, especially with its tie-ins to the previous EP, naturally feels less special—the genre-hopping, as slight yet distinct as it may be, is perhaps a bit forced at times, especially on twinklier speed bumps like “Familiar” or “Sleeper,” and this sound almost always functions better with shorter album times. But find me a hopeless youth rally as solid as “4 AM” or a punchy death march as fiery as “We Are All Going To Die” being made in 2019, because that’s what you’re coming to Speilbergs for, and they yet again deliver. [CJ Simonson]

ISN’T IT ROMANTIC? Yeah, I Guess.