Nintendo’s E3 Direct was short, to the point, and yet somewhat disappointing. The gaming powerhouse, for the most part, has always kept its Direct presentations concise and well paced, and certainly this year was no different. Over the 40 minute presentation they ultimately touched on 25+ games, most of which were naturally sequels, remasters, DLC,  or games currently available for the Switch. It’s important to note: Nintendo does not limit its announcements to E3 exclusively. In fact, in the past year alone they have had three full Directs and a handful of Direct Mini’s, their way of keeping their own hype train moving through twelve months out of the year.

A massive Nintendo fan myself, despite more than a few points of interest throughout the presentation, I found myself questioning why some of this content was being discussed at an event as historically significant as E3, especially compared to their peers’ presentations. Even with the Directs, it still felt like Nintendo was taking an approach of throwing everything at the wall and seeing what sticks, with the sheer number of announcements and presentations in such a contained amount of time. Ultimately you can highlight the E3 announcements in two important points: there was a new BREATH OF THE WILD 2 trailer with glimpses of gameplay, and some very popular and some lesser known franchises are getting funneled to the Switch—and that’s okay.

Being Nintendo’s fourth highest earning franchise, it makes sense to start out with a little Super Smash Bros Ultimate news — unfortunately that news was not the arrival of Waluigi. The 81st (yes you read that right) fighter added to SSBU is Kazuya, the first character from the Tekken series to make an appearance. Kazuya will join the ranks of Ryu and Little Mac as a straight up fists and kicks fighter. Overall a disappointing start to the presentation with the notable exception of the humorous interaction between Kazuya and Kriby at the very end of the trailer.

LIFE IS STRANGE, DONTNOD Entertainment’s critically acclaimed series, was previously unavailable on Nintendo consoles. The game focuses on a student named Max who has the ability to rewind time, which ultimately has players dealing with the Butterfly Effect and thinking about how their changes will change future opportunities. The trailer itself is beautiful and the music is haunting, enough to make an unfamiliar Nintendo fan curious. This release includes both a Remastered Collection which is a rerelease of the first two games of the series, and TRUE COLORS, the recently announced fifth installment.

While not the anniversary remaster most folks would want Nintendo to focus on, the Super Monkey Ball franchise truly is a perfect fit for the Nintendo Switch. BANANA MANIA is a remaster and redesign of the first three games of the series. Certainly in an era where video games are heavily driven by nostalgia, paired with the decent gyroscopic controls of the Switch, this is the perfect game to remaster. It’s simple, intuitive to play, and safe for all ages. But Nintendo could put more emphasis on other parts of the collective back catalog.

Essentially MARIO PARTY Remastered Lite, MARIO PARTY SUPERSTARS consists of five boards and 100+ updated mini games, all from games originally released on the N64 (and potentially other Mario Party games, though it’s unclear). The style of gameplay shown is identical to that of Super Mario Party which had me questioning why this wasn’t just a DLC expansion for that game.

Shinya Takahashi oddly starts out his introduction of METROID PRIME DREAD with a brief non-update mentioning METROID PRIME 4, a game originally announced back in 2017, before quickly sidestepping to talk about DREAD, an entirely different unannounced game in the series. DREAD returns Metroid Prime to its original 2D roots with the appropriate side scrolling jump and shoot mechanics, updated graphics, and what seems to be some fancy new features. The slick trailer primarily focuses on cinematics, but shows snippets of gameplay throughout. That being said, more was shown during Nintendo’s Treehouse Presentation. This was also the first and only time Amiibo’s were mentioned in the 40 minutes, Nintendo’s oft forgotten toys-to-life platform — a Samus and EMMI (the antagonist of the game) Amiibo will be released simultaneously with DREAD. Neat.

Only 10 days out, the amount of time we have to wait for the newest addition to the Mario Sports family made the inclusion of a trailer a bit surprising here — most of the information was either known or assumed based on previous trailers and presentations, with the only new takeaway being the announcement that this game will receive consistent updates (more courses, more playable characters) moving forward. Again, neat.

WARIOWARE: GET IT TOGETHER

GET IT TOGETHER is somehow the ninth game in the WarioWare series, a franchise based on what they describe as “MicroGames” that are simple to understand and need minimal instruction. GET IT TOGETHER is the first cooperative game in the series allowing players to team up to achieve the goals (previous iterations allowed control handoffs but never combined play). The main notable difference is the concept of characters here. WarioWare has always had zanny and wacky characters in the background, but now many are playable, with each containing a special ability. From throwing stars to a tractor beam, how you beat the Microgame is up to you.

RE-BOOT CAMP, if the way this article has gone isn’t a good indicator, is a remake — and I can’t bring myself to say remaster. The new graphics highlighted in the reveal trailer show the gameplay has moved from simplistic to disappointingly cartoony. The Advance War franchise were some of my brother’s favorites growing up (shouts to WARGROOVES, a fun Advance Wars jag out on GamePass), and his reaction perfectly encapsulates my feelings toward the trailer: “If it is just a remake of the first ones, why would you not just port it over more directly, why does it look uglier now?” ‘Nuff said.

The Legend of Zelda Franchise

The Zelda franchise naturally received quite a bit of attention to close off Nintendo’s E3 presentation, perhaps not surprising given the series’ 35th anniversary. To kick things off they discussed the HYRULE WARRIORS: AGE OF CALAMITY expansion pass, which comes out in a few days. The expansion pass includes two waves, including new challenges, new weapons, and new playable characters.

They then rolled straight into footage from the HD remake of SKYWARD SWORD, although nothing new from what was shown in the February Direct. What followed was the only “hardware” announcement we saw from Nintendo. The New Legend of Zelda Game & Watch, featuring the original LEGEND OF ZELDA, LEGEND OF ZELDA 2, and LINK’S AWAKENING, something collectors will definitely llook forward to.

And then, finally, the moment we have been waiting two years for: a BREATH OF THE WILD 2 update!!

The new trailer shows an updated look at Hyrule following the end of the last game. The music and cinematics are absolutely beautiful — it’s genuinely everything you would want from a Zelda trailer. The minimal gameplay shown hints at new features and enemies, and potentially some new mystical weapons. The biggest takeaway though was the changes coming to Hyrule, floating islands reminiscent of Skyloft fill the distant skylines and Ganon’s castle rises from the ground. I was left hyped and desperate for more information. Nintendo could have shown nothing else for 40 more minutes and been fine. My words cannot do the trailer justice, Just go watch it now. 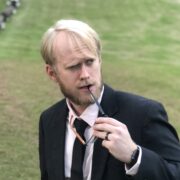 Danny Simonson
Danny Simonson was in the top 1% of TRAILER TRASHED fans. Nepotism had nothing to do with his writing for the site.