Unlike other art forms, the effort of origami is frequently visible to the untrained eye. You can see the folds and creases. How paper gets bundled up and curved, the force of fingers and hands exerted and captured in the material, directing it into a new shape. Origami is a global art form, but the earliest instances of it have been traced back to Buddhist monks in Edo Period Japan. Origami started as a ritualistic practice, used to decorate shrines and commemorate weddings and was then adopted by the Shogunate and incorporated into samurai gift culture. It’s gone through many permutations with many techniques adopted and discarded, but the basic practice of starting with one piece of square paper and transforming it into something else has remained the same.

Beyond nostalgia and the comfort it affords, Mario has a one-of-a-kind charm. The odd, almost surrealistic combination of disparate elements that make up the strange and ever-expanding Mario universe is present in both its broad cast of characters and its settings real and virtual. The fact that Mario can be anywhere and do anything (tennis, kart racing, competing in the Olympics) as long as he’s styled as a sort of underdog and working hard (his visual coding as a “plumber” has been doing this heavy lift since at least 1981) is the other major component. The straight man to the game world’s wild antics. In a crowded arcade or a well-stocked toy store those eye-catching elements not only stand out visually, but immediately beg the question: what do turtles, living mushrooms, princesses, and a variety of different skeletons have to do with this little red man?

The extended Mario universe is so large that this isn’t even the full cast.

The answer is simple: these are just some of the many obstacles standing between that red man and a princess in a castle on the other end of the level. This simple arrangement would come to be a kind of Nintendo signature. No matter how complicated the mechanic or layered in detail the world or story, the interactions required of the player are almost always immediately understandable. In most cases, make it from one side of the level to the other. That wacky surrealist cover is painted on a 2D game a man drew on graph paper. Legibility and understanding are just as important as fun. The basic side-scrolling Mario setup is the “paper” on which all variations and spin-offs are built.

Decades of having a plumber and his brother face off against a giant turtle dragon can get stale. Enter the millions of spin-offs, sports-related and otherwise, of varying quality and popularity. Here, new life is breathed into the basic Mario setup while still celebrating the things that made the character, the character. The most exciting of these genre experimentations are when Mario gets reimagined as an RPG, most famously and successfully in the Paper Mario series. Paper Mario is like normal Mario…except made of paper. Everything in the overworld and the individual levels of a Paper Mario game are made of paper using papercraft techniques of layered and bent sheets and glue. Instead of platforming past enemies, the player engages in turn-based battles, reimagining some of Mario’s core abilities (jumping on people and breaking things with a hammer) into turn-based moves to be deployed alongside recontextualized mushrooms, Fire Flowers, and the like. With PAPER MARIO: THE ORIGAMI KING that playful spirit is married with a similarly bubbly take on the story, underlining again and again the absurdity of the Mario status quo while also unintentionally providing a perfect metaphor for Nintendo’s franchise as a whole. 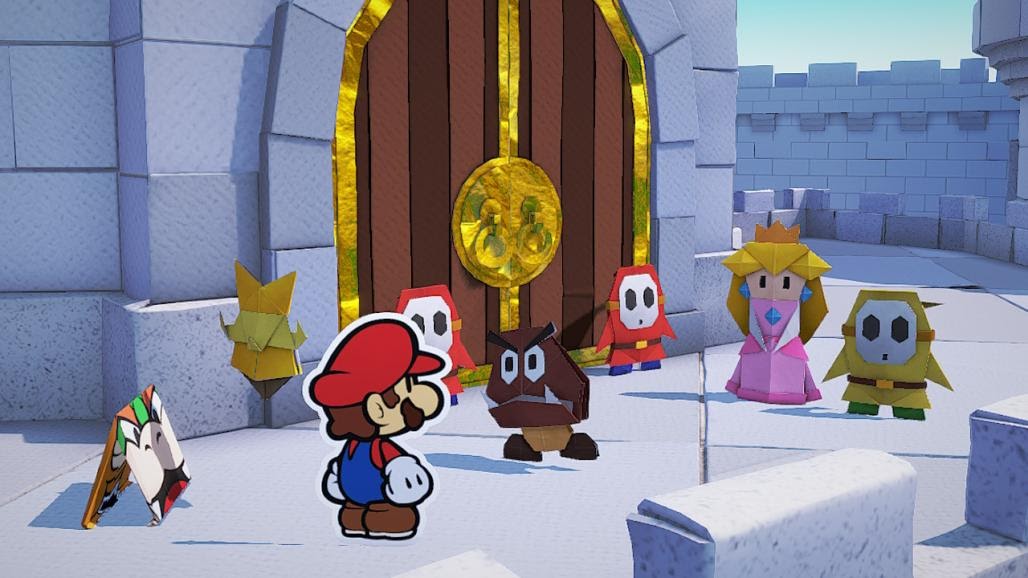 Peach’s story isn’t exactly a revelation, but at least she looks cool in origami.

Much like every other game, THE ORIGAMI KING starts with Mario finding Princess Peach in peril, this time transformed into a brain-washed origami version of herself by Oliver, the self-proclaimed Origami King. After some mechanical setup introducing the concept of Folded Soldiers (transformed versions of Mario’s traditional enemies) and this entry’s twist on the usual turn-based battles (more on those in a second), Mario is paired with Oliver’s sister, Olivia, and sets out to rescue Peach and the denizens of the Mushroom Kingdom, good and bad, from a lifeless “folded” existence.

The former site of Peach’s castle becomes Mario’s hub world, hosting a variety of shops to gather supplies from, with colored ribbons leading off to different parts of the wider world that Mario needs to liberate from Oliver’s influence. From here the first “fold” in ORIGAMI KING’s changes to Mario are visible. Mario’s traditional enemies (“Henchmen” in the parlance of the game) are rendered less as thoughtless villains and more like disgruntled employees in Bowser’s princess-stealing business. Uncomfortable both with their treatment in the workplace and their relationship with each other they begin to ask existential questions about everything SUPER MARIO BROS. Why should a Goomba be considered less than a Shy Guy or Koopa Troopa? Just because they don’t have arms? That hardly seems fair! Just because every Bob-omb’s existence ends in a fiery explosion doesn’t mean they can’t enjoy a full and diverse life beforehand (pun partially intended, much like Goombas they also don’t have hands). 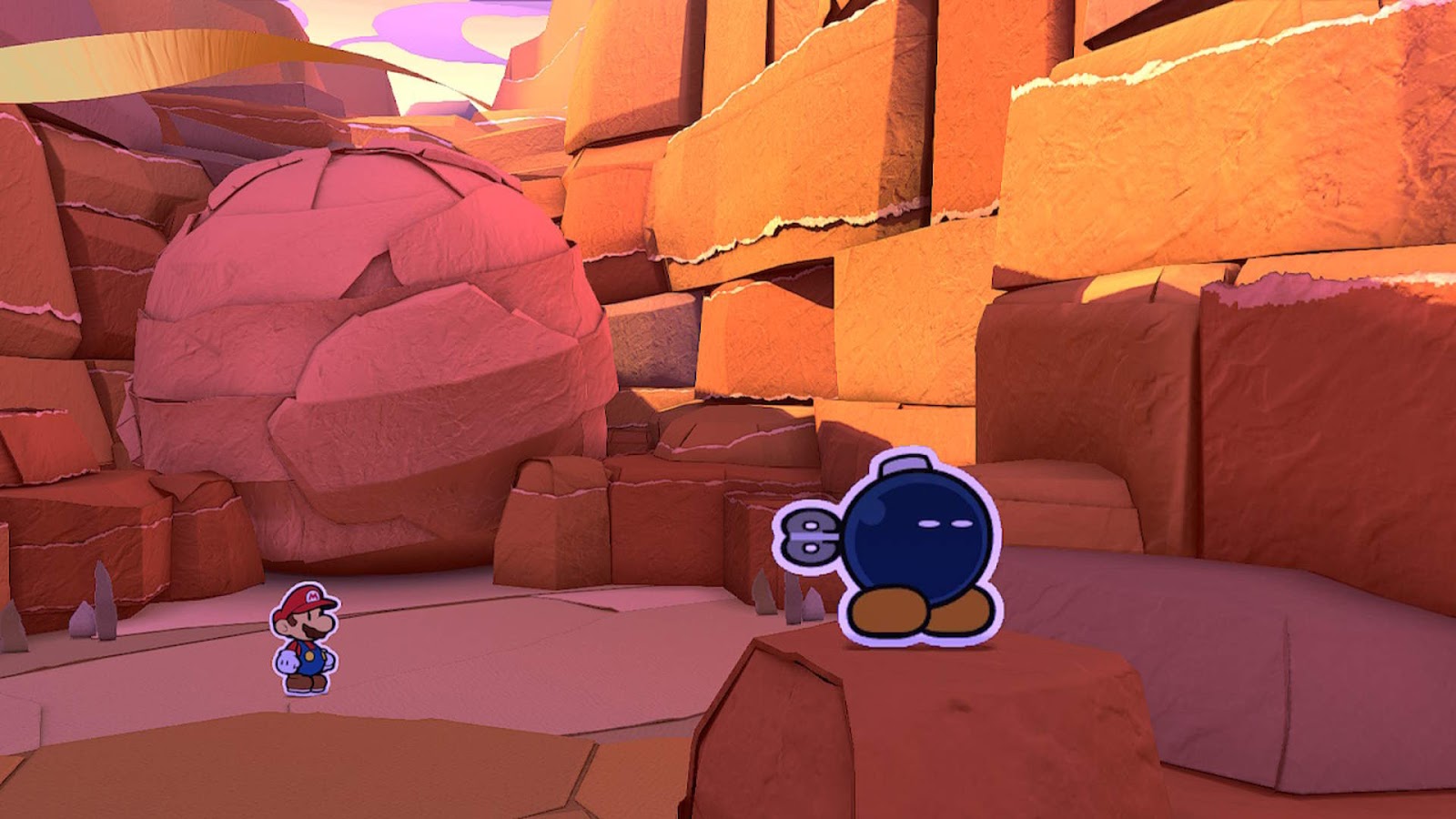 ORIGAMI KING has lots of fun staging these comedic thought experiments, from backstage Goomba bars and canned food parties, to Toads who prefer being folded up into animals instead of their usual job as Peach’s servants. This is a crease in the player’s traditional understanding of how Mario is supposed to work, playing in part to the “theater troupe” logic that original creator Shigeru Miyamoto has expressed as his understanding of the modern Mario titles. The stale parts of the formula (save the princess, save the kingdom) work in a new context as a performative surface layer to what’s actually going on in the Mushroom Kingdom. But narrative experimentation is but half of the PAPER MARIO equation—in the case of this game, an unfortunate arrangement. The folded structure begins to get more complicated.

Like previous entries in the series, ORIGAMI KING starts with turn-based combat, but adds an additional mechanic (in this case a puzzle component) to spice up battles. All battles take place in arenas composed of concentric rings that can rotate clockwise or slide vertically towards or away from the center where Mario and his allies stand. Enemies are distributed across these circles and have to be rotated and slid in line with each other before a clock runs out. Once they’re aligned or the player runs out of time, the turn-based battle begins and the player is given a certain amount of moves to attack the enemies and hopefully wipe them off the board with bonus damage added from correctly “solving” the puzzle. 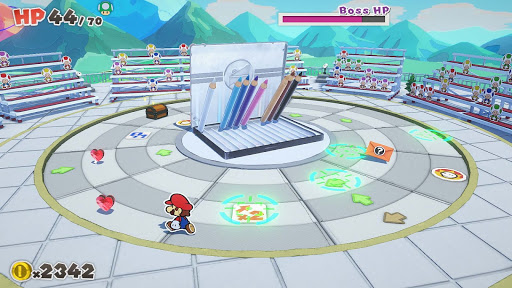 Boss battles mix up the circle puzzles and actually end up being mostly enjoyable.

This is a fun challenge at first: encouraging a sort of visual and spatial understanding of the puzzle that has to be acted on quickly to reap the greatest reward and hopefully make it out of the battles unscathed. Boss battles reverse the arrangement, forcing Mario to rotate and slide the circles to create paths to specific points to attack or use abilities from. These boss battles end up being more engaging than the traditional overworld turned-based battles, but they come far more infrequently, really only showing up at the end of each world’s narrative. While the boss battles’ challenge is uniquely compelling, the rapidly accelerated difficulty of the other battles quickly dissolves any enjoyment they initially offer. The demands of this kind of puzzle will affect each player differently, but if you’ve struggled with this kind of 3D puzzle before, being forced to do them poorly before each battle quickly becomes tedious. The game is generous with its aid: you can “pay” to have Toads solve some of the puzzle for you, offer items and create paths in boss battles so you can see where you’re going, but once you become dependent on them, it only further highlights the futility of the game’s commitment to this format.

Variety in the pre-battle puzzles could make a big difference but an even better solution would be a more gradual ramp up in difficulty and more effective on-boarding to teach the kind of thinking required to do well. Unfortunately, ORIGAMI KING remains rigid in that regard, committed to a good, simple idea that overstays its welcome and never bothers to see if the player is mastering what’s required to play. Here again that observable Nintendo preference for simplicity rears its head. In a traditional 2D Mario game, the first level of each world introduces many, if not all the interactions that will be required to play. World 1-1 had Goombas, blocks to smash, items to collect, and gaps to hop over. Throughout its short run time it iterates on those basic interactions, showing how Mario’s movements can combine with items and the logic of the world to circumvent new obstacles. It’s a classic for that very reason. ORIGAMI KING iterates too, but understanding lateral movement across a plane is just not the same experience as grasping just one complicated piece of a larger battle system in three dimensions. ORIGAMI KING is a complicated piece of work. Adding additional folds to the traditional Mario formula, but not bothering to really explain how to get there and not willing to bend so that all players can have more fun.

By centering origami in this game, the craft that’s always been present in Mario games is made even more obvious: the beautiful character animation, interesting level layouts, and clever, fun writing that pokes fun at the franchise’s history. But it also highlights the artificiality, and ridiculousness, of what you could call the “strange paper” that makes up this series. In ORIGAMI KING, you can see where Mario bends, and where he doesn’t, and that heightened visibility makes the shortcomings of this game that much more disappointing.

A good story and a good sense of humor alone can’t save a Mario game. PAPER MARIO: THE ORIGAMI KING, for all its charm and adventure game sensibility, can’t help but be bogged down by a static and increasingly difficult combat system, some part of a “classic” design commitment to simplicity that the game never escapes. Not unlike the Edo-themed level featured in ORIGAMI KING, the game knows how to put on a good show, finding fun in showing the “meta” backstage areas of its weird world, owning how familiar they might have become after all these years. But that’s only getting half of what’s needed right as rigid, unforgiving combat leaves the game and player tangled up in paper ribbons. A partially folded amusement park, without clear instructions or malleable material to work with.