Check out our Bandcamp Picks for the week of 8/12/20, featuring Silverbacks and Condor Express!

I feel you could make a whole review of Silverbacks’ FAD using only one of those music hot take bots: “FAD is modern slacker rock for people who think Parquet Courts sold out,” “Silverbacks give catchy modern talk-rock a 2000s UK buzz,” “Silverbacks is dismantling the idea of what ’90s slacker music could be.” I mean, you get it, even if all of those don’t quite land with the catch-all clickbait focus you might want. FAD is wordy and goofy-but-somehow-also-serious music. The Irish rockers’ debut is a lot of fun but carries with it an atmosphere of elevated musicianship; not a dime-a-dozen Pavement jag, FAD is musically more a modern evolution from Franz Ferdinand than SLANTED AND ENCHANTED (although you could certainly send highlights “Dunkirk” or “Grinning At The Lid” and make a Malkmus fan’s day). The highlights will strike you as dumb fun and the repeat listens will only highlight just how much deeper the album goes than just joyous shout-along choruses and memorably funny one-liners (although “I stared at arse as the bikes went by on a private beach in Dunkirk / My wife clipped me, she clipped me good, I hurt my soul in manhood” is pretty humorous). There is a fresh, post-punk stomp and boldness to large swaths of the record, highlight “Just In The Band” perhaps the best blend of teeth-gritting pretentious indie rock with live-ready choruses. We’ve been blessed with a number of releases in this genre recently (see: FOOTBALL MONEY from Kiwi jr.) and FAD is a great soundtrack to play in the background of that socially distant beer hang you have next week. You can get it on Bandcamp. [CJ Simonson]

Favorite Tracks: “Pictures Of Nature,” “A Practice In Practice”

Like so many other musicians, when the pandemic shuttered nightlife as we knew it for the foreseeable future, Los Angeles based multi-instrumentalist Jordan Kleinman was forced to cancel a busy year of shows. As a full-time member of the genre-bending rock band Wax Charmer and occasional bassist for vapor-pop heavyweight Negative Gemini, Kleinman’s knack for both production and guitar ripping manifest themselves impressively on his solo EP PICTURES OF NATURE. The release eschews both the electropop and ‘90s sheen of his prior endeavors for an EP of effectively blended CAN! style songwriting and thickly sequenced propulsive rhythms. The record’s title track combines Japandroids-esque big room open chords with babbling drum samples to craft a Stone Roses-y wall of sound that is both contemporary and nostalgic. Additionally, the closing track “A Practice In Patience,” somehow manages to simultaneously hearken both Squarepusher and Thee Oh Sees. The EP overall is a quick, easy, and fun listen that doesn’t take itself too seriously, but inadvertently showcases the chops and ingenuity of a professional touring musician. While Condor Express is a one person project born in Kleinman’s home studio, there is an effectively employed jamminess to the recordings that feels organic and multi-minded. With just three tracks, PICTURES OF NATURE begins to soften the blow of having an entire year of concerts indefinitely postponed. You can find PICTURES OF NATURE here. [Ted Davis]

PAPER MARIO: THE ORIGAMI KING Tries to Fold a Classic

Growing Up Is Figuring Out Scott Pilgrim Is The Villain 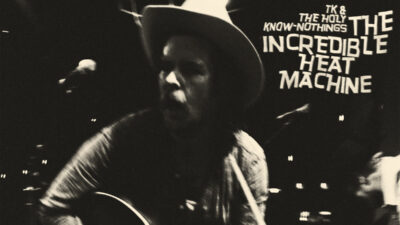