Editor-in-Chief CJ Simonson took a look at the late-summer calendar and proudly exclaimed “Hell yeah, brother,” as he consumed two of the biggest action blockbusters of 2022: one dumped by Disney onto Hulu, and the other over-ceremoniously trotted out as the next big new flavor. If only they were both good! We’ll settle with a 50/50 as CJ discusses PREY and BULLET TRAIN. 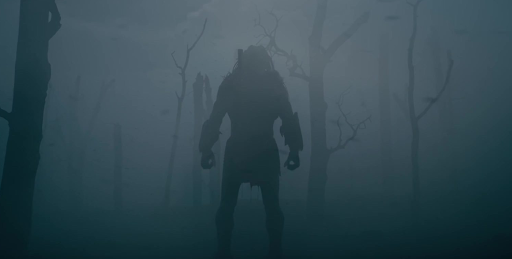 PREY is defined by one particular sequence.

It comes early in the film. Amber Midthunder’s Naru is on the run from a massive grizzly bear, a bloodthirsty king of the forest hellbent on ripping her and her dog apart. Naru, looking to shun both naysayers in her village and fanboys on the internet, is on the hunt. But this bear has other ideas.

Like many of the action sequences in Dan Trachtenberg’s new entry in the PREDATOR franchise, the scene is well constructed; the camera glides around with a soft gracefulness, the action unfolds with long takes and purposeful framing. It’s both a far cry from the original PREDATOR’s meat and potatoes ’80s swagger, and yet an upgrade over nearly every other film the franchise has produced visually—perhaps a bit slick, but confident. As the sequence plays out, with Naru diving under the water into a beaver’s den to avoid certain death, herein comes the introduction we should’ve been waiting for: the Predator. Like a young boy making his action figures fight his sister’s stuffed animals, Trachtenberg gives us glimpses of a brawl between a Predator and a grizzly bear, an idea that’s so buck it’d be impossible to not at least kind of work.

And don’t get me wrong: It works. I mean, it’s a Predator fighting a god damn grizzly bear. I cheered. I whooped. I hollered. It was instantly the coolest thing to come out of a PREDATOR movie since Dutch and Dillon flexed their biceps 35 years ago. But even amidst PREY’s many highs, that sequence was playing out on my television opening weekend. My cheers? My whoops? My hollers? All for no one. The clumsy CGI bear? It was just a reminder of the blasé straight-to-streaming post-production philosophy. The Predator itself? It was omnipresent throughout the entire first act of the film, stymied by filmmakers going out of their way to remind a casual audience that this is, in fact, part of a larger franchise. The possibility that this movie could play in a theater, to uproarious applause as the Predator knives the bear and picks up its lifeless corpse, is such a tease it’s not worth thinking about. By the time I got to cheering half an hour later when the film dropped a rare moment of blatant fanservice by daring to utter “if it bleeds, we can kill it,” my yells were just a hopeless exercise of masturbatory excitement for no one but myself and the nextdoor neighbors. PREY whips. It might be closer to PREDATORS than PREDATOR in terms of quality, but it’s so obviously the second-best movie in this franchise it hurts to know most of us watched it by ourselves, clicking into it on an app that sandwiched it between new episodes of BOB’S BURGERS and THE DROPOUT. One of the year’s best blockbusters had a great back-to-basics script, some brilliant sound design, and a few tremendously thrilling fights, all of which played out on my 10-year-old VIZIO. Both Trachtenberg and this franchise deserved the proper red carpet. And even if every day it gets harder and harder to think it, I think I deserve that red carpet too. 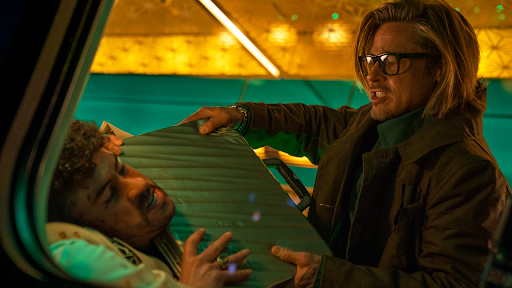 In discussing BULLET TRAIN, you have to start with its director, David Leitch. Though uncredited, Leitch was responsible for co-directing JOHN WICK, a film that’s surprise success has had a larger ripple effect than nearly any other R-rated action blockbuster of the last 15 years—the visual language of the fight sequences, the self-serious tone and lore, the style and lighting choices, not to mention Leitch’s own career and Keanu’s resurgence as an action star, the list goes on.

Leitch’s involvement is important to state upfront, because BULLET TRAIN is a kind of surreal rejection of the John Wick formula top to bottom, a spiritual return to the hyper-violent action comedies of the mid-2000s. You don’t have to go much further than channel surfing to TNT on a Sunday afternoon to find SMOKIN’ ACES, SHOOT ‘EM UP, MR. AND MRS. SMITH, RED, or WANTED in constant rotation, each modern cable fixtures that inform Leitch’s latest. And this isn’t to ignore the patron saint of this kind of filmmaking: Guy Ritchie. LOCK, STOCK, AND TWO SMOKING BARRELS, like JOHN WICK, had a similarly massive ripple effect in Hollywood (see: all the films listed above, but also Ritchie’s own career, from ROCKNROLLA to SHERLOCK HOLMES). Within every exchange of dialogue in BULLET TRAIN, especially the extreme Britishness of Brian Tyree Henry and Aaron Taylor-Johnson, you can hear the voice of someone emulating Ritchie filtered through the dude who directed DEADPOOL 2.

Leitch desperately wants BULLET TRAIN to focus on wise-cracking, flippant, irreverent comedic beats first, then stylized fighting and shooting second, but the decision to emphasize comedy over action just leads to subpar execution all around. It’d be one thing if the jokes and character fixations in BULLET TRAIN worked—Brad Pitt is obsessed with wellness and mental health, Henry won’t stop talking about THOMAS THE TANK ENGINE, there are running gags involving fruit, cameos from Ryan Reynolds and Channing Tatum, etc. Occasionally the movie blindly falls into the right rhythm, as the cast is far too charming to not land a laugh periodically, but frequently the focus on wit and banter leads to an unstoppable sluggishness. Throw in a plot that conflates convolution with mystery, neither of which contextually are particularly compelling, as well as an overlong finale, and you double down against the simplicity of JOHN WICK and the movies that came in its wake. The MISSION: IMPOSSIBLE franchise learned a lot of things once it just wholesale gave up on the plot to emphasize the insane action set pieces, and the set pieces in BULLET TRAIN aren’t good enough across the board to make you ignore the compounding irritability of it all. Would you watch or rewatch BULLET TRAIN if you caught it on TNT midway through? If the answer is likely no, then mediocrity isn’t even within reach.