Before you see it, imagine what you think the new Spider-Man movie is like. Try to imagine the visual style, how the comedy will play out, what character beats it will hit. Let me tell you: the final film, SPIDER-MAN: FAR FROM HOME, is exactly as you imagined. It will shock you how much it is exactly as you imagined. Well—that’s actually not entirely true. What I was not expecting from the latest filmic drought from the Marvel Cinematic Universe was its deplorable politics—this review will feature spoilers from AVENGERS: ENDGAME, so if you’re not in the know about the film that couldn’t beat AVATAR, I’d advise you to stop here. Things might get messy.

Peter Parker—played by the charming Tom Holland—is in Europe for a field trip, attempting to shed the superhero stuff for a while and focus on the quotidian struggles of winning the affection of one Mary Jane—the very funny Zendaya (it’s good to see her smile after her soul-crushing work on HBO’s EUPHORIA). Alas! That’s not to be, as some indiscriminate baddies show up on the scene and Peter must defeat them, with the help of both an ultra-high tech pair of shades gifted to him by the late, great Tony Stark, and an enigmatic new hero who wears a murky fish bowl on his head: Quentin Beck (Jake Gyllenhall, having fun.) Samuel L. Jackson is back as Nick Fury, and I worry for his well-being after his being tasked to deliver lines like “Bitch, please,” and clearly hating every syllable. 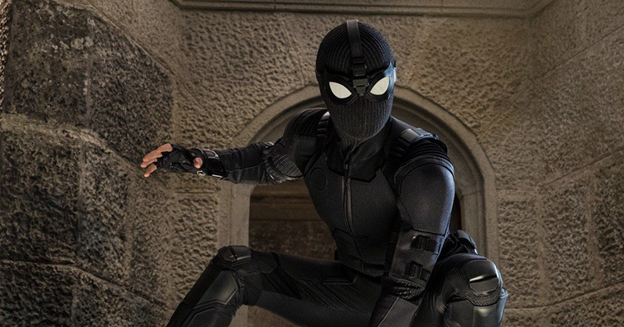 Sam Raimi is rolling in his grave. Seriously though, is he dead? Where is that guy?! Come back, Sam!

The script is littered with Marvel’s signature “almost-jokes” (i.e. Peter’s “spider-sense” being referred to as the “Peter-tingle,” which is supposed to be funny because of the silly syntax). The screenplay quakes with quips like these; sentences that sound like jokes, are timed for comedy, and yet, there’s no actual joke to be found. This is especially true of the bafflingly ill-conceived teachers who chaperone the kids on the school trip—the waste of the hilarious J.B. Smoove is especially egregious. When all else fails, the filmmakers can always fall back on adolescent awkwardness; so incisively portrayed in Sam Raimi’s original trilogy, so gratingly “endearing” in these new films, almost sinister and exploitative, as if these characters’ social clumsiness was intrinsically gut-busting.

You’ve also got to love the anti-direction employed in these movies. The film is directed by one Jon Watts, which, appropriately enough, sounds like a pseudonym. Any thousands of directors could have helmed this feature, and it would’ve looked identical to Watts’ version. To his credit, though, Watts does everything that’s expected of him. He knows to film a close-up, shot-reverse-shot, insert. But if you’re expecting any flair, any style—you’ll be hard-pressed to find it. Even the soundtrack cues seem focus grouped to achieve the optimal “happiness emotion” requested by the Committee who makes these movies. There’s a sequence in here that I imagine will be lauded for its visual ingenuity—it quickly falls apart, however, once you realize there is no significance to be gleaned from it, merely another opportunity for Marvel to flex its ever-bountiful dollar tree.

At least these two got an all-expense paid vacation

The elephant in the room is one Tony Stark—dead at the end of ENDGAME, but his spirit lives on in FAR FROM HOME with the pair of ghastly glasses bestowed unto Peter. The glasses house a network called EDITH, a global surveillance and weapons system which allows Peter to hack into his friends’ phones, and, somewhat less innocuously, summon a fleet of machine gun-toting drones to assassinate whomever he wants at a whim. Tony Stark, the man so venerated by FAR FROM HOME, so cheered by fans and general audiences, is actually an insidious technocrat who embodies the paranoid fervor of the NSA to a tee, but, hey, the man knows how to use the Patriot Act to his advantage, just like Bruce Wayne before him (read: THE DARK KNIGHT). That the movie hoists the war criminal Stark—who has his own goddamn satellite—on a pedestal, even when things with EDITH go south, is genuinely shocking.

MERRY-GO-ROUNDTABLE Episode 29: The Decade of the Digital Self