Every so often a movie comes about that challenges the notion of cinema itself. Consider Hitchcock’s PSYCHO or Pasolini’s 120 DAYS OF SODOM, even Tarantino’s PULP FICTION. You can now add to that list of groundbreaking films Jon Favreu’s 2019 remake of THE LION KING. Favreau’s is a film committed to both invoking nostalgia in older viewers and sowing its seeds in the younger crowd, children who’ve never been exposed to the 1994 original. This is impossible for one reason: nostalgia is a yearning for something that never existed in the first place, therefore any attempt to lead to its inception or intentionally recall it will fail. If the original film at least acknowledged this fact by virtue of its expressive, clearly fantasmatic hand-drawn animation, then the 2019 film and its precise photo-realism—its facsimile of reality and attempt to locate something tactile, the way a sensory experience can take you back to your childhood—strays even further from the emotion it attempts to conjure.

The original movie could never be transported into the Real, because it was fundamentally opposed to it, and instead reveled in fantasy, which is fairly appropriate for a children’s film (this is, however, its own can of worms that Kate Brogden fantastically opened over a month ago). The 2019 LION KING, however, is founded on the conception that if the film can truly occupy the realm of the Real, through its National Geographic exactitude, then it will be more impactful and more effective in subjecting children to interpellation. That is, the film’s ideology has been rendered at once more tangible, and digestible, and the movie’s application has surpassed that as more than just a product for consumption; it has become an umbilical cord tying the unsuspecting child to the Imaginary—the child who might see in the film that reality is, in fact, unattainable. The faces of these lions and meerkats and warthogs almost look real, but at the same time they speak and sing and consistently rupture the reality the film works so hard to establish. 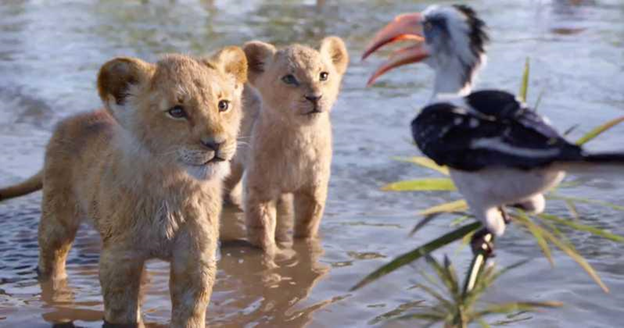 If the cinema screen is a mirror, as advanced by the psychoanalytic Screen Theory conceived in the early 1970s, then THE LION KING reflects back to the child, through its use of photo-realism, that the traumatic Real—that is, the trauma of losing a father and being blamed for it—can be resolved through silliness, fart gags, and musical numbers. It is telling that the “Hakuna Matata” proverb is rendered almost viable by the film, in contrast to its clear parodic purpose in the original film. “No worries.” “Life is meaningless,” the meerkat literally asserts. Accept the virtual Disney monopoly, they seem to be saying. Resistance is futile.

It is interesting to note the development of the commodity—the 2019 LION KING and the original both exist, on some level, to push plush animals—from a vivid, fantasmatic rendering to a lifeless and dull one. On the one hand, the Real, in the time between 1994 and 2019, has become wholly inappropriate and unacceptable (I need not delve into the role social media and the internet has played in disturbing the sanctity of quotidian boredom, which is in and of itself valuable). We can come to a Marxist understanding of the dilemma THE LION KING presents— here is Chris Rasmussen writing about Marxist aesthetics: “Real artists… should not strive for a false beauty, but work diligently to disharmonize the faculties and awaken the people to their acute pain.” The false beauty of the film resides in the immaculate CG, from the dips and dives and curdling geysers of elephant graveyards to the involuntary flickering of lion ears and the wavering of stray hairs in the wind. One cannot be “disharmonized” by THE LION KING since its very ideology rests on the idea that everything exists in a “delicate balance” and one must not disrupt the harmony and balance of the “circle of life.” 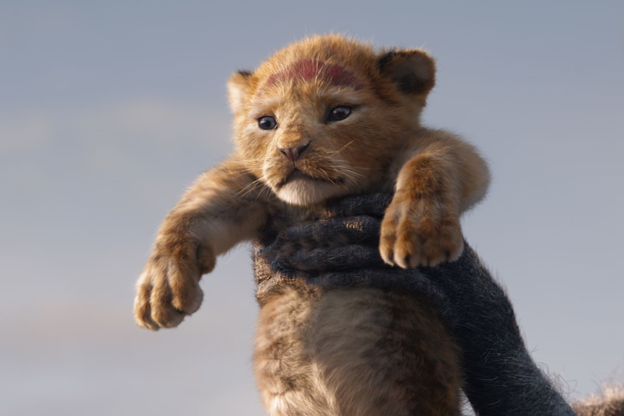 The film embodies R.D. Laing’s concept of “ontological insecurity” more vividly than perhaps any other recent film, even those which deal explicitly with issues of ontic erasure or annihilation anxiety. The film’s dearth of reasons to exist becomes a reason, the only reason for it to exist—in that way, the film is more human than many of its contemporaries. Surely, to watch the 2019 LION KING is to visit a parent who’s just had a stroke—and who enthusiastically starts groping you at the dining table, apparently confusing you for a former lover. THE LION KING confounds the mind even as it assassinates cinematic concepts, like the close-up and the push-in; there is no information to be found in these vacant faces, so why approach them?

Mufasa sits with his son at the precipice of Pride Rock, overlooking the vast Serengeti. “Look, Simba. Everything the light touches is our kingdom.” It’s easy to imagine the light stretching on, and on, speeding past the deathless savanna and the peneplains and petrified wildebeest until the horizon has indeed become unlimited, and one can see the very edge of the world brimming over, spilling into itself and smearing into flaming, screaming phosphenes—technical difficulties. Simba and Mufasa stand by while a PA adjusts their lapel mics, and a grip sidles the green screen facing them just a tad to the right.

THE SINKING CITY Is the Eldritch Experience I Hate to Love