As we circle in on almost a year in quarantine, we’re rounding the corner for an infamous, albeit Hallmark, holiday. Valentine’s Day has sat its garish, pink-and-red ass upon us and we can only bow to its whims. Whether you have a partner you live with and don’t resent by this point, bravely doing LDR, or are single and unable to mingle, we at MGRM want to provide for you. We’re giving you some films to distract you from chafing your nethers, but will still keep you in the holiday “mood.” We are brothers in licentiousness, however, all our contributors wrote in such excruciating horny proclivity that they pleaded to stay anonymous. In all honesty, after reading these, we probably would’ve labeled them anonymously anyway. 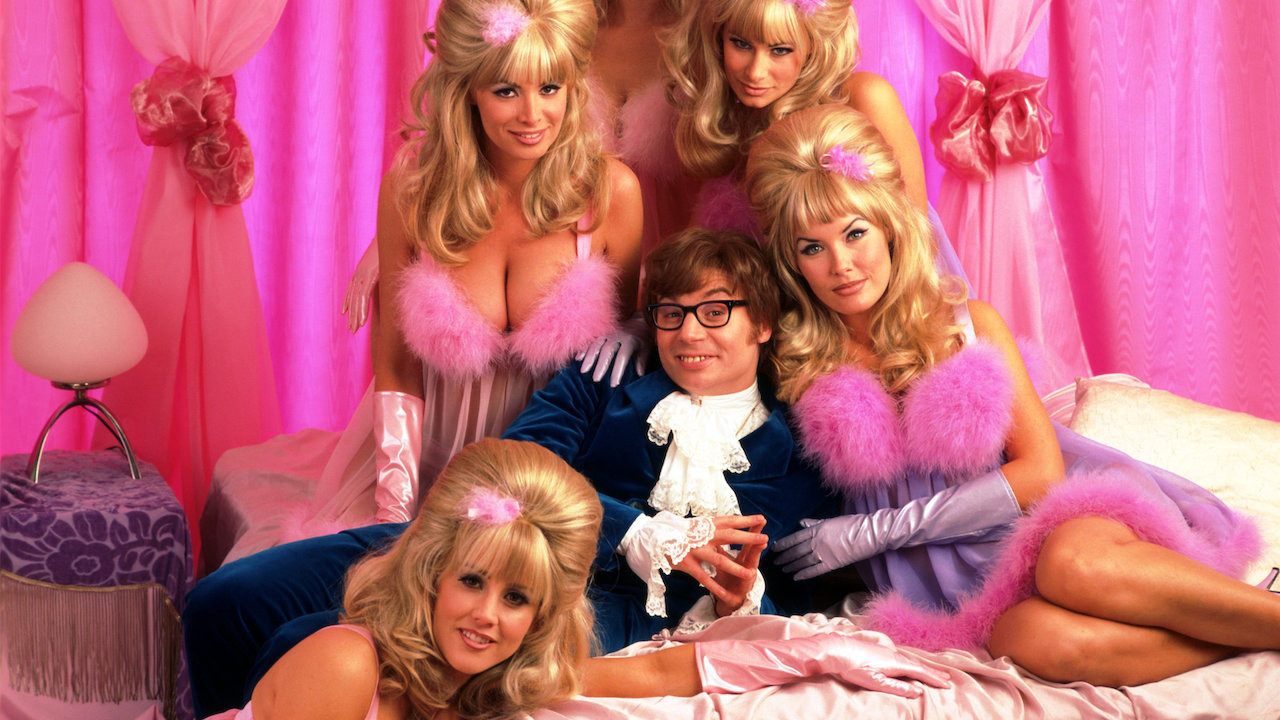 If not for the anonymity with which this passage of writing is being published, then I wouldn’t, under any circumstances, reveal this: AUSTIN POWERS: INTERNATIONAL MAN OF MYSTERY made my prostate throb as a young boy. I must have been seven or so when my friend pulled it from his dad’s DVD collection. The film and its subsequent sequels are a satire on the James Bond franchise, led by the titular Austin Powers, a person whose lust for making everything and anything sexual is more or less the crux of the film’s humor, all of which went over my head as a kid, which was fine, because the film is altruistic in its horniness, catering it to all age groups with its bevy of sexual imagery. There was one scene, however that was, for a young me, a sexual explosion of life-altering measures. The scene has Powers pitted against a character named Alotta Fagina [sic]. I knew what vaginas were and honestly wasn’t interested in them, but hearing Fabiano Udenia say “Fagina” made me reconsider my position. I crawled to the end of my friend’s couch nearest the TV. In the scene Powers and Fagina engage in a playfully sexual back and forth, and Fagina steps into a jacuzzi naked. She proceeds to float to the back of the jacuzzi, wherein her breasts float up towards the surface of the water, just barely floating above. Normally I would have looked back to my friends for confirmation of “Should we be watching this?” but I was frozen. My body tightened up, alarm signals and buzzers began going off. All points of sensitivity were at full attention.

MARRIED TO THE MUFF 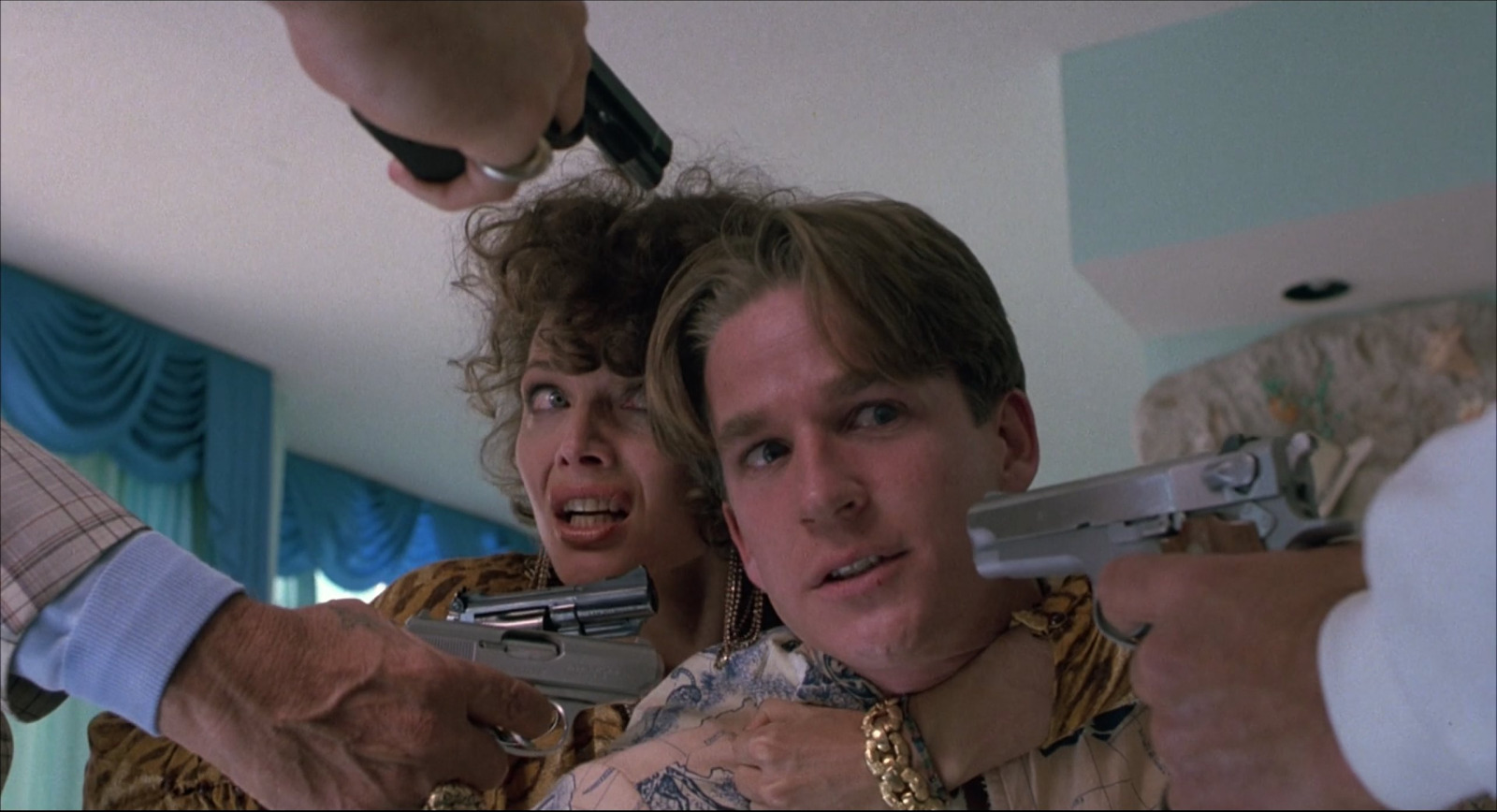 Michelle Pfeiffer and Matthew Modine are hot. Especially in the ‘80s and ESPECIALLY decked out in ridiculous, almost cartoon-esque clothing befitting a mob-wife-turned-hairdresser and a government spook. But I’m going to set that aside to speak to a specific scene from the movie they star in together, MARRIED TO THE MOB. The setting is loud, bright, and boozed-filled. Angela (Pfeiffer) and Mike (Modine), after multiple meet-cutes, are finally on a first date at a Brazilian restaurant. It’s the rhythm and the sound, the fact that both actors play convincingly goofy drunks, and the dancing, oh the dancing, that really turns up the heat here. But more than that, it’s the very romantic idea of discovering someplace new with someone new. Having fun with strangers as a stranger. Letting loose and touching people, in a socially acceptable way! It’s the kind of moment that you realize is great, just as the roller coaster comes to a stop and the last song ends. But when it’s happening, it’s the high of a lifetime, a natural non-consumable aphrodisiac. Just you, Michelle, and Matthew embracing as the crowd applauds and you realize how drunk you are. Also, it’s intercut with a mob shootout, which maybe gets you going in another way. No wrong ways to get steamy in a Jonathan Demme movie. Well, several wrong ways in SILENCE OF THE LAMBS—but tonight, the vibe is right. Cue the night cap! 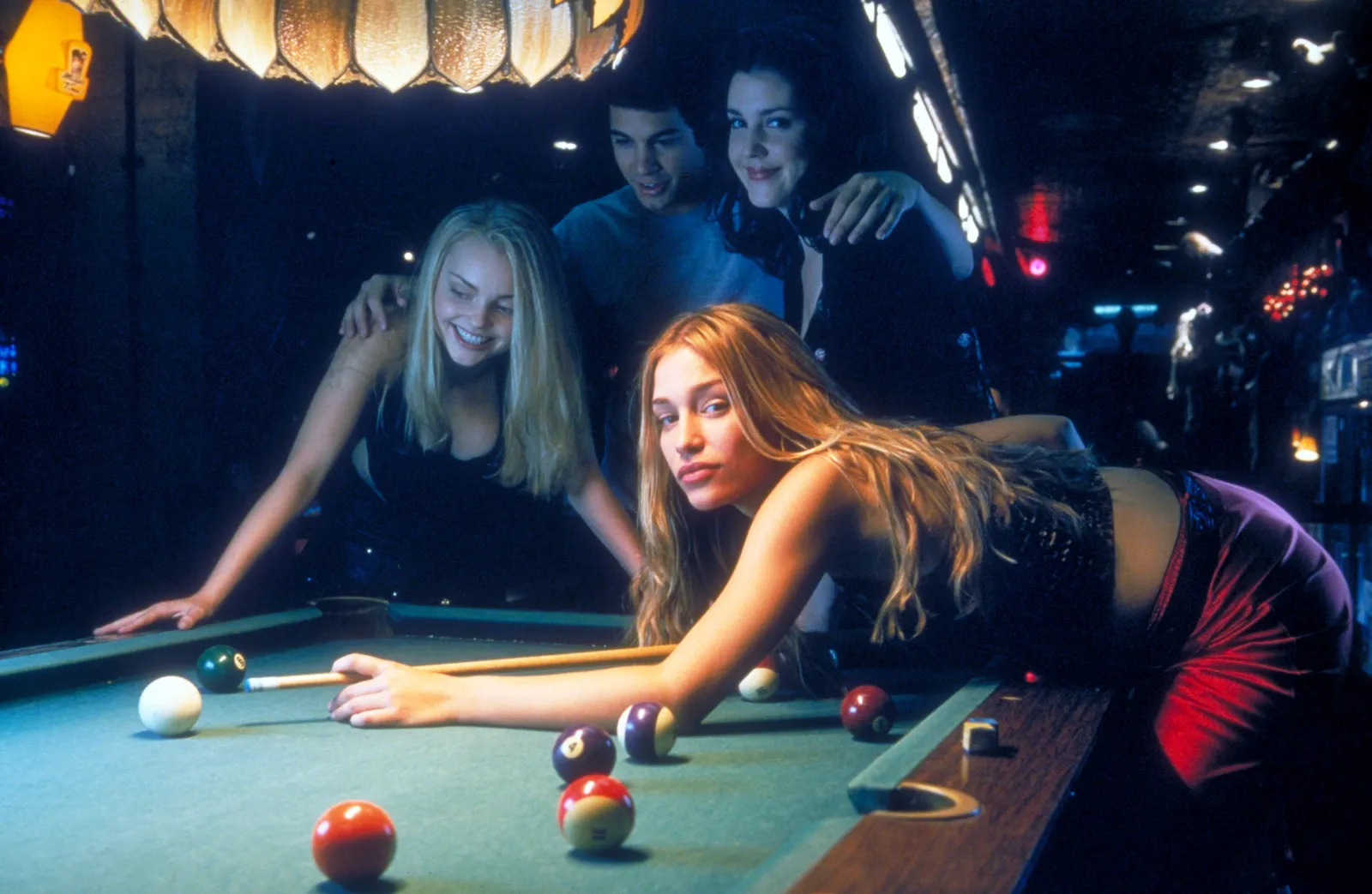 The hysterical thing about COYOTE UGLY is that it’s seminality stems completely from its antithesis: we only care about the hot women. The film wanted WILD THINGS’ reach, but with a surface level, (white) feminist moral. No one cares about the supernaturally boring A-plot of a New Jersey ingenue trying to make it as a songwriter in the big city, especially at 12 years old. It was abundantly clear the whole reason to stay is low-waist jeans, cowboy hats, and queerbait-y dance sequences. These women are so hot, it’s “Criminal” by Fiona Apple. When their asses aren’t in tight leather or tits held by shreds of a tank top, they’re pouring ice cold buckets of water on themselves and showing off hard nipples. The film is the 2000s’ equivalent of “finding your dad’s Playboy” and all you can do is remember to unclench your jaw. COYOTE UGLY also literally, tonally, and sartorially bridged the gap between the ‘90s and Y2K. It gave us a little grit, a sublime soundtrack, and an Aussie heartthrob. Furthermore, Adam Garcia peeling off Piper Perabo’s sheer, lavender tank top and matching underwear to reveal her perfect tits is irretrievable from the mind once seen. Not to mention, COYOTE UGLY gives the most early aughts thing imaginable: a pube line from Mr. Garica himself. The film as a whole is edging you for one-hour-and-forty-minutes with teasing dance numbers and a breadcrumb trail of nudity. As the credits roll, you may not have creamed your jeans, but you’ll wish that the head you were getting wasn’t “Can’t Fight the Moonlight” unstuck.

*editor who wrote these titles gets shot and killed* 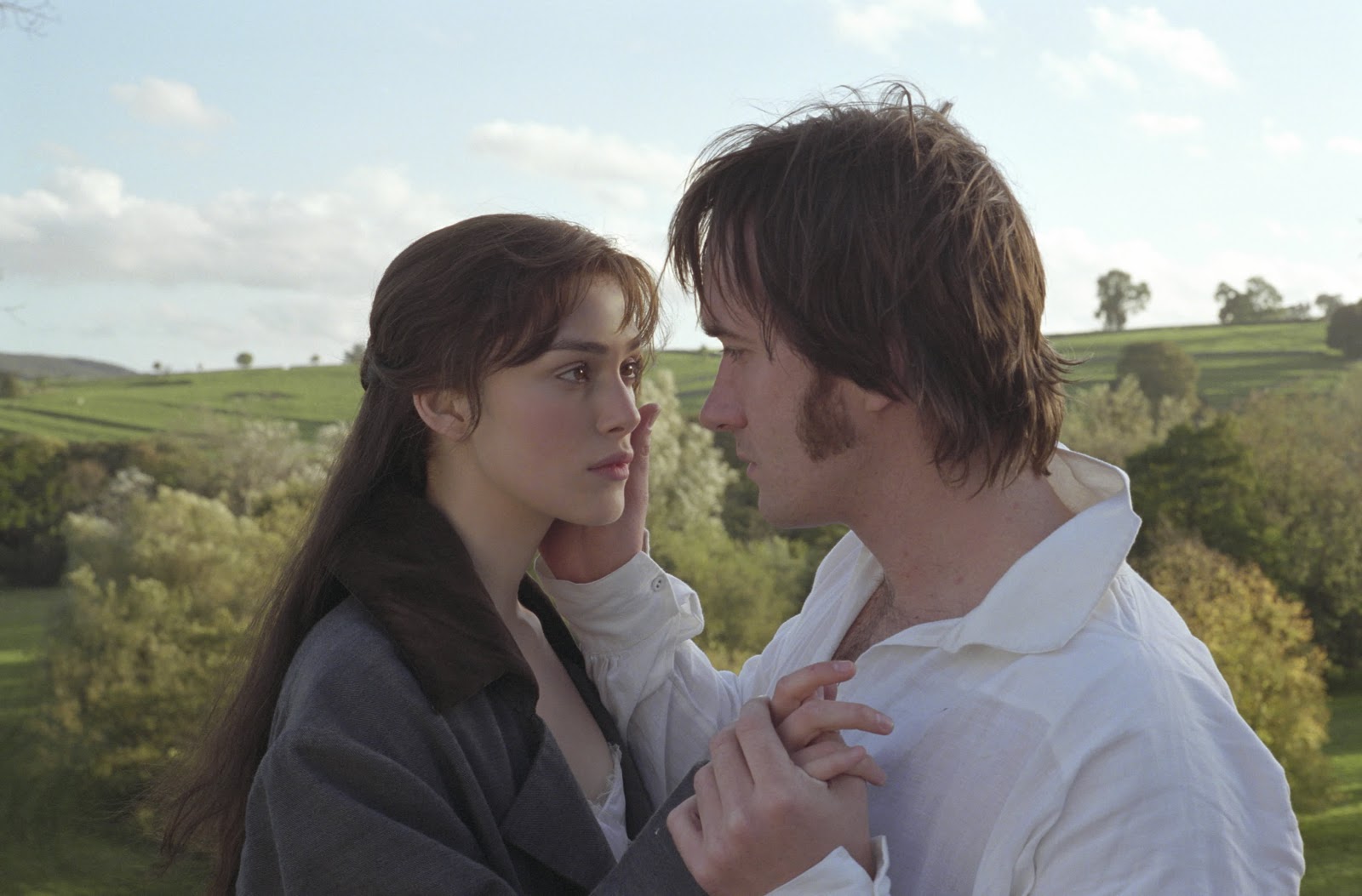 I have this screenshot saved of a Snapchat my friend sent me during one of her hundreds of rewatches of Joe Wright’s PRIDE AND PREJUDICE, upon which she writes, “Why does this G-rated movie from 2005 make me cream my jeans?” This was something I’d never considered, even in all 100 of my personal rewatches. Why… Is this movie so H-word? For me, there is nothing more titillating than a crush, though having a crush is incredibly difficult to capture on screen. This is a major flaw in most mid romantic comedies: how am I supposed to believe these people should end up together when they haven’t even spent a second pining? Show me the yearning, show me the longing! Like, yes, sex is cool, but have you ever rejected a man (who you thought hated you) while hiding from a rain storm in a literal temple? To me, one of the best on-screen representations of a crush manifests in the scene in which Elizabeth (Keira Knightley, sapphic savior of the ‘00s) gets dragged on a tour of Mr. Darcy’s (Matthew McFayden, if you think SUCCESSION ruined P&P you’re a coward) estate, and she’s soooo embarrassed because the last thing she said to him was basically “fuck off,” but since then… She’s found herself softening to Mr. Darcy. And so she’s pacing the marble floors, gazing at all these pieces that he chose, sensing his presence in the room, despite his absence, and suddenly there he is… Yet isn’t. She locks eyes with a bust of his likeness, staring at it with such focus, such rapture, like she’s seeing him for the first time. Moments later, she runs into the real Mr. Darcy, who is obviously still obsessed with her, and he asks her if he can give her a ride back to her hotel. She says, “No, I’m quite fond of walking,” to which he replies, “Yes. Yes I know.” There’s this heavy silence that follows because… Holy shit… Did she just submit to the mortifying ordeal of being known? Full-body goosebumps.

Despite how engrossing it is to watch the two leads actually flirt, nothing in the film could ever amount to maybe the sexiest moment ever committed to celluloid. Despite having been a bit rude to Elizabeth, Mr. Darcy bids her farewell and she looks down to discover his hand engulfing hers, assisting her into her family’s carriage. She looks after him in shock, watching as he strides away and, dripping with sexual tension, flexes the hand he took hers in. How can one man’s hand so succinctly capture 208 years of desperate longing? What does Joe Wright know that we don’t? Actually, I think he’s privy to maybe the most crucial secret to telling a good love story: there is nothing sexier than when two people who are obsessed with each other are hardly allowed to touch each other. God. I can’t wait to be 80 years old, proudly still creaming my jeans for PRIDE AND PREJUDICE. Plus, it is THE pandy vibe, perfect to watch over Zoom with your crush and fantasize about lightly touching their hand.