When in Rome, do as the Romans do. When in Preston, Idaho, do as Napoleon Dynamite would do. My family’s road trip to see the great outdoors took a twist once we realized we were mere hours away from the hometown of Jared Hess and his 2004 cult classic, NAPOLEON DYNAMITE. We realized that visiting the town of Preston is not just a detour, it’s a spiritual journey. A pilgrimage, if you will.

Yes, Preston still has a running video store. And it just happens to be the cultural hub for all things Napoleon. Adventure Video has its own section of Napoleon Dynamite merch, including “Vote for Pedro” T-shirts and home-woven handicrafts à la Deb. The woman who runs Adventure Video has a unique connection to the film herself. Her son played the sound technician during the school assembly—it’s his hand that slides the volume levels up on Jamiroquai’s “Canned Heat,” leading to Napoleon’s legendary dance scene. In fact, many bit parts were played by locals who still live in town. Perhaps the neatest curio the store has to offer is an exclusive “Napoleon Dynamite’s Sweet Preston Tour Guide,” complete with map, on sale for $1. Other stops on the main street include the Cuttin’ Curral (Napoleon’s excuse for not signing up for Glamour Shots by Deb) and Desert Industries Thrift Store (where Napoleon unearths a copy of D-Qwon’s Dance Grooves). 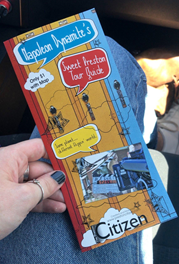 The actual Big J Diner used for filming is located right outside of Idaho in Richmond, Utah. For the sake of proximity, we stopped by the Preston location. Both locations have since been remodeled, however, so the interior doesn’t share much resemblance. That being said, there are still a few things you must do at Big J Diner. You must order onion rings and/or tots—onion rings being what’s eaten during the diner scene, tots being a NAPOLEON DYNAMITE staple forever and always. And you must order a Fresh Raspberry Shake, if available. Not just a raspberry shake (which is also on the menu, don’t be fooled), a FRESH Raspberry Shake. While it can’t be 100% confirmed, I’m convinced that this is what Kip is drinking when he tells Uncle Rico that things between him and Lafawnduh are “getting pretty serious.” Not only that, but it’s hands down the most delicious shake I’ve had in my 21 years of living. The girl working at the counter was happy to give us tips and directions—she herself moved to the town because she enjoyed NAPOLEON DYNAMITE. Her parents had already moved there, and once she watched it, she decided it seemed like a nice place to live. She told us to drive down the road and make two rights, and look out for a red brick house that overlooks the field where Uncle Rico filmed his football videos.

After lunch, we began navigating our way to the Lamont Reservoir (the pastoral setting of Kip and Lafawnduh’s wedding) when we noticed a red brick house on our left. Fitting the description from the girl at Big J, we pulled over. There was a sign reading, “‘Heck Yeah’ Napoleon Dynamite’s House!” Somehow, we had stumbled upon the gem of Preston without even realizing it. We had reached the promised land, arrived at the mythical oasis in the middle of the desert. Tears were shed. The house is virtually identical to how it was portrayed in the movie, give or take a few minor adjustments. The stairs have been repainted, a few plants have been removed, but that’s basically it. There’s also a makeshift guestbook and a donation jar labeled “Tina’s Dinner Fund” (Tina, they say, passed away six months ago. Sorry you had to hear it from me). For the current family, the house has basically become public property—a perpetual museum exhibit where people feel comfortable sitting on their doorstep to stare off into the mountains where Uncle Rico bet he could throw a football over. The guestbook already had 10 families’ names on it from that week alone—people from Washington, New York, Hawaii. NAPOLEON DYNAMITE may fall under the label of cult classic, but boy, it’s a widespread cult at that. 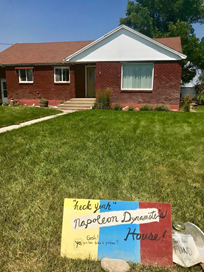 Gosh! Yes you can take a picture!!

We hadn’t even crossed the road when someone from the neighboring porch called out, “Here, lemme take a picture of you guys!” It became instantly clear that Prestonites are used to the hype, even 14 years after the movie’s release. Despite a warning in the tour guide that “some folks bristle a bit when you mention you came here because you love Napoleon,” all the people we encountered were polite and encouraging. Like Napoleon’s house, Pedro’s humble abode hasn’t changed a bit. What’s more important than Pedro’s actual house is the the sidewalk in front of Pedro’s house, where he got like three feet of air off his DIY jump. 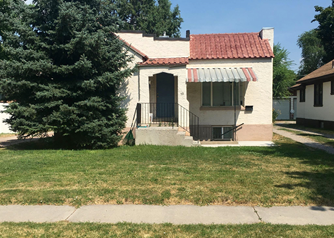 You got like 3 feet of air that time… Can I try it really quick?

The infamous high school with the multi-colored lockers closes for the summer (as in the season, Summer Wheatley had nothing to do with this) but there are still a few exterior locations that are the setting for some iconic scenes. The stairs leading up to the school are where Napoleon shows Deb his liger drawing before running away to Uncle Rico’s van. The bike rack just to the right is where Napoleon checks out Pedro’s sweet bike. It’s also where Pedro and Napoleon campaign for class president by handing out Deb’s keychains, and where Pedro’s cousins roll up to give a solemn warning to a bully trying to steal another student’s bike.

Pop n’ Pin Lanes was under construction, but following the trend of people in Preston being friendly, we asked someone out front (having a barbecue) if there was any way we could take a look inside. He said he would, under one condition— that we signed our names on the inside wall before we left. There were already a handful of signatures on it, along with the large words “Uncle Rico Was Here” painted across. The guy who let us in was one of the new co-owners of the alley, but the original owner who was in charge during filming in 2003 was there as well. The new owner told us that he was originally planning on painting over the interior murals, which appear outdated now, until he realized they were prominently featured in Kip and Uncle Rico’s bowling scene. While the lanes themselves were closed, we did get to hold Uncle Rico’s bowling ball. Yesssss! 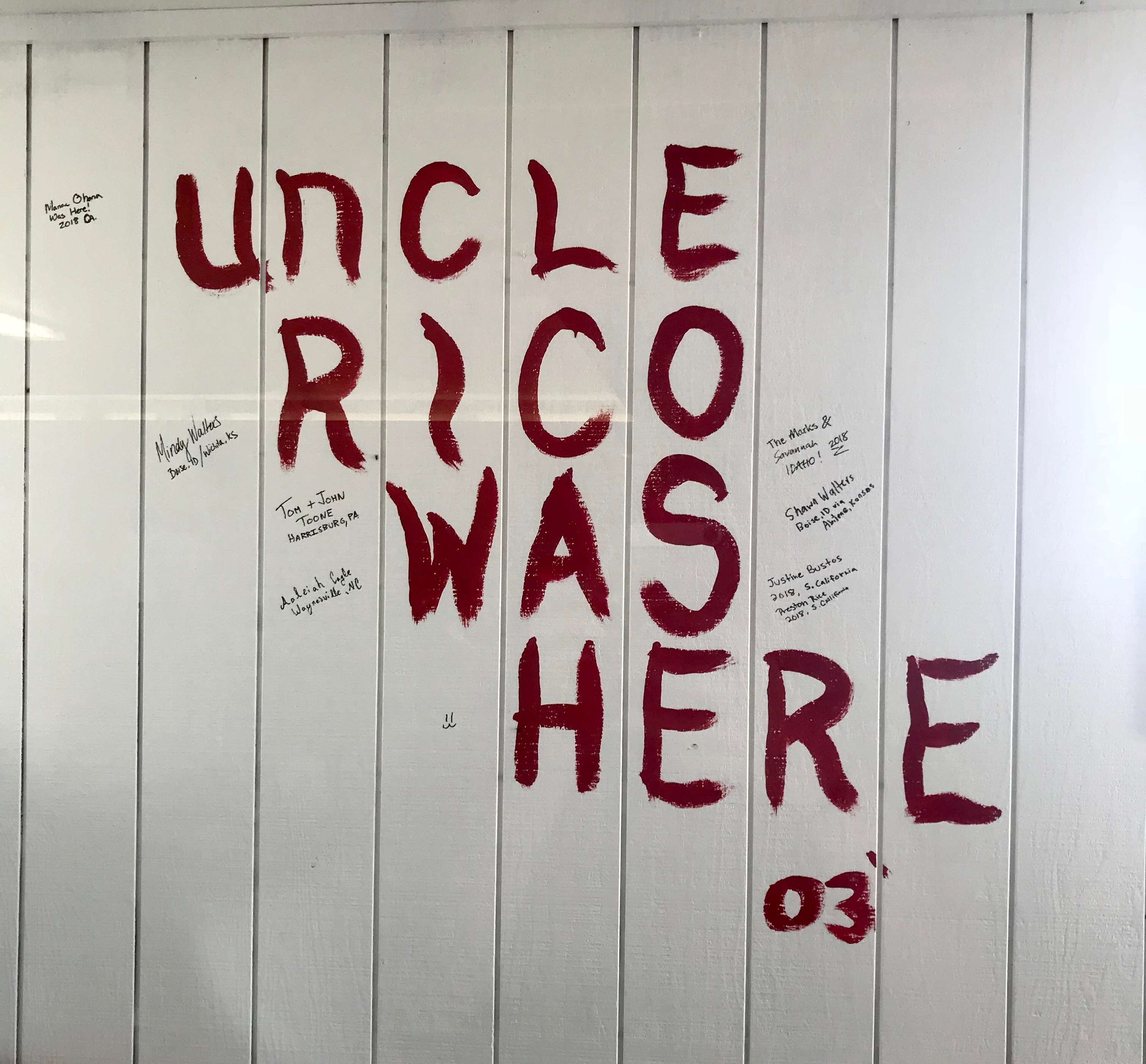 Kip, I reckon you know a lot about cyberspace?

The tetherball court from the final scene is probably the most instantly recognizable site, and the one most frequented by tourists. We ran into two separate groups paying a visit at the same time we were. One was a family from Los Angeles headed towards Yellowstone, who had been determined on making the trip. “Our kids are obsessed with it,” the mom said, pointing to her two sons who by the looks of it were probably infants when the film was released. “It’s a big part of our household.” It instantly reminded me of my childhood dinners in front of the TV watching NAPOLEON DYNAMITE with my family, showing NAPOLEON DYNAMITE to literally anyone who would watch, dressing up as Deb for 3rd grade Halloween. A gifted portrait of Napoleon and Kip we had on our shelf mixed in with our family photos, garnering looks of confusion from guests. What is it about this movie that had the singular power to transfix us, bring all of us together? I digress. The tetherball pole still remains, but the ball does not. So anyone looking to recreate the famous “You wanna play me?” scene should note to bring their own tetherball. But other than that, everything is untouched. The blacktop is still surrounded by a lush, green field, and when the sun started to set and the sprinklers turned on, it was downright cinematic. To truly get the most out of this emotional experience, listen to When In Rome’s “The Promise” while standing on the tetherball court. You will feel an unparalleled mix of nostalgia and euphoria, the feeling of a long, lost dream realized. Don’t say I didn’t warn you.

You know in the end, I’ll always be there.

A smaller but still important stop to hit along the way is Benson Park, the site of Kip and Lafawnduh’s first in-person date. That day in Preston, Benson Park was filled with tents, bounce houses, and barbecues for their annual summer cookout. Just past that, however, stands the bench where Kip and Lafawnduh play footsie while flirtatiously smirking at each other. Another short and sweet stop, a mile or so down the road from Napoleon’s house is where Napoleon’s Happy Hands crush Trisha lived. About 10 minutes off-road in the neighboring town of Franklin, Idaho, you can see Ritewood Egg Farm, where Napoleon makes a dollar an hour wrangling chickens, drinking egg yolks, and inquiring about the size of said chickens’ talons.

A self-guided tour of Preston can easily be completed in a day. It’s probably one of the only singular small towns in America to give birth to one of the early 2000s’ biggest cultural phenomenons, a testament of Hess’ ability to take nothing but his own personal experience and weave it into gold. So this past summer, my family was not baptized by a bath in Lourdes, but by pure, unadulterated American pop culture. The only holy relic I left with was a boondoggle keychain that now hangs on my keyring. So for those of you who muttered “Luckyyyyy!” under your breath at some point while reading this, consider going the extra mile(s) to visit Preston. You’re guaranteed to have nothing short of a killer time. 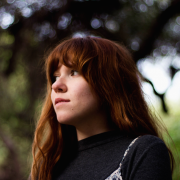 IF BEALE STREET COULD TALK Brings James Baldwin to Life