Having never seen the original ALADDIN, a film which I understand is quite beloved, I walked into Guy Ritchie’s 2019 ALADDIN free from trepidation over its potential bungling—though I was certainly amongst those viewing the initial trailer who found Will Smith’s cerulean genie to be the stuff of nightmares. The film itself will please the youngsters able to gruel the 128-minute runtime; entertainment value quickly drops off with advancing age, however, and I’m not sure whether long-time Disney acolytes will appreciate some of the ghastly choices on display here. Still, despite the abominable first third, ALADDIN is above-average babysitting material and benevolent enough to keep most parents from permanently resenting their children for them having dragged the folks to the theater in the first place.

You know the story: street-urchin Aladdin (Mena Massoud) stumbles upon a magic lamp which summons a genie. Genie gives Aladdin three wishes, Aladdin struggles to impress beautiful princess Jasmine (Naomi Scott), evil Jafar (Marwan Kenzari) seeks genie’s power for himself. Director Ritchie, known for such gritty crime films as LOCK, STOCK, AND TWO SMOKING BARRELS and SNATCH, is the natural pick to direct the children’s musical about a magic genie; unfortunately, Ritchie whiffs the first act so badly it very nearly spells certain doom for the rest of the picture. Ritchie demonstrates an inability to grasp proper character introductions—Aladdin’s entrance, woefully unceremonious and underplayed, is inexcusable, but even worse is Ritchie’s attempt to stage musical numbers, with one number in particular evoking potent community theater energy. Costume design is inexplicably amateurish and Ritchie floods this section of the movie with untold amounts of glimmering CG detritus to supplant actual visual storytelling. 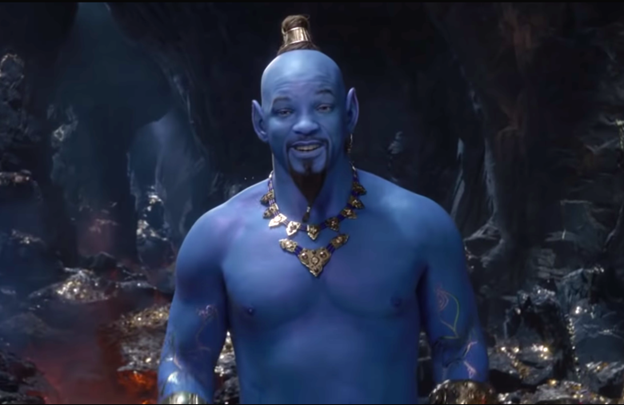 Things get much better once Smith’s Genie appears, and from then on, Ritchie seems to find his footing, his musical numbers still mediocre but no longer offensive. Smith is an innately charming performer, and he works well here, a supremely assured turn that also leaves room for dashes of awkwardness and pathos. Chemistry between Smith and Massoud is probably the most surprising part of the production, with the pair establishing a compelling father/son dynamic that helps prop up the film in its cinematic dire straits. Unfortunately, Massoud by himself is a dreadfully boring actor—not to be outdone as worst performance in the film, however, Marwan Kenzari’s absolutely appalling embodiment of Jafar reigns supreme. Kenzari’s may be the worst Disney villain performance of all time, the actor unable to conjure up a morsel of menace as a power-hungry vizier, in scenes that should be scary, or at least unsettling—it’s an absolute flatline of a performance, and just as frequently embarrassing is Ritchie’s failure to spot its incompetence.

It’s not all bad, though. Naomi Scott is wonderfully expressive as Jasmine, and the film’s scene-stealer may be her handmaid, played by Nasim Pedrad, who brings a bizarre and genuinely novel comic energy to the proceedings (her line reads are seriously something to cherish). Ritchie strives to make Jasmine more of an autonomous character than in the original film (judging from the original’s synopsis) and paints himself into an ideological corner by so doing. For example, in a moment of supreme Wokeness, the director grants Jasmine a solo performance entitled “Speechless,” in which she belts out vaguely empowering rhetoric prior to the film’s climactic moments. Ultimately, however, the song—and Jasmine’s moment of agency—is rendered useless by the plot. It is, of course, not unusual for a corporation to allude to social justice movements without engaging with that movement’s actual text, but it’s still shocking whenever it does crop up.

Treasure the moments like this where Will Smith isn’t blue.

I question also the film’s conclusion, which differs from the original in that Jasmine is made Sultan. I don’t think anyone, woman or otherwise, inhabiting the role of Sultan, a monarch with ultimate authority and unfettered executive power, is exactly something to cheer about, but it seems as if the film’s writers equate empowerment with being in positions of power—a slippery rhetorical slope that suggests autonomy is only possible for privileged women. But I think Disney is hoping that the endless closeups of a CG monkey’s face and Will Smith’s blue uncanny valley-ness will help distract you from that unpleasant implication.