Amidst the flurry of summer movie fare cannibalizing each other for a shot at a mid-range box office success, the films relegated to VOD are head-to-toe enveloped in the gore. These films live or die by word-of-mouth, and BODY AT BRIGHTON ROCK, the feature directorial debut of Roxanne Benjamin, a producer of the found-footage V/H/S franchise, is one that deserves a moment of your attention. There is a catch, though. BODY AT BRIGHTON ROCK is not very good. Stick with me.

In 2019 America, few are granted the liberty to get picky about their occupation, a dilemma that has undoubtedly led a young reluctant ranger, Wendy (Karina Fontes carrying the film on her back in her first starring feature role), to pick up a pack and earn a paycheck picking up trash along hiking trails. When she switches packs with a fellow ranger to post signage along a more strenuous trail, she almost instantly loses her map and finds herself stranded on an isolated ridge with no phone battery and a new friend: a dead body. Benjamin has good taste in her arsenal, utilizing a potboiler premise to string you along a medley of sardonic music cues, delightful hints of kitsch, and the pull of discovering which of many roads this plot could take. 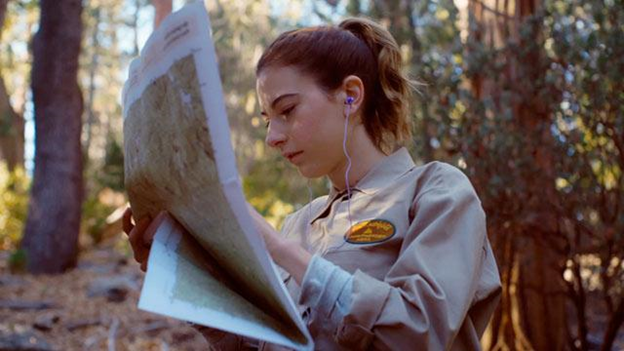 To lose a map this big, maybe you deserve to get lost in the woods

She has a hook, but Benjamin’s limited by her intensely restrictive means—with only 11.5 shooting days to film a feature on-location in the woods, I’m surprised we even have a movie to watch. Lugging that equipment, feeding a remote crew, and working from the power of ear-splitting generators are some of the unspoken nightmares of film production, and, for better or for worse, it becomes extra texture in BODY AT BRIGHTON ROCK.

By the time we reach the climactic battle between heroine and a large carnivorous mammal, one that’s been tongue-in-cheek signposted to the audience a hysterical number of times, it resembles classic REDNECK ZOMBIES-type shot-on-video filmmaking ludicrousness. When the film isn’t operating in this lovably cheap mode, it can become a slog. The night scenes are illegible, a combination of the pitfalls of outdoor cinematography and a non-permitting schedule that necessitated, and this is theorizing, a single light wash over the entire location so Benjamin and co. can power through the shots. The film wears its battle scars on its sleeves. 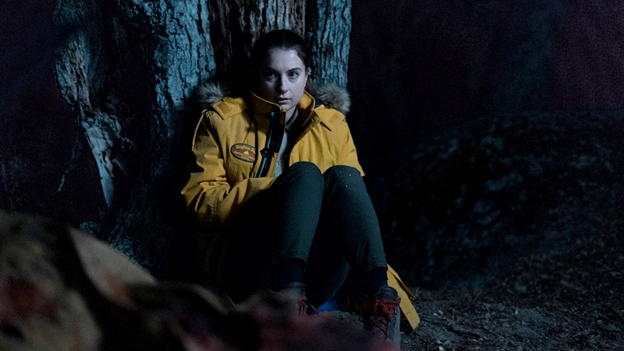 What ultimately unfolds is your standard “survive in the wilderness” thriller, a peculiar one that sets up a whole cast of plucky young rangers in the first act only to never see them again and a baffling twist ending that undoes all of what very little has transpired. It’s a sick and twisted farce of a finale, an anti-climax that reveals the true evil all along was being outdoors in the first place. The slap-in-the-face apogee of BODY AT BRIGHTON ROCK is that its lead character hates the outdoors so much that she envisions her entire time spent in it as a horror film. The film is under 90 minutes, but I wouldn’t blame someone walking away from Benjamin’s parlor trick enraged. As a real-life human being who’s been told by a licensed physician “for your health, you should never be outside,” I related deeply.

Deep at the core of BODY AT BRIGHTON ROCK is a more universally relatable ethos, one that I can’t help but think mirrors Benjamin’s experience as a filmmaker. Every character doubts Wendy, at one point being told point-blank, “you aren’t ready for this.” It may be true, but she knows more than she thinks she does, breaking through the put-downs and growing into a survivalist who can save her own hide against 600-pound forces that desire nothing more than to eat her. She’s set back by both personal and external faults, but look who came out the other end with the skin on her back. Roxanne Benjamin’s got a screenplay for the remake of the tubular NIGHT OF THE COMET slated next, and her chutzpah here gives me hope that she’ll grab a hold of the directing reins.

GAME OF THRONES: An Obituary