I keep a mason jar of marijuana cigarettes on the top of my fridge, high and away from view just in case any minors happen to be around—even though I rarely touch the devil’s lettuce, I keep it up there all the same, for friends and out-of-towners.

But, folks, I have to level with you: I took a toot on the ‘ol weed horn before I stepped into my screening of DORA AND THE LOST CITY OF GOLD. Hell, I kinda had to. I’m six-foot-seven, weigh roughly 250 pounds, and have a beard that I haven’t trimmed in many weeks. And when I saw the posters and trailers for the live action DORA THE EXPLORER movie, it was clear it was for children. See, I don’t have children. Like the jar of marijuana cigarettes on top of my fridge, I don’t mind others indulging, but it’s not for me. And since I don’t have a human ticket to get me into the movie, looking the way I do, I have to go high. And so while I’m not proud to say it, I took a puff or two on a jazz cigarette before I stepped into the screening and, folks, I can guarantee it wasn’t enough.

See, DORA AND THE LOST CITY OF GOLD is a confusing movie—not confusing because I was high, although the first 20 minutes were certainly slightly perplexing because of that, but confusing because I’m not exactly sure the universe or tone make any sense. Nicholas Stoller and Matthew Robinson’s screenplay shares a lot theoretically in common with what James Gunn tried to do with the 2002 live action SCOOBY DOO movie, in so much as both scripts want to be self-aware parodies of the insanity of children’s cartoons and yet neither actually commit to programming themselves for adults. Gunn has loudly proclaimed that he wanted to make a movie for adults that grew up on the original cartoons, offering knowing gags about how the characters were just high in the back of the Mystery Machine eating subs the whole time imagining their dog could talk, and there are moments of DORA AND THE LOST CITY OF GOLD where the film feels appropriately aware of how silly Dora’s buoyant wonderment and playing to the camera really is. A great scene early on sees a young Dora exclaim that her meal is “delicioso” before turning to the camera and asking the audience “Can you say delicioso?” It leads to a comical sequence where her parents (played by unfortunate-scientologist Michael Pena and delightfully-not-a-scientologist Eva Longoria) wonder just exactly who she’s talking to—think DEADPOOL for eight-year-olds. 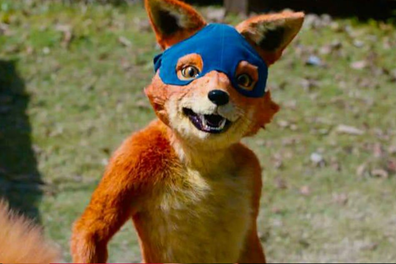 Totally, totally normal. Nothing strange about it.

In fact, the childhood Dora segments are where the played-to goofiness of the cartoon work best, and the film’s opening sees her and her cousin Diego running through the forest fighting off the bandit fox Swiper, who is wearing his iconic bandana and mumbling before it’s revealed that the entire adventure is happening entirely in the two children’s heads—a logical way to explain Dora’s adventures without stripping them of their validity. And yet, it turns out, that’s not really what’s happening at all. When Dora eventually grows up and is sent away to public school, her zany outlook on the world, one of sincere Saturday morning pleasantness, isn’t brought to a screeching halt by the harsh realities of the “real world,” nor has she just outgrown her childhood imagination. Instead rather than using the film to explore the dichotomy between being a child and having an imagination and the unfortunate actualities of being an adult (see: PETER PAN, THE SANTA CLAUSE, THE GOONIES), the other characters are either perplexed by some of the cartoonishness or take it at face value.

Most of this has to do with the inclusion of Swiper, whose presence in the initial childhood dream sequence is never upgraded to manifest something quote-unquote “realistic.” Instead, Swiper is simply…. Swiper. Voiced by Benicio Del Toro for some reason, he’s a cartoon fox who walks on two feet, wears a mask, works with the bad guys in the film, and speaks fucking English—he literally is a cartoon character, and yet no one seems to acknowledge this. All this, I suppose, would be fine, especially if I had taken three or four extra hits of that marijuana cigarette, except that A) we’ve seemingly already dispelled Swiper as a piece of Dora’s imagination in the opening scene, and B) the film features a sequence where Dora’s trusty monkey Boots talks to her (voiced amazingly by Danny Trejo), and when she excitedly tries to explain to her friends that her monkey spoke to her, they shrug this off as something that would be insane. Again: these people have seen Swiper, and find him to be a perfectly normal thing to exist in the universe, but a talking monkey is out of the question. 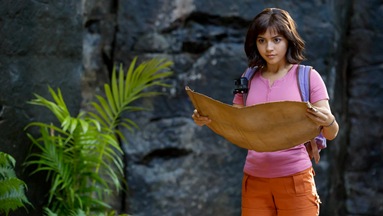 “…Moner, who’s actually 18 and looks it despite preventive measures.”  — Todd McCarthy, Critic of the Hollywood Reporter, saying totally normal and appropriate things in his review

And such is kind of the main flaw of the film. The universe James Bobin creates is sound enough from a story perspective, even if the movie is mostly just a child’s version of Spielberg’s INDIANA JONES AND THE LAST CRUSADE, straight with a final sequence that basically rips that film’s very memeable “you’ve chosen wisely” moment, and yet the uncanny valley of what world Dora lives in cannot be shaken. I found myself constantly recalling Woody Allen’s great PURPLE ROSE OF CAIRO, where characters understood the surrealness of the main character leaving the movie screen and entering real life. Certainly Dora seems like she’s crawled out of our TV screen and into the world of high school politics, and yet the film spends so little time exploring her relationship to high school that before we know it she’s right back in the jungle where the things she says and does are rarely met with the correct amount of self-awareness, and where the cartoonishness is no longer met with skepticism, but is simply reality.

Look: If you have kids, go. Eugenio Derbez gets some great laughs and remains a gifted physical comedian, the parents are a lot of fun, and INDIANA JONES AND THE LAST CRUSADE whips ass. But if you don’t have kids, smoke more than I did. Come over to my house, I’ll get the step-stool, you can find the mason jar in the back of the top of my fridge, and you can be as equally confused by the world of DORA AND THE LOST CITY OF GOLD as I was.

Charming, Dark, and Funny, David Berman Is at His Best on PURPLE MOUNTAINS