It took me 12 full days to work up the bravery to write about MIDSOMMAR. I watched Ari Aster’s demonic debut, HEREDITARY, on an early Utah morning at Sundance and the film, ultimately my favorite of its year, bummed me out so badly that I skipped the rest of the day’s screenings, opting instead to stay inside and eat a meat lover’s pizza by my lonesome. I was completely unprepared for Aster’s brutal storytelling, every one of his characters’ incendiary lines scorching its recipient. An Ari Aster film is nothing but moments that breach the point of no return. I was so overwhelmed by the unflinching dread of MIDSOMMAR that I may as well have been one of his characters, my scream sobs on the car ride home exorcising both agitated and newly formed anxieties.

MIDSOMMAR engages with traditional framework to establish location and stakes as we follow a herd of culturally territorial, traveling grad students living in a slow-motion car crash while the inhabitants of the Harga, a commune deep in Sweden’s mountains, revel in a week of Valerie’s wonders. “Let’s do THE WICKER MAN” has been a trend-turned-rite-of-passage in the 2010s for genre directors, and while MIDSOMMAR carries out exactly as hopefully as you’d expect it to, it’s not concerned very much with satiating expectations for ooky spooky scares. It’s busy hanging its head in the clouds of unearthed feelings and the sensual subtleties of psychotropics. There’s literally a character named Ingmar, but MIDSOMMAR is more linked to the mood-centric, two-handed suffocation of Gapar Noé. Many may stay fixated on the specific properties of the strange herbs in the tea, but Aster’s constructed a filmic exercise in dread and altered sympathies more interested in how the toxins travel through your bloodstream.

Ari Aster’s characters are infatuated with the taboos of a white commune living off the grid, their studies so honed in on breaking an exotic story that they turn a deaf ear to their own liquidation, yet MIDSOMMAR’s purposefully lenient rules for his universe, fraught with inconsistencies and contradictions, reinstate Aster’s mission to recreate the feeling of the steel sheet between your chest and the mark of a full breath. To rip apart MIDSOMMAR by its narrative seams for plot inconsistencies, broad characters, or exposition is a futile effort. Aster is capable of spinning a yarn, no doubt, but his works are ones of tattered emotion draped over genre blueprints, like a human skin-suit over a vacant smile.

It’s quicksand horror. The erasure of evasion; the walls have closed in too tightly and a fate by deliberate crushing is somehow more appealing than the repercussions of attempting an escape. If you somehow come out the other end unscathed, perhaps you’d rather have literal asphyxiation than a lifetime of shaking the grains out from your shoes. Despite its wide-open locale, the blue sky walls close in like a trash compactor. What’s most harrowing about MIDSOMMAR ain’t the Caucasian customs, it’s that even with countless avenues of escape around you, your willpower will simply give out. Your fate’s been predetermined by the first step in the pit. Most impressive is getting that kind of rise out of watching a band of grad students keen on the intellectual seizure of the Harga’s forcibly commodified regional identity. Even if the sacramental flaying is determined by tradition, these cultists sure are adding a bit of flair in dispatching this particular batch of meddlesome, very American outsiders (shame about that English couple, though, they got dealt the dirtiest hand of the film), and, you know? It’s sort of a blast to watch unfold. If the group is a stand-in for American isolationist apprehensions, then Will Poulter, in full WE’RE THE MILLERS mode, exclaiming, “Oh fuck, it’s a new person” during a welcoming shroom trip is indicative of MIDSOMMAR’s take on our foreign policy. 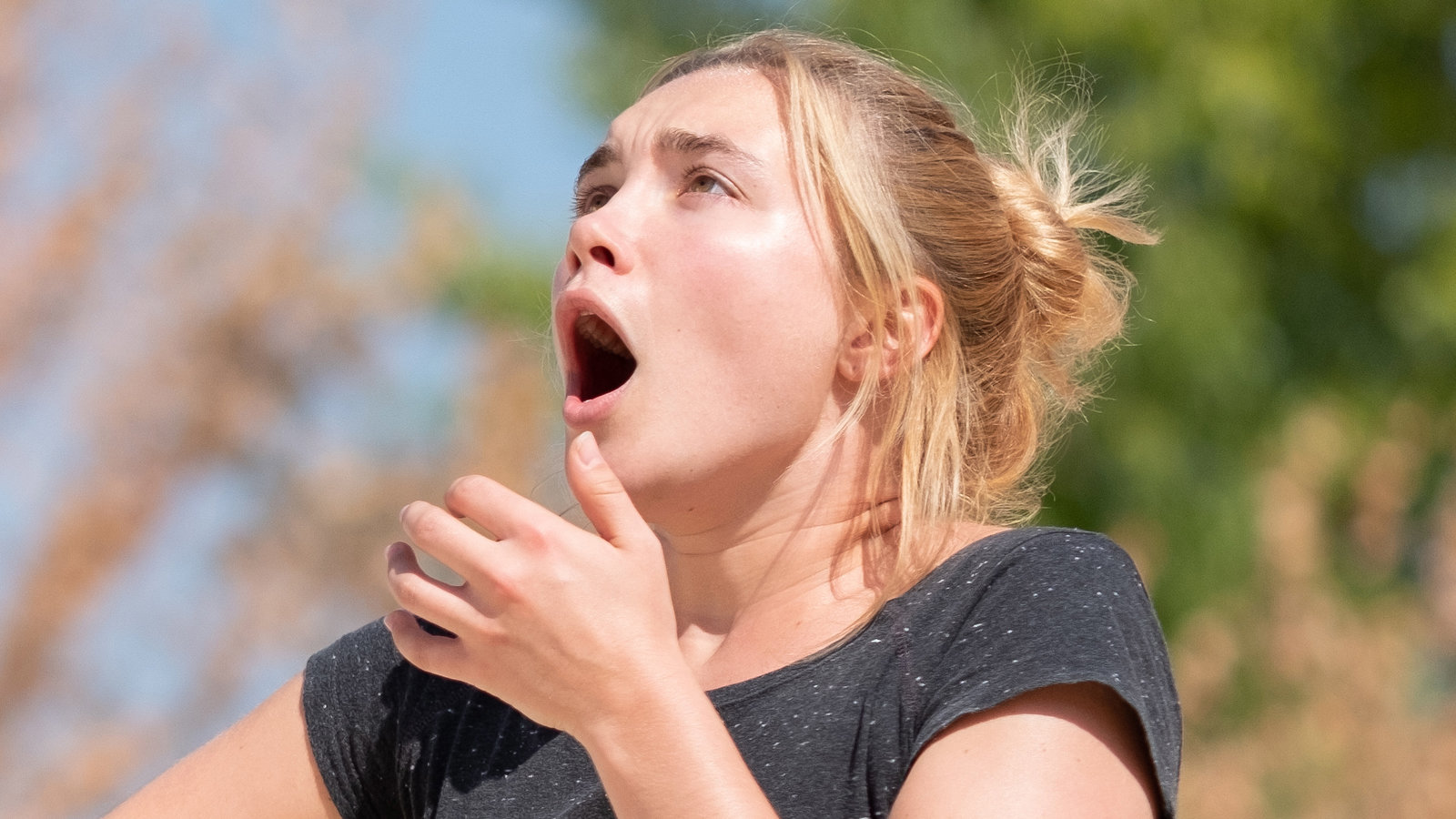 Florence Pugh is in Nicole Kidman’s role, if we are to understand this as Ari Aster’s DOGVILLE, and where Lars’ picture portrayed a swift act of disciplinary Christian judgment, Pugh’s voyage into an unclouded subconscious is the gruelingly prolonged inverse, her reckoning of the self translating to the reckoning of the social body. She’s a powerhouse, though also the clearest sign of Aster’s quick turnaround. She’s playing Toni Collette with the added layer of serene relief—watching Pugh’s Dani find her healing community in the essence of Hell is a beautiful atrocity.

Aster presents suffering as prophecy, not as a cataclysm but as divinity. While hardly new-trodden ground in pagan horror, I’ve never seen a film in the subgenre insular to the point of emotional singularity. The horrific rituals of a 40+ person commune secluded in the mountains of Sweden as filtered through transcendental despair feels like the opening of a black hole. Aster fiddles with our perceptions of their actions—on one hand, it’s THE TEXAS CHAIN SAW MASSACRE, but on the other, it’s a young woman’s EAT PRAY LOVE as she’s indoctrinated to normalize violence to leave a limp relationship devoid of meaningful intimacy. Catharsis is not clean. If the painting in Dani’s apartment is any indication, the little princess will always be bowing to the bear. Forging a new family, one that feels as she feels, has created a new bedrock for a path to stability, warped it may be, yet the bear’s burnt stench will forever linger as the reason for the season. The more you make a deal out of a break-up, the more inseparable your partner is from the fabric of oneself and, boy howdy, is that a fucking nightmare. 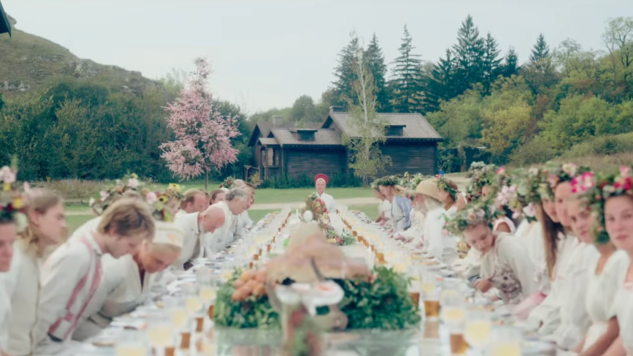 Teaming with Bobby Krlic, otherwise known as ambient producer The Haxan Cloak, MIDSOMMAR’s score is like a Jonny Greenwood orchestration escorted through a gas chamber; “For the Hungry Boy” fed capsules of slow-acting cyanide. Krlic hard shifts from swooning wistfulness to bellowing horns and rising strings that whirl like air-raid sirens. At first, there’s a clear contrast between the two. However, once Dani witnesses the act of killing as the source of rehabilitating joy, a sort of abreaction, serenity, and slaughter morph into one. She isn’t reliving a past experience, exactly, but it is as if she was never not meant to live through her present—MIDSOMMAR’s sense of gruesome chance and destiny is entirely sold through its stellar music.

De Palma’s CARRIE is a major influence, though MIDSOMMAR removes its tongue from the cheek just enough to inspire a cobbler of terror and confusion. Most daring is its insistence on pushing past just Dani’s POV. The film’s language puts the viewer through her very same empathetic quagmire—many fans of MIDSOMMAR have walked away from the film with a great weight taken off their shoulders, memories of past toxic loves burned at the post captured on celluloid, yet at what cost? Insidious trickery abound, both in the Harga and Aster’s repertoire, his gags running the gamut from Chekhov’s bear down to the exposure levels. A senicide ritual is brightly blown out to the point of a complete color wash, mimicking the psychological beat-down of a midnight sun and the tourists’ relatively overblown reactions. Maybe more affecting than Aster’s penchant for the apocalypse is his tactical cheekiness. An intimate rendezvous between Dani and Pelle ends with him asking her if Christian “feels like home to her.” Cue the immediate smash cut to a close-up of two caved-in elderly heads being roasted over a bonfire. Many of the early shots of the film are ripped right from the hysterically misanthropic works of Roy Andersson, and, while the humor works best in these flourishes more than the moment Poulter urinates on a sacred tree (HEREDITARY’s worst moment is a cardboard box labeled “Mom’s Things” that’s been borrowed from a sophomore year film school set; this pissing scene is MIDSOMMAR’s version), it’s a dastardly method of letting the audience’s guard down to jab ‘em in the throat.

There’s an unspoken rule in virtual reality game design to never purposefully aim to disrupt the player’s intrinsic sense of reality or self. Most games and experiences on the market are transportive and atmospheric, but they hold back on trickery that tinker with your nervous system—I always think of RESIDENT EVIL 7, where if you physically stand up while your character is stuck in a crawlspace, the character’s head will hit the ceiling and stop moving, causing the player’s legs to buckle. Ari Aster is somehow able to convey these magnificently visceral exploits to a non-interactive form—the choreography of the delicate, long tracking shots keep reorienting the axis, switching angles from those of the viewer to that of the group to those of particular characters all in simple motions. It turns what could be staid establishing shots into shuffles of order into chaos and observation into gaze. Temple-to-temple grinning, MIDSOMMAR is yearning for buckling legs and crushed spirits.

And yet, yes, HEREDITARY is the better film. HEREDITARY reaches the heights of cosmic tragedy, every life lost by unexplainably macabre circumstances. Dani’s grief over a murder-suicide in her nuclear family is a double-edged sword, a key introductory bit of character backstory that founds the lunacy of the protagonist’s arc, but also primarily functions as exposition. We don’t spend nearly enough time with Dani and her boyfriend, only grasping a surface-level understanding of their relationship, nor nearly enough regarding Dani’s memories of her family. It’s a mesmerizing-intro-turned-half-baked-subplot that detracts from MIDSOMMAR being a full-hog operatic break-up movie—I’d had much rathered keen emphasis on one of these traumatic throughlines, given that so much afflicts Dani by the film’s end that it can seem Aster is making her a Mr. Bill cypher before making her a human.

Utilizing both throughlines is a necessary evil for a general audience (A24, daring as they acclaim themselves to be, still needs to get paying butts in those chairs), but it’s too bad, because the ending fails to strike the high-note it boldly claims to. The whole film is a series of genre clichés, as to be expected, but much is too thin; at its core, MIDSOMMAR’s over-two-hours of watching skittish visitors react to one event after another. The characters are largely inactive, the film’s finale feeling less of a conclusion to a fatal odyssey and more the end of a line of dominoes, and while this is very much part of the design, its transparent enough that we see the spinning gears too clearly. In being a film about grief but also about doomed romance but also about damaged psyche but also partly about [blank], MIDSOMMAR gets lost in its own thematic weeds. It could be that MIDSOMMAR is a formidable, yet considerably rocky follow-up for Ari Aster, or I may just be getting bullishly defensive about a movie that genuinely made me consider psychotherapy.