Full disclosure: Despite being one of the biggest MCU marks amongst my circle of friends, I’ve been incredibly jaded by the uberfranchise in the past year. I’ve found the Disney+ shows overall pretty middling, and I’ve despised every feature length entry from 2020 til now outside of SHANG-CHI, which actually benefited from turning into a JOURNEY TO THE WEST CGI-filled Pokémon movie in the last act. Sitting in the theater for the interminable runtimes of BLACK WIDOW, ETERNALS, and SPIDER-MAN: NO WAY HOME, I felt a truly necrotic impulse that these were some of the most cynically produced anti-movies I had ever seen, even by MCU standards!). These were experiences I was loath to sit through again; long gone were the days where these were my dumb popcorn flicks that I could grade on a curve. Instead, I was slogging through nearly three-hour stretches of miserable by-committee pinch loaf slop, everything clearly shot on a green screen and looking like a theme park ride preshow, with screenplays plucked from the minds of those hack YA authors on Twitter who try to get classic literature banned from schools.

Nearly 15 years since the inception of the Marvel Cinematic Universe, I have felt the ever tightening grip of a monkey’s paw bargain I never asked for. I never asked for Marvel movies to become the dominant cultural force of our time, both the impetus and benefactor of extreme, accelerated late capitalist monopoly; the overt imperialist mythmaking with obvious, blatant Department of Defense notes; the serpentine stranglehold suffocating any and all other movies not beholden to their slight “epic” genre pleasures, or to be the bane of Marty Scorsese’s existence. I never asked for this—but I still helped facilitate it by getting my ass in a seat every time, and sometimes multiple times. 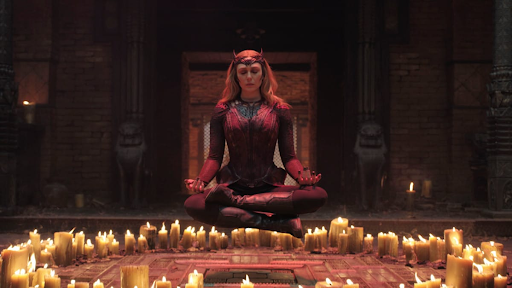 One thing that I think gets lost in most discourse surrounding the MCU, and something I think is a big factor in the overall success of the endeavor, is that the target audience (people in my age cohort and younger) were mostly primed for this style of storytelling through both the 90s Marvel cartoons (specifically SPIDER-MAN and X-MEN) and the slate of shonen anime on Toonami. Shonen media—and, in turn, the 90s Marvel shows—is serialized in such a way that people focus more on plot arcs than individual episodes or chapters, and this was an approach the MCU applied to film in a way that seems objectively insane but obviously became highly lucrative. It goes without saying, those cleverly gotten gains triggered a devastating butterfly effect on any other creative pursuit in Hollywood. MCU movies became less about the journey and explicitly about the destination. Each subsequent film merely a stepping stone in another Phase biding time for fan service payoff. The fact that they were able to pull it off for at least a decade is kind of a miracle.

With all that out of the way and having been said… Dear reader, I really, really fucking enjoyed DOCTOR STRANGE IN THE MULTIVERSE OF MADNESS.

The only way they could have resuscitated these movies is by bringing on Sam Raimi, without question the greatest superhero film director of all time. This is far and away the most visually interesting film in the Marvel canon, and so much of it is down to the established authorial touch of Raimi. Everything about this movie plays to his strengths, and even without the weight of convoluted multi-movie lore, if you just go into it expecting a Sam Raimi joint you will leave happy. It is goofy and horrifying and scary and schmaltzy and sick as hell in all the ways the best Sam Raimi movies are, and in turn the best pulp comic book stories are. I spent a lot of time in college drinking framboise and reading old Ditko era Doctor Strange comics, and I think Sam Raimi gets that too. 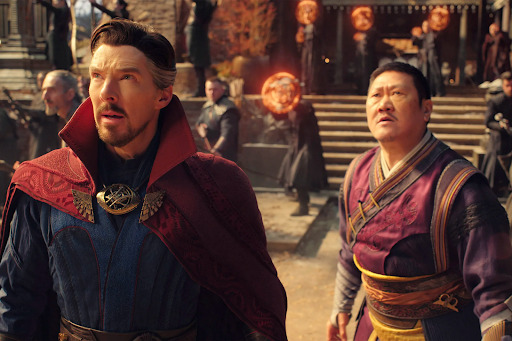 So much of this movie was such a wonderful surprise. There’s some gruesome kills that stretch the PG-13 rating. The emotional motivations for the characters feel earned even without the baggage of the multiple movies and seasons of TV that got them to this point. Rami gets to sink into some heavy themes about internalizing unhappiness until you become the most monstrous version of yourself. There’s just a general deftness and level of craft that has felt bereft in the recent Marvel Studios product. It somehow feels singular while also being a part of the greater multiversal whole. Therein lies the dueling dichotomy of Marvel Studios hiring Raimi in the first place: if we are to continue to believe that these movies are anti-cinema, pure cynical product meant to be consumed and churned ad nauseum, then what are we to make of it when one is directed by an auteur such as Raimi, the last of a dying breed, one of the most influential directors of the past 50 years?

The push and pull of this intellectual and emotional whiplash was only underscored by the fact that I chose to see this movie in 35mm at the New Beverly Cinema, Quentin Tarantino’s veritable church of LA moviegoing, a spot for *real* cinema lovers. Is this an indication of a tarnished legacy, ushering in film print screenings of theme park cape shit? I’d say no. DOCTOR STRANGE 2’s New Bev programming fits the month’s theme of “Halfway to Halloween,” which features several other screenings of Raimi’s films. The storied Hollywood theater has been showing fresh prints of brand new movies since December (likely as a test balloon for Tarantino’s management of the revamped Vista Theatre, which will reportedly screen new prints of recent films as opposed to the Bev’s repertory programming). Besides, many of Tarantino’s 90s peers all became shepherds of massive franchises. Jon Favreau is essentially overseeing Star Wars now; Joss whatshisnuts established the modern team-up template with THE AVENGERS, and Tarantino himself spent years teasing his own STAR TREK. But certainly, yes, there’s a cognitive dissonance in watching Charlize Theron show up as Clea in the same seats where you can watch COCKFIGHTER and THE GETAWAY.

If anything, the way in which I watched this movie was weirder and woolier than the film itself—that being said, I had a great time at the movies! I was hooting and hollering throughout, and somehow seeing this CGI-laden studio product on film with an engaged New Beverly crowd made it all the better. Watching NO WAY HOME at the AMC Burbank 16 in December, I was crawling in my skin as a veritable jet engine of performative Pavlovian crowd cheers punctuated every 10 second pause for a fan service Moment, all of which left me absolutely numb. Being amongst a crowd of fellow Raimi-heads earnestly stoked for our Bruce Campbell cameos felt like a—pardon the metaphoric pun here—completely different universe. When you boil it down, Sam Raimi is the only guy who could have made this movie. Distilled to its very core, this is a movie about a sorcerer and a witch fighting across dimensions over access to magical books. This is material Raimi has established dibs on! Bravissimo, Maestro Raimi! I bow to you and kiss your ring, you Michigander legend. Hail to the King, baby. Welcome back. 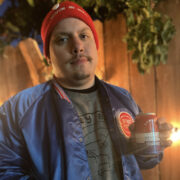 Luke Phillips
Luke Phillips is a radio promoter currently living in Los Angeles. His go-to karaoke song is "A Little Respect" by Erasure. You can usually find him going to local pro wrestling shows, playing Dungeons & Dragons, at the movies, or some twisted combination of the three.