*Minor spoilers ahead for the terrific KNIVES OUT*

Rian Johnson might be a masochist. Who else after the most divisive studio picture of the decade would chase a passion project that, by its design, is seen more as a challenge than a film. People do not approach whodunnits as stories, they approach them as group puzzles to be scrutinized and, most importantly, solved. The entire point is to try and get ahead of the clues and be a better detective than the actual on-screen detective. So when KNIVES OUT unlocks the door to the escape room in the first act, many viewers will be left cold in the hallways wondering why their ride was cut short. Johnson has made a film for those who prefer the machinations of the watchers in the control room.

KNIVES OUT pivots the mechanics of CLUE towards people of color in America forcibly inserted into labyrinthine, tortuous narratives of intentionally confused criminality by white supremacists, against their will and by the doctrine of a final will and testament. The who in the dunnit is outed less then 40 minutes in, and it’s the best decision the movie could possibly make, going from a tale of stale genre inevitabilities to an evidence-tampering Latina caper starring the indelible Ana de Armas. The film opens with a series of simple scenes, jumping between tame police interviews and flashbacks to a quaint birthday party for the elderly patriarch of a literary empire. On the surface, it’s so fun to watch a collection of the best living actors chew on the snappiest script of all their respective careers. It’s the funniest straight-up comedy of 2019, but you catch the movie’s drift quickly and get ready to settle in for a breezy, light ride. 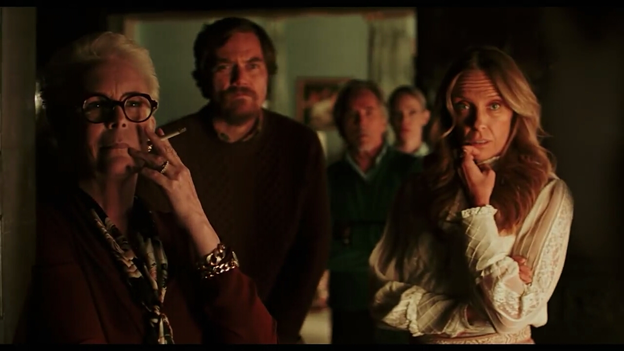 These simple scenes start to open up. Whispers turn to murmurs, highlighted background conversations give weighted context to the phrase “like family,” and mild thumps in the night become smoking guns. The centerpiece death of Harlan Thrombey is incredible, as is the discovery that all the children’s depositions have been unwittingly authored by the victim himself, making his demise a call to rest and a final cruel joke on the brats he calls sons and daughters. Instead of THE HATEFUL EIGHT’s gladiator match of the nation’s warring demographics, KNIVES OUT is a sea monkey habitat exploring what would happen if one of our mega-billionaires went rogue and redistributed his wealth via internal chaos. What’s right is not fair, and the pursuit of fairness is nothing but a halting appeasement to the dictators. To make the infernal wrongs of America right, you need to strip the birthright from the scum—it’s a lot easier said than done, which is why Harlan Thrombey’s looney act of deviant altruism is, past the horror show it puts Marta through, a bloody, touching attempt to right wrongs. The portrayal of Marta’s family feels distinctly Mexican, but De Armas is Cuban and her character’s running joke is that her nationality is constantly misidentified by the Thrombeys—in the United States, the immigrant story purposefully molds the capable into grouped-together dependents, ghettoizing not only residencies but entire identities. In addition to a dictating family breathing down her neck, Marta is in a country working to whittle her down on a cellular level.

Gotta love the BREAKING BAD alumni’s insistence on narratives based in constant “How the fucking fuck are they gonna get out of THIS one?” speculation. While you’re certain no one’s in danger of getting suddenly shot in the head, every character is forced into decisions of no return and little preparation, pushing everyone into the impulses that reveal the most character. God, damn, dude, I wanna watch this again right now. Rian is one of us. He brings to his films bushels of shower thoughts, the types of scenarios and bits of dialogue we run by ourselves in sudsy stupor and forget to write down—like, what if a murder suspect who puked anytime she lied was fed a plate of sausage and beans before a line of questioning in a packed pub? Or what if Michael Shannon played a character who loved rushing up on people to get up in their faces, but had to do it with a limp and cane? 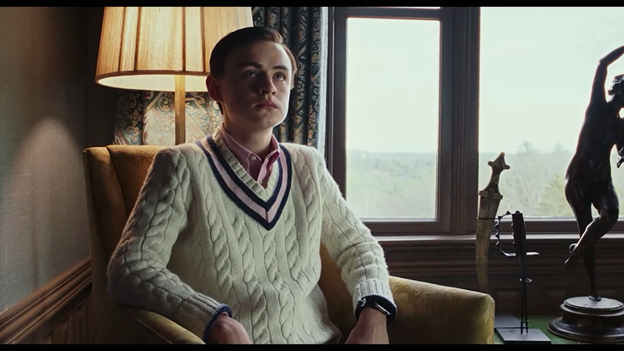 As bold as THE LAST JEDI is, and this very film still is, it is clear that the 365+ days of lame-ass onslaughts from IGN-readers and angry men have understandably fried a few of Johnson’s natural instincts. He’s still firing off clever rounds of wit, but with a bit of hesitation in the draw. The ultra-wide frame gives everything a toy-off-the-shelf sheen, while all the proceedings are a lil quiet. There’s a missing balance between the sometimes pedestrian vision here and the version of this movie I can vividly imagine that’s too loud, showing its full hand with musical stingers at every turn, with editing and cinematography that’d bring to light many “this is bootleg Edgar Wright” criticisms. And Johnson has seen that version in his head! Rian’s on Twitter, he knows just about every which way a leveling 280-character critique can be dished. He overthinks and underthinks a handful of KNIVES OUT’s wonkier scenes, with some running distractingly slow given the madcap screwball sensibilities and others tinted with deafening silence. Nathan Johnson’s score is great (“The Thrombey Family Theme” is incredible), so I don’t know why there’s so many moments in KNIVES OUT where the *only* audio is character dialogue. It gets to the point where I was convinced my theater’s print accidentally left a Pro Tools channel muted.

Sprinkles of “snowflakes” and “alt-right trolls” in the dialogue could induce an eye-roll or two, especially considering Johnson’s familiarity with the terms primarily through the ugly children of STAR WARS, but these embarrassing phrases completely match the squares saying them—listen to any white mouth with no desire to read a book, but every yearning to shush a Mexican and you’ll quickly see that Twitter language is the yokel’s go-to, inbred spiel for reactionary politics. This is an obvious truth, but it sometimes feels like we forget that these terms are still worth dunking on. Unfortunately, as fun as the roasting of a millionaire’s kids is, the ultimate mystery can only be as complex as these morons. The steps of the mystery don’t get much windier than some Roger Stone-type clumsy espionage, with clues as out in the open as a Richard Nixon back tattoo. Going all-out with a clockwork, clever conundrum would be giving the perpetrator way too much credit, whichever one of these plantation owners in a past life it may be. 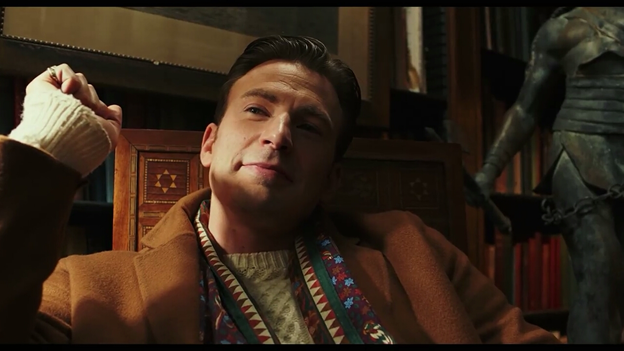 The mystery’s resolution, while sporting Daniel Craig’s most MVP highlights as a walking, talking Hummingbird Cake, is the script suddenly breaking into backflips to wrap everything up—it feels like skipping three episodes in your binge watch. Part of the humor of the finale is the sheer amount of backflipping, but Johnson’s treatment is ultimately simpler than I was hoping for a piece of work this well-wound. Harlan’s sprawling estate, ripe for investigation, is mostly unexplored. There’s a fun insinuation that the manor’s decor is filled with references to his body of work, a prolific series of mystery novels, but rather than serving any substantive thread for the investigation or a deeper conspiracy (AKA the murder carried out in homage to the author’s fictional works), it’s gothic place-setting, no more, no less. This movie works as well as it does because it’s so small-scaled, but there’s just so much untapped material here. That’s mostly a selfish complaint, though, I’d gladly watch an eight-hour mini-series cut of all this. But, like, someone says the line “joylessly masturbating to pictures of dead deer,” so win some, lose some. Bless KNIVES OUT, a movie I’ll realize is one of my favorites of this decade late next decade when I’m rewatching it for the ninth time on Amazon Prime.

I’ll actually join in on the anti-LAST JEDI crowd for once—Disney, please, take Rian Johnson’s planned STAR WARS trilogy away. Sorry, Rian, but if it means a film like KNIVES OUT becomes more commonplace instead of a studio rarity, I’m all for a divorce from The Mouse. The king of the bottle episode’s whodunnit is satisfying as a subversive homage and intensely gratifying as a Latino story—Rian and Karina got themselves a plate at the Cookman carne asada any weekend.