Do we think Scott Derrickson saw DOCTOR STRANGE IN THE MULTIVERSE OF MADNESS?

He executive produced the recent blockbuster, sure, but that feels like a make good after a split with Marvel under the exhaustingly overplayed “creative differences” public relations play. Daddy Feige tried to shut down the internet’s wild speculation that Derrickson wanted to pull from his darker horror roots for the second DOCTOR STRANGE film, but if you saw Sam Rami’s odd, sanitized sequel, I’m sure there is a hint of truth to that rumor. So it’s worth asking: What were those creative differences, exactly, and why on earth did they drive him to THE BLACK PHONE?

An adaptation of a 2004 short story of the same name by Joe Hill, THE BLACK PHONE is nearly as nonsensical as Raimi’s MULTIVERSE OF MADNESS, although it lacks the benefit of a decade and a half of superhero lore to hide behind. Set in 1978, C. Robert Cargill’s adapted script focuses on a mysterious child abductor nicknamed “The Grabber,” who pulls kids into his black panel van, leaving behind floating black balloons. The Grabber messes with the wrong kid when he abducts Finney (Mason Thames), whose sister (Madeleine McGraw) is experiencing psychic dreams the cops proactively buy into, and who has a mystical streak himself when the titular black phone in the basement where he’s being kept captive begins ringing with the voices of the dead children before him.

There are certainly things, on paper I suppose, that are compelling about THE BLACK PHONE. Ethan Hawke, one of Gen X’s finest, is always excellent when a role has a twist of evil to it. Just the image of The Grabber wearing a toothy, sneering mask shirtless at the top of the stairs, waiting for an abducted Finney to climb out from the basement to beat them with a belt, is nearly worth the price of admission. It’s accentuated by the spooky air of Derrickson’s 1978 Denver, the bike-riding freedom of youth stripped bare to reveal a fabricated sinisterness that cultivated in elementary school “stranger danger” lessons decades later. Hawke’s Pennywise-ish glee embodies a darkness that translates tremendously to images of missing-children milk cartons and empty school desks; the performance is striking enough in theory that, even if the film never wants to turn to the real world horrors depicted in films like PRISONERS or ROOM, it still strikes a nerve.

But that’s kind of where the horror of THE BLACK PHONE ends—ultimately untapped and undeveloped. Two good jump scares, both propelled more by odd and unexplained supernatural components, fail to compliment the malaised ickiness of a man pulling a kid into a van and trapping him in his basement. Honestly I’d respect Derrickson more if he just made the villain an actual pedophile, or a deranged pervert at the very least. The Grabber might kill these kids, sure, but it’s all implied and left to the aforementioned offscreen atmosphere. His motivations? Well, they’re murky, but hardly the stuff of actual nightmares. We’re led early on by small hints of The Grabber’s presumably sympathetic childhood with an abusive father, a notion the filmmakers are lucky only exists as fleeting, forgettable dialogue early on lest it become any more embarrassingly toothless. It’s like someone at Blumhouse gave the note that self righteous strawmen on social media were going to be mad that The Grabber’s evilness was never clearly justified and thus lacked empathy, as though the isolated act of kidnapping and torturing children needs manufactured childhood trauma to course correct such heinous crimes. On the one hand, you can’t have a villain that just wants to kill these kids for unspecified reasons—even Jason Voorhees is killing campers for some reason. But THE BLACK PHONE fails at delivering a poor backstory and charts course immediately to portraying him a goofy weirdo who sometimes kills school children, letting the offscreen violence do too much heavy lifting. You want a quick fix? We all hate pedophiles. Just let Ethan Hawke diddle kids offscreen and move on. 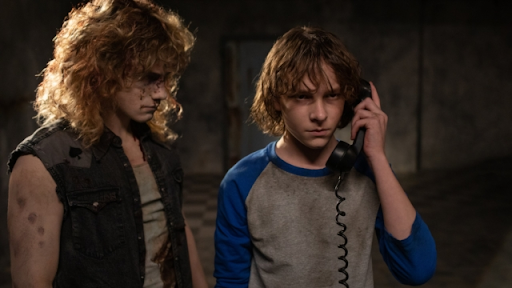 The problem is it’s not just The Grabber whose headscratchingly buffoonish given the film’s context. The backstory about the sister’s psychic lineage never develops, embarrassingly being introduced in the film through a pair of detectives pulling her out of class unprompted to ask about her supposed visions/dreams; I’m old enough to remember kids being tortured in A NIGHTMARE ON ELM STREET and no one believing it was real, but apparently Derrickson’s had enough of that shit and just let the cops go straight ot the source. And this says nothing of dead children talking magically through a phone to lead Finney to safety, a storytelling device that plays out like a THE SIXTH SENSE quick time event. Press A to check the wall for a lock code that some dead 12-year old scratched into the wall; Press X and Y at the same time to throw a lassoed rope around the basement window edge. The video game logic of the captivity borders on HOME ALONE levels of silliness.

Cargill claims Derrickson was enthusiastically jumping from MULTIVERSE OF MADNESS to THE BLACK PHONE, a movie he begged to be a part of. I would never say that’s not true, as I don’t know Derrickson, but if that is true, that’s a remarkable choice to make—David vs. Goliath when David is just a rare, barely-competent theatrical horror movie in the year 2022, a feat that itself is cause for apparent celebration. When I was in middle school, I snuck into Derrickson’s THE EXORCISM OF EMILY ROSE, a film that I was busy hormonally talking through with the girls I was with that probably would’ve been pretty scary if I’d bothered to watch it. Maybe there are teens sneaking into THE BLACK PHONE, terrified by Hawke’s protruding belly and deadpanned mask at the top of the basement stairs. But in reality I’m sure they’re at home ignoring Stephen Strange tell Bruce Campbell to punch himself on Disney+ while they send each other TikToks about Kendall Jenner or school shootings. Good for Derrickson to choose art over commerce at any cost.