After years of audiences foaming at the mouth, eager studio heads unable to secure a taut enough script to do the concept justice, finally, cinematic messiah/writer-director Kim Nguyen has given us what we’ve all been clamoring for: a cat-and-mouse thriller about… fiber-optics? In a nice surprise, THE HUMMINGBIRD PROJECT is actually a very agreeable little film, rooted in epochal specificity and efficient characterizations, only suffering when Nguyen overcompensates for the premise’s inherent subtlety by telegraphing what probably should have remained buried.

Jesse Eisenberg plays Vincent Zaleski, a high-frequency trader (per the IMDB description, I don’t claim to know a thing about stocks/brokers) who teams up with his cousin, Anton (an unrecognizable Alexander Skarsgard) to build a fiber-optic line between Kansas and the NYSE. Tailing them at every step is their former boss—Salma Hayek’s Eva Torres—who scrambles to devise her own system that will enable her company to buy and sell shares sooner than the competitors (milliseconds is the name of the game, here). If it all sounds overly technical, Nguyen ensures that the particulars are elaborated upon and oversimplified by way of analogy numerous times throughout the film (a welcome tactic, if a little dramaturgically timid).

Nguyen is obviously a fan of THE SOCIAL NETWORK, down to the casting of Eisenberg, and, to be sure, the feature feels slightly derivative, if only for its attempts to dilute tech minutiae into pulpy drama. Nguyen offers an efficient setup, finding Vincent, a more managerial, hardball type, unsatisfied with his current position with Torres. Anton, an anxious and antisocial coder, also works for the headstrong CEO, though he’s more or less content with his post—until an insatiable Vincent convinces Anton to quit and dedicate himself to building the new line. The pair team up with a contractor named Mark (a revelatory Michael Mando) and set out to achieve world domination—or something like that. 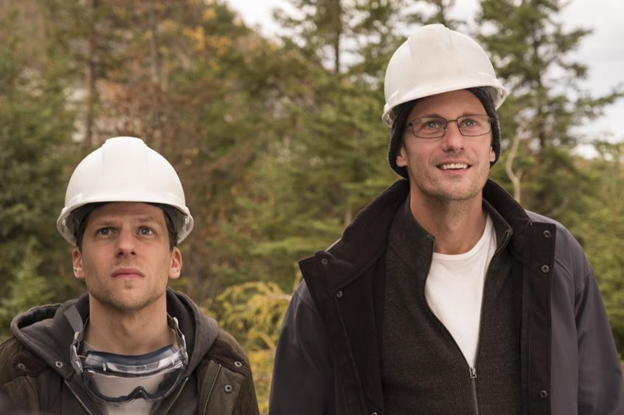 I promise it’s not as dorky as this looks

As made evident by dialogue, it’s essentially a David vs. Goliath story in which we’re not sure who’s who. It’s an intriguing idea, and a funny one—Nguyen is more than comfortable with dark humor, with the helmer crafting one particular anecdote involving a housing development and fecal matter that’s so specific it must’ve been relayed to her by a beleaguered witness. It’s a meticulously researched film—as far as I know Nguyen isn’t a Wall Street-insider, or a land developer, yet she nails the literal-minded vernacular of these people. THE HUMMINGBIRD PROJECT isn’t based on a true story, or a memoir, but it feels like it, which is about as complimentary one can get when it comes to films of this ilk.

Complications arise soon after the onset of the project. Vincent is offered a troubling diagnosis and Anton’s mental state starts to deteriorate after failing to shave a millisecond off the team’s response team: the goal is 16 milliseconds, approximately the length of one flap of a hummingbird’s wings. Eisenberg is doing more of a Lex Luthor thing here than Mark Zuckerberg, exaggerating his nervous arrogance to just below comic heights, resulting in some behavioral tics that may or may not serve the character. It’s generally good work, though, and he shines in scenes of confrontation with civilians who aren’t predisposed to the idea of a massive drill digging underneath their homes—though it may be difficult to imagine Vincent as the charismatic type because of his stockpile of vitriol, he can turn on the charm considerably if it means fulfilling his vision. 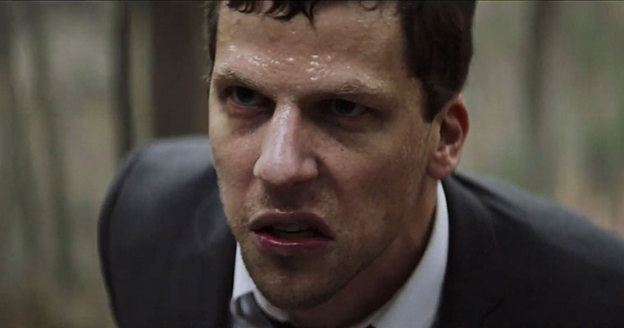 What, did you just see Superman?

Skarsgard is excellent, dissolving into the hysterics of the role with grace (though his character’s unfortunate hairline is more than a little artificial-looking to my eye). Nguyen’s clearly having a blast with Anton, staging a scene where he forces a server to sign an NDA on a napkin before telling her of the project. Hayek is nothing more than fine, though I suspect it’s the script that’s the issue here, with Torres coming across as far too cartoonish to register effectively—and Nguyen’s indiscriminate use of low-angles don’t help matters.

The picture isn’t necessarily awash in visual splendor, though Nguyen crafts one image of Vincent on the examining table with the physician easing a tube (line) down his throat that is genuinely startling in its implications and potency. Sound design is accomplished, the roaring of chainsaws aggravated and sharpened following Vincent’s hospital visit. HUMMINGBIRD doesn’t quite stick the landing, Nguyen opting to close on a note that feels too clean given everything that’s come before, but up until that point it’s reliably solid work, never less than entertaining, and it’s always nice to see a film tailored for an exclusively adult audience (it’s hard to imagine the kiddos flocking to see this one, for some reason). Not bad for a thriller about fiber-optics.