I will admit: several months ago, I was prepared to be driving THE LOST CITY bandwagon. A mid-budget studio rom-com? In this economy? What the film possibly represented meant far more than the probable quality of the film itself, Sanda Bullock’s batting eyelashes be damned. Type “Mid-Budget Movies” into Google and you’ll find every notable film blog and media mag writing a thinkpiece about their death or analyzing their importance in the Hollywood ecosystem. To see one in the wild was a sight to behold.

Now having watched it, and having lifted my proverbial finger to the wind, I get a sense that this sentiment still prevails. Even if we had collectively hoped for the best, the fact that the movie exists remains remarkable enough to ignore some of its many faults. Like ROMANCING THE STONE, or SIX DAYS AND SEVEN NIGHTS, or FOOL’S GOLD before it, THE LOST CITY is relying on star power to carry what is an otherwise paint-by-numbers affair; loose jokes and a colorful setting can only go so far, and ultimately the thing that carries THE LOST CITY more than anything is the myth that these types of movies could work at all in 2022.

Make no doubt about it: THE LOST CITY is… fine. In many ways, fine is good enough. Loosely it’s a story about a romance novelist (Bullock) who gets kidnapped by a billionaire (Daniel Radcliffe) because something she wrote vaguely fit the description for a piece of treasure he’s trying to find, which triggers a rescue crew comprised of her publicist (Da’Vine Joy Randolph), her book’s cover model (Channing Tatum), and, yes, Brad Pitt. Bullock is single handedly making a case for why more studios should be making these movies still, with a performance that nostalgically recalls her rom-com prime, and Radcliffe can’t help but shine in his glossiest blockbuster picture since the boy who lived. Miscast as a city himbo with no survival skills, Channing Tatum’s own reputation precedes him; dumb enough to get a pass on screen but not dumb enough to offer the script any layups. It’s a shame the movie never fully commits to the fantasies of its romance-craven audience by making him a true brainless meat body (although he pops his shirt and pants off for long enough that I’m sure all is forgiven). 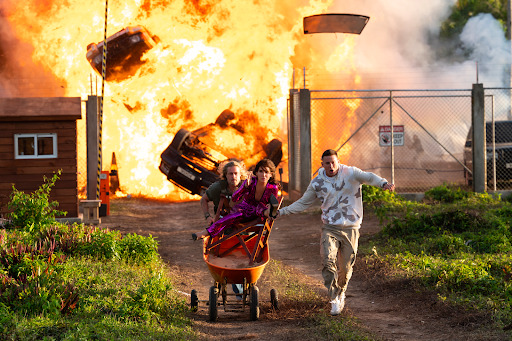 Seeing movie stars survive in the jungle for under two hours is about as Hollywood as it gets, and to that end the old-fashioned nature of the fundamental plot is at times novel enough to be refreshing. Yet, the uncanny nature of watching something this fundamentally removed from the zeitgeist only highlights how unfunny it can be in moments. The filmmakers know the jokes don’t need to be sharpened or focused because everything is so vapid and beautiful, so they let the actors’ blasé charm and banter sink or swim every comedic exchange. There is an entire side plot where we watch the publicist try to get from Los Angeles to the titular lost city, and it’s devoid of any entertainment value entirely—no stakes, no obstacles, no urgency, and no laughs.

I already tore into a similar film last year, BARB AND STAR GO TO VISTA DEL MAR. I can’t fault people for just wanting to turn off their brains and enjoying Sandy running around the jungle in her sequined dress. But I can fault people for not demanding something better. I respect that THE LOST CITY isn’t attempting to be a meta commentary on the films that it clearly draws inspiration from, because god knows that’s 95% of studio pictures at this point, but sadly the earnestness of it just lands with a thud. I too want to remember a time when Matthew McConaughey, one of the great rom-com actors of his era, wasn’t running for political office. It’s 2022. It’s time to accept where we’re all at, and perhaps accept the death of the mid-budget rom-com.