DETECTIVE PIKACHU was shot on film. Don’t you forget it. Both Film Twitter and John Mathieson, director of photography for The Pokémon Company’s first foray into live-action pocket monster adventure, ensure that you never will, the former a whole lot more tongue-in-cheek than the beef-starved latter. The result of Warner Brothers and Legendary Entertainment Postmating their very own (very expensive) DEADPOOL clone, DETECTIVE PIKACHU comes 24 years after the arrival of cinema’s first entirely CG protagonist in Brad Silberling’s CASPER, a film that caused me to erupt into crying hysterics when my parents had to explain that the friendly ghost was not real. He was an image, a fictional character. “But why? He’s so nice,” I pleaded and yelped in between tears, as I got my first salty taste of cinema’s inherent artifice. That was just one (1) friendly ghost: despite the film’s numerous shortcomings, I cannot imagine the power that DETECTIVE PIKACHU will have over the legions of children who must reckon that not only is the realistically animated Pikachu not real, but neither are the 50+ other cuddly and personable Pokémon roaming the purple-light-soaked streets of Ryme City.

Tantamount of the shortcomings is one of the worst miscasts in recent memory. Get Ryan Reynolds’ voice out of that yellow rabbit this instant. When tasked with casting one of the cutest characters in all of media, the organic choice is to go in one of two directions: sweetly headstrong or the gruffest of the grizzled. Pom Klementieff, Danny DeVito, or bust. What you don’t do is plop in a 42-year-old whose claim to fame is that you can see him as a 28-32-year-old. If you want to get technical about it, then we can discuss how Reynolds’ entire cadence relies on wide-mouthed gabbing that’s not at all synced up with the CG Pikachu’s limited jaw movement. Bless Justice Smith, playing convincingly against thin air, but cursed with the charmless archetype of “straight man responding to [genre],” with a bulk of his dialogue merely naming what is in front of him, but at least he talks less than the nonstop Reynolds. The whole movie is a gorgeously rendered computer animation God dream, even if the hairless Pokémon are unnerving, but Reynolds’ single-toned rambling coming out of that furball’s mouth feels more like a Funny Or Die edit than the emotional propulsion of a major motion picture. 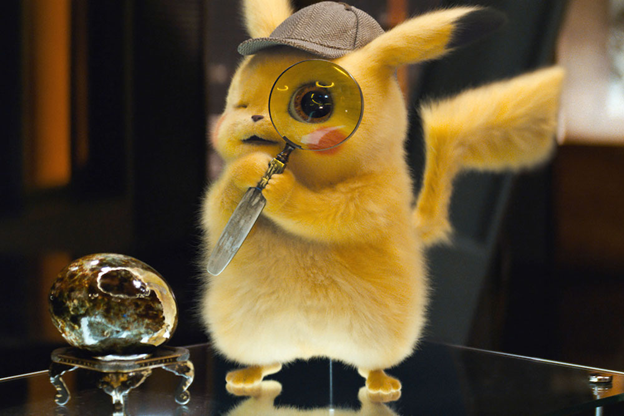 We need a priest, there’s a bearded demon in the rat

From BLADE RUNNER to Spielberg’s A.I., the influences are a-plenty and apparent, but director Rob Letterman struggles to capitalize on these properties beyond aesthetic. Bob Hoskins’ Eddie stumbles headfirst into Roger’s rabbit hole only after he’s suffocated by the incessant, desperate pleading of an endangered Lepus with no other options. Pikachu plays the Roger Rabbit role, the inciting incident personified as a furry cartoon who pokes and prods at his human cohort’s refusal of the call to action, yet whenever the duo investigates a crime scene, the detective only snarks and jeers. Roger Rabbit is both the comic relief and complete forward momentum to his movie’s plot; DETECTIVE PIKACHU has a Pikachu problem. The critter just doesn’t care about the mystery he needs to solve, offering nothing but snarky riffs while his human cohort, whose entire character arc is based in him not wanting to do any detective work either, does most of the deducing. You kind of want to see Detective Pikachu be a detective; among the obvious DEADPOOL similarities is DETECTIVE PIKACHU’s calamitous misinterpretation of self-reflexivity. Instead of watching the character try and fail, this character does not try, makes a comment about the wacky circumstances they’ve found themselves in, and then fails. The set-up is already weaker than the PG-friendly punchline, snappy segments that’d be knocked out of the park in the hands of Lord & Miller instead lasting a loading-screen-eternity when Pikachu and Human (I truly have forgotten this non-character’s name) hop along the mystery like a luddite trying to figure out a level-select screen. The central mystery is torn at the seams by the multiple movies this is trying to be: Reynolds is in parody mode, meanwhile Justice Smith is crumbling from scene to scene over the grief of his murdered father. Letterman chooses easy spectacle by showering every frame with oodles of background monsters, with most of the fan-favorites relegated to solely the background while newer generations nab starring roles. What is a Greninja? What is *checks notes* an Aipom? Nah, sorry, that ain’t a Pokémon, that’s a purple monkey, punk. What I will accept, however, is Bill Nighy saying the word “Mewtwo” and Mr. Mime’s graphic death by gasoline fire. 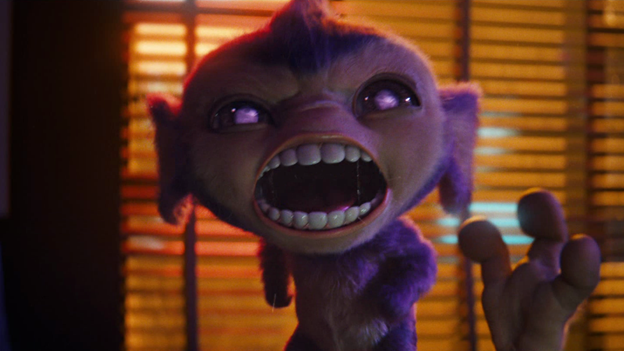 There’s no way this purple chipmunk is canon

Henry Jackman’s score, his centerpiece being a brightly optimistic arrangement of synth bells and brass entitled “Ryme City,” comes close to skyrocketing the entirety of DETECTIVE PIKACHU into a realm of wonderment, with “Ryme City” and its building crescendoes emulating the experience of playing Pokémon on a Game Boy for the first time and it challenging you with its exploratory premise: catch ‘em all. This brand recognition lies at the heart of what makes The Pokémon Company’s feature tick. Not to spoil the truly unusual and transcendental third act of this film, one that seemingly rewrites the franchise’s lore and further rips the agency from these battle-born beast slaves (the simultaneously fun and disturbing subtext of the Pokémon games promoting barbaric ruralism will re-contextualize your childhood), DETECTIVE PIKACHU sees video game branding merging consciousness with the user to form a singular coalition of unflappable fandom and the eradication of free-will humanity, a concept the movie both lambastes and subliminally commemorates. Pokémon are your parents! Free will is the complete control over one’s own actions, but wouldn’t you rather practice it with a Psyduck (all rights reserved) by your side?