THE UPSIDE may be based on a true story—whether that story includes elements of vicious gay panic, gags about quadriplegic erect penises, and a standard-issue romance plot, escapes my knowledge. It’s true mediocrity, punctuated by scenes of genuine understanding and surprising realism. That doesn’t excuse the two-hour runtime or the blandness of the performances and the milquetoast excuse for a script.

The film opens with a pointless flashback, as a modern Hollywood picture is wont to do, introducing us to stuffy billionaire quadriplegic Bryan Cranston and a parolee played by the most reliably unfunny performer in recent years, Kevin Hart. We become enticed and transfixed on the relationship as Hart cares for Cranston, forcing him to acknowledge just how beautiful life is (even though he’s paralyzed!) Or so director Neil Burger would like to think. Attention is paid to Hart’s degenerating relationship with his son and girlfriend—the film never shades in these two characters, leaving us wondering why he sacrifices paycheck after paycheck for his estranged family. Hart himself is equally vague, with Burger accentuating Hart’s “white people are wack” routine in the hopes of landing a funny bit. Unfortunately, there’s no funny business to be found in the script—unless you count the borderline-offensive gags about erect penises and catheters. Cranston is swerving so hard on autopilot, you can actually notice him visibly bored in most scenes, rolling his eyes and lifting his eyebrows upward half-heartedly like a perpetually amused cruller. 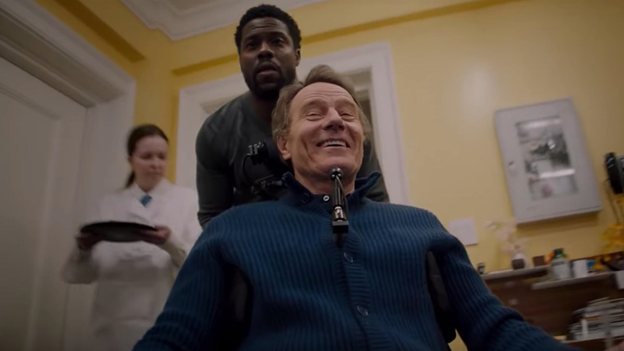 Don’t be fooled—Cranston is slowly dying inside

The film makes no effort to invest dimensionality into these two characters, leaving the bulk of the work to an exhausted Nicole Kidman, who—bless her—is doing her damndest to imbue the film with something approaching heart. A mighty suspension of disbelief is in order, as Hart is supremely unqualified for the position of life auxiliary, displaying numerous times his severe incompetence and life-endangering nonchalance—all while Kidman stands in the corner, shaking her head in quiet disapproval. The film’s female characters are basically non-entities, relegated to figurines to advance the plot or act as foils for our two heroes—particularly troubling is the film’s blatant ogling of a female PT, attempting to pass off the sexism as viewed through the lens of Hart. This technique only works when there is a clearly identified protagonist a la THE WOLF OF WALL STREET, where the misogyny is clearly derived from Belfort’s own prejudices—since there is no clear protagonist in THE UPSIDE, we’re forced to wonder whether this blatant chauvinism is intentional or not.

THE UPSIDE is host to some marvelously uninspired improv, courtesy of Hart—an extended riff where he talks about a new app he plans on developing is so cringeworthy it borders on performance art. When he’s not spewing word vomit in hopes of landing a punchline, he’s telling literal knock knock jokes (I’m not kidding, this actually happens), or getting Cranston high (apparently we’re still in the era where an old guy or otherwise unassuming non-weed-smoker being obnoxiously high is intrinsically funny). Burger, responsible for DIVERGENT, among other subpar entries, veers from vulgar slapstick to moments of emotional catharsis like a manic six-year-old, unable to stick the landing with either. Burger isn’t interested in examining the trauma that comes with the subject matter nor does he even grasp the metaphor here—namely that paralysis of the body results in emotional and psychic paralysis. The pieces are there, but Burger can’t make sense of them, fumbling through basic expository scenes with redundant push-ins and condescending comic antics. 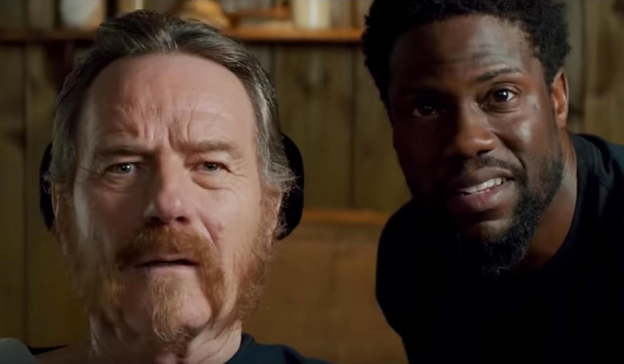 “I’m dying inside and you’re not helping”

“How about a knock knock joke?”

There is, actually, a good scene here—when Cranston meets with a pen pal, his cautious optimism devolving into major depression, as the date goes on. It’s an acute, if not exactly subtle, rendition of OCD and credit is due to Burger for not shouting this reveal at us through a line of dialogue. In that scene, one is reminded of the horrors of paralysis: the inability to connect, on the most basic levels, the felt humiliation of having someone spoon-feed you. True, THE UPSIDE is better when it’s strictly dramatics. You could almost not fault it for lack of trying if Burger wasn’t trying so hard.

Finally at the End of the Tunnel, ASSUME FORM Finds James Blake Embracing the Light

On WHY HASN’T EVERYTHING ALREADY DISAPPEARED? Deerhunter Find Themselves Begrudgingly Going Pop (And It Works)