CHILD’S PLAY 2 is one of the best films ever made. It’s an objective truth—what other ‘90s camp classic probes America’s ineffectual foster care system, post-traumatic stress, and personable brand synchronicity with susceptible consumers seeking mental asylum in columns of identical labels? CHILD’S PLAY has a reputation as schlock, with serial killer-turned-plastic plaything Chucky always teetering between A and B-tier slasher villain, but the Twilight Zone-friendly premise of the series has always been ripe for the late capitalist mystery floating over Lars Klevberg’s remake.

Rebooting the franchise amidst a very recent, successful string of straight-to-video sequels is a bit of a classless move; the series hasn’t fizzled out. Chucky may not be prevalent in the cultural conscience, but his movies are still bountifully catering to the fan base. In a Stranger Things-obsessed landscape, however, of course cult niches aren’t enough, these properties need to be flattened out and generalized for all once more, but Klevberg’s rendition of killer doll running amok is able to sidestep most nostalgia pitfalls and twist the source material for an obvious, albeit sinisterly clever modern retelling. 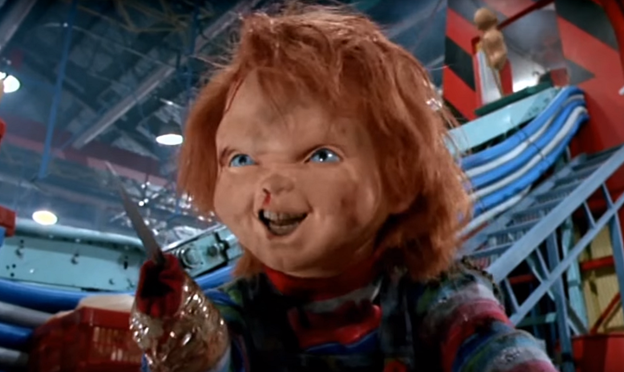 Downside of cutting out the voodoo is that now Chucky can’t rip off his gory, sinewy, mangled hand and replace it with a knife

TOY STORY 4’s Forky’s withering run as Film Twitter mascot of the month is defined by an adoration for the children’s film’s existentialist ideals that have long quietly, and more skillfully, been explored in that franchise, but where Toy Story lets up on the cynicism to allow Randy Newman to trill crooners, CHILD’S PLAY makes bold strides with Woody’s half-baked search for purpose by following a technological commodity influenced to unethical extremes by the nature of its masters. Corporations anthropomorphizing themselves into meme Twitters, social activists, and dutiful house servants that stop short of uttering “I love you” is a dystopian future that’s become our present—CHILD’S PLAY goes one step beyond, forgoing a voodoo possession ritual for a toy to go aggro, instead placing the blame on built-in features of the toy itself.

The incensed Vietnamese sweatshop worker doesn’t reset the Buddi doll’s programming from “Protect” to “Kill,” he simply deactivates the safeguards and lets it loose into the world. Like how Facebook purposely limits the powers of its mortifying A.I. tracking systems, homicidal Buddi bots are sort of inherent to the blueprint. For it to go haywire, all it needs to do is indulge in human pleasures; in the case of another mega-brand being put in the hands of a genre geek, that pleasure is Hooper’s TEXAS CHAINSAW MASSACRE 2.

Being a summer horror release, there’s regrettably little room to explore the implications of a constantly-learning A.I. paired with a child yearning for meaningful partnership and finding it in a luxury toy, CHILD’S PLAY really only cutting as deep as TERMINATOR 2 did with the same concept, but the Romero-adjacent seeds here are fruitful, if a bit toothless in ultimate execution. It’s too bad that CHILD’S PLAY wants to be SCREAM: Chucky is a perfect, heightened harbinger of tech isolation and blue-light angst. Yes, he may have scalped, skinned, and decapitated a father of twins, both too face-deep in tablets and ears cupped by headphones to notice that their dad’s shins just burst through his skin a few feet away, but I feel bad when Andy stuffs Chucky in the closet as punishment the next morning. 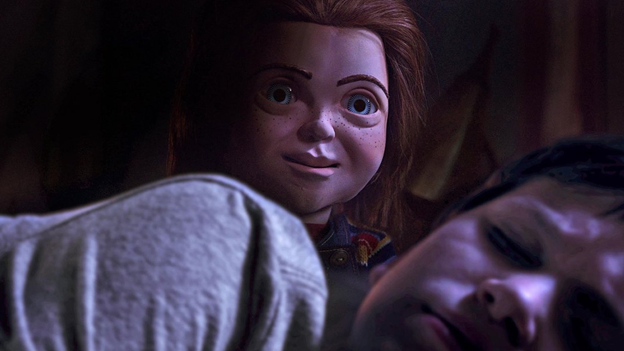 Much like how Chucky goes to Hell because of the horrid people around him, the actual humans of CHILD’S PLAY threaten to sink it every step of the way. While Chucky’s goofy MAC & ME-reminiscent growth from blank unit to emotive psychopath is equally A.I: ARTIFICIAL INTELLIGENCE tender and 2001: A SPACE ODYSSEY hair-raising, thanks to Mark Hamill delivering such stellar voice work that I may consider this rendition of Chucky my absolute favorite, Gabriel Bateman’s turn as Andy is fraught with needlessly cavalier smarminess.

Tyler Burton Smith’s screenplay is intent on playing the reboot for straight comedy, a tone-murdering miscalculation that Klevberg either failed to course correct or foolishly thought was working—there’s an excuse for Mark Hamill’s intentional stiltedness as an automaton, but to see how poorly the jokes land mid-filming and double down on them? Insanity. At one point, Chucky kills a white man in his backyard, where there conveniently lies a homegrown watermelon patch, screaming “This is for Tupac,” a weird payoff to an already clunky set-up minutes earlier where the neighborhood kids are teaching the doll phrases. 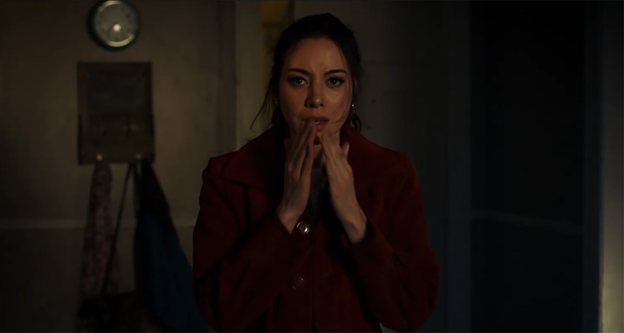 Me: Casting Aubrey Plaza as a mother already is illegal.

Also Me: HOLD UP, AUBREY PLAZA IS HOW OLD??

Brian Tyree Henry, here paying his mortgage as a Chicago detective, approaches the grisly crime scene and says “White man dead in a watermelon patch. Poetic,” a line which may very well be one of the least poetic ever written. Dramatic beats and plot progression feel stapled together, often a result of the crammed-in comedy, and it serves to the detriment of Chucky’s arc—when he starts violently messing with Andy, it feels out of character. As invigorating as the broad Amazon critiques are, CHILD’S PLAY is victim to forcing a remake rather than staging an adaptation. The movie is a trim, refreshing 90 minutes, but there’s a lion’s share of comedic bombs begging to be sliced out for an even better, possibly poignant 80-minute affair.

In many ways, CHILD’S PLAY is a case of lost opportunities, but its victories are too triumphant to discount. Bear McCreary’s incredible score playfully preys on the childlike melodies of “You Are My Sunshine,” the kills are over-the-top, gruesome, GREMLINS-styled fun, and any movie opening with that grainy Orion Pictures logo will rev my engines. Everyone has their hackneyed Black Mirror take on technology’s influence today, and while CHILD’S PLAY can play the same “These screens are evil, man!” fiddle, the statements embedded into the very design of the piece speak volumes. One of the best parts of CHILD’S PLAY is how jank the new Chucky looks, trotting with the unsettling uncanniness of the Boston Dynamics robots. We live in a “revolutionary” tech boom, but hyper-tunnels underneath New York City turn out to be moleman holes dug out by vaping, vapid billionaires and a search result churns out after eight overly-enunciated “Hey, Siri”s.