I first heard about THEY SHALL NOT GROW OLD from a random Reddit post. Marketing was fairly limited for this, and I mostly heard things like the film was “astonishing” and “unlike anything people have seen before.” Both sounded like what most sketchy reviewers call your average summer blockbuster. But it would be quite the understatement to call this a departure for a director the likes of Peter Jackson, and probably a good thing at that—I’ll allow everyone to take a moment and shed a single tear for The Hobbit trilogy. Many theories about his past few project’s shortcomings can be distilled down to Jackson never quite finding the same love affair that he had with Lord of the Rings. I’ve always been a huge fan of history, and Peter Jackson, and films. So naturally I was incredibly excited to see this, but more so to see something Jackson finally poured his passion into again. Fortunately so, THEY SHALL NOT GROW OLD stands as a pure, innovative love letter to those who fought in WWI, and an amazingly clear lens into a dark chapter in our history.

Over the course of five years, Jackson and his team utilized advanced colorization techniques, audio dubbing, and sound effects for the purposes of modernizing old archived World War I footage. Scratches and artifacts were removed from the old film, framerate was standardized, and lip readers processed what formerly silent soldiers said on the battlefield. Jackson’s team found actors with the correct regional dialect to voice over the soldiers based on the patches from their uniforms. His knowledge of these patches is partially due to the massive collections of World War I memorabilia that he owns. This collection of artifacts also helped as a reference in the colorization process of weapons and uniforms. Need an artillery cannon? Just wheel one out from, what I assume, is a giant Indiana Jones-esque warehouse full of crates. I couldn’t help but smile knowing the last time I saw Jackson’s nearly maniacal attention to detail was from the behind the scenes of The Lord of the Rings. 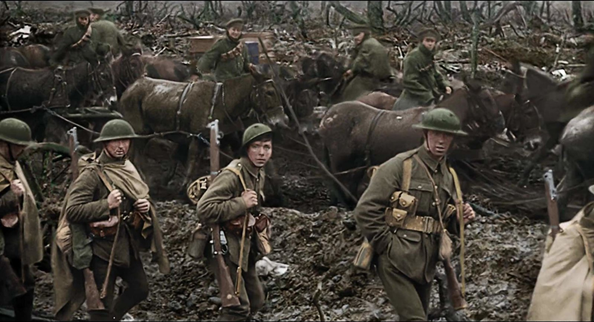 Despite the insane interest in the subject matter, this methodical process seems to mostly come from a personal dedication to his grandfather, a veteran of the war. Jackson mentioned in various interviews that his main goal was to show what a typical British soldier underwent on the western front. Experiences were sometimes funny, with talk of pranks and field games, sometimes boring, sleeping and waiting for weeks on end, but sometimes horrific, with artillery shells raining down for weeks straight and frozen muck destroying frostbitten toes. In color and sound, shells have never felt more real, and pictures of decaying feet never looked so tragic. At times I found myself forgetting that I was watching real people over a hundred years ago, and I find that equally impressive and shocking.

Before even starting colorization and audio dubbing, Jackson’s team spent most of the post-production process sorting through BBC interviews of World War I survivors. The survivors’ stories were then spliced together in order to provide further authenticity. Interestingly enough, and maybe it’s due to British stoicism, but most stories were positive and nostalgic of the war. In so many words, one survivor compared war to that of “camping with a hint of danger to spice things up.” Only in rare circumstances does the film get dark in its narration, and proves a fascinating look into how memory deals with trauma. In some of the more humanizing moments, British soldiers talk about how both Germans and British got along as prisoners, often talking about peace over a “spot of tea.”

Authenticity is a funny word when applied to this film, since Jackson’s team is altering the film to their perceived reality of the conflict. Some historians have likened his work to coloring in the outlines of cave paintings. But Jackson’s work has done this so believably and lovingly, that it pales in comparison to the platform these stories have been given. I see Jackson less of an opportunist, and more of a realist. Who is going to pay to watch 90 minutes of grainy black and white footage? Have there not already been countless documentaries on this subject? Jackson never claims to be a historian here, and it’s clear that the film honors the material. I’d argue that Jackson wiped away the cave wall and revealed an elaborate, multi-colored mural underneath. 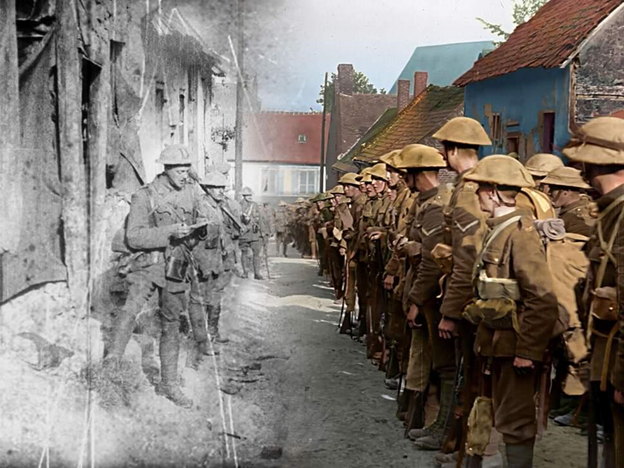 Shown above: as close as I could get to showing a cave wall being wiped away

Taken from a poem written by Laurence Binyon after the first World War, the film’s titular phrase is meant to memorialize those who died in the conflict. It’s sad, of course, but it takes on another meaning through this film’s purpose. No matter Jackson’s intentions, whether through some grand memorial to the conflict, or a more personal meditation on his grandfather’s story, through modern technology, Jackson has saved and humanized the eternal, youthful state of those who fought and would have otherwise been lost to time. Yes, they shall not grow old, and because of Jackson and his team, neither will their stories.

The film was given a limited release in theaters on December 17th and 27th. After October, Warner Bros. announced an expanded theatrical run for THEY SHALL NOT GROW OLD, beginning in New York, Los Angeles, and Washington D.C. on January 21, with an even wider release to follow. Make sure to catch this in theatres during this limited window.