The mantra “everyone is equal now” flashes behind male models as they flaunt the season’s hottest designer clothes: TRIANGLE OF SADNESS opens by satirizing the advertising industry’s hypocritical woke pandering. One of those models is Carl (Harris Dickinson, of BEACH RATS), a male feminist who argues with his girlfriend Yaya (Charlbi Dean, taken from us much too soon) over who should be paying for dinner. Should the man always pay, or should the top earner in the relationship foot the bill, regardless of gender? Is the money even the point?

The squabbling, but always Instagram-ready couple are our entry point into the luxury cruise only referred to as “The Yacht.” Over fine dining, they quickly are introduced to an eccentric cast of characters, in the way that old, ungodly rich white people are eccentric. There’s Dimitry (Zlatko Burić), the self described capitalist shit-seller. “Aren’t you going to eat that?” he asks Yaya as Carl snaps photos of her sexily dangling pasta in front of her face. “Oh no, I have a gluten intolerance,” she replies matter of factly. There’s Clementine (Amanda Walker) and Winston (Oliver Ford Davies), a British arms dealing couple who bemoan new UN regulations getting in the way of business, there’s lonely bachelor Jorma (Henrik Dorsin), and who can forget the alcoholic American captain of the ship Thomas Smith (Woody Harrelson, always a treat), who quotes Marx often. 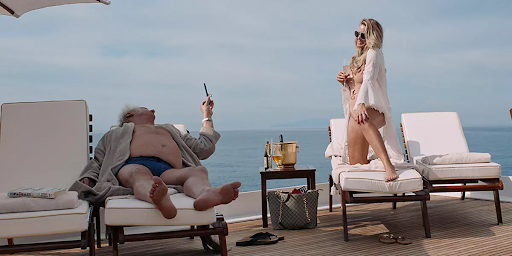 Although The Yacht’s voyage starts out as every influencer’s #dream #goals, it rapidly descends into a masterfully hilarious display of bodily horrors. Picture the Titanic going down, but with a hell of a lot more wet shit, projectile vomit, and drunken economic debates. Without spoiling too much, as I firmly believe you should go into this film knowing as little as possible, the eventual demise of The Yacht leads to a small group of guests and crew members becoming marooned together. As any fan of SURVIVOR fundamentally understands, the desert island is the ideal setting for director Ruben Östlund to study the characters as they reveal their spiritual and physical shortcomings, their selfish human desires, and of course, their socioeconomic differences. Using their different strengths, rich and poor must manipulate each other in new and cruel ways to survive.

TRIANGLE OF SADNESS deserves PARASITE levels of hype due to its hilariously human approach to political messaging, as well as its unwavering ability to shift into something completely new within each scene and with each overarching act turn. Right when you think you’ve figured out what Östlund is trying to do, he discovers another facet of human nature to dissect, plunging deeper into the disgusting nightmare that is the world of the one percent. Östlund’s scathing political critique goes further than simply pointing out the upstairs/downstairs dynamic between passengers and crew; the layers quite literally go deeper when the all white wait staff loudly stamp their feet in celebration, disturbing the all brown cleaning staff members who reside below. All animals may be equal, but some are more equal than others, as the saying goes. 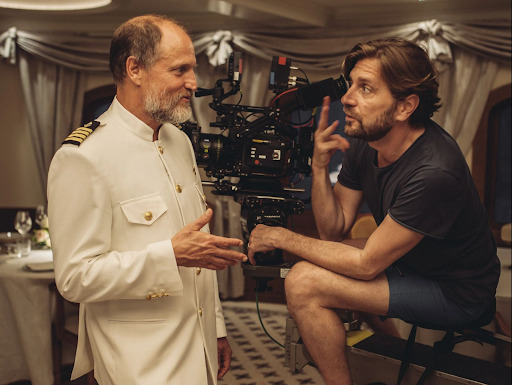 Can these ultra rich snakes change into actual human beings with souls? Even after every earthly possession is stripped from them, Östlund answers this question with a resounding “no.” Once obscene wealth has tainted the soul, there’s no going back. The ethos of TRIANGLE OF SADNESS is not “people are morally corrupt at their cores,” but rather “rich people are morally corrupt at their cores.” This does not mean that Östlund falls into the trap of valorizing the lower class characters to the point of perfect sainthood—rather, greed is what poisons the soul, whether that’s greed for money, power, or sex.

In the movies and in life, poor people want to be rich, and rich people want to be richer; the “want” is ingrained into the very fabric of visual storytelling, and into human nature. Rugged capitalists have exploited this aspect since the dawn of civilization when they realized they could make profits from human desire and suffering. Östlund exposes the rotting of the human soul when that “want” becomes greed through the repeated humor of the film—the rich have zero ability to see anyone else as human, yet hold endless wells of empathy for their own personal situations. In one scene, a man cries over his wife’s corpse, and then robs her of the jewels on her fingers and neck. To wealthier viewers, TRIANGLE OF SADNESS may come off as too “on the nose” or “like shooting fish in a barrel,” as I heard the guy next to me say, but as a waitress myself, the repeated humor wasn’t tired—it was cathartic. It’s about time the rich are the butt of the joke when they use the poor as their toys. As inflation and corporate greed hike living costs up to new heights while wages are smothered with no relief in sight, dark comedies like TRIANGLE OF SADNESS come as a comfort.