It’s a wild coincidence that the Parkland shooter dodged the death sentence the same week Blumhouse’s HALLOWEEN boys made a movie about him. The discourse was quiet and briefer than one might expect—perhaps due to the commodifying conveyor belt of current events as content, perhaps because we’ve held this debate a few hundred million times throughout world history. Still, many, including the teenagers making out to HALLOWEEN ENDS while it streamed on Peacock* in the background, were forced to seriously reconsider capital punishment. There are abolitionists who believe the American carceral state is abundantly inhumane torture, Evangelical Christians who’ve lost the plot and yearn for rivers of blood, and the victims’ families who’ve an array of grieving devices before them and likely hold onto sensible ideals, but like many affected by gun violence, have had their babies murdered and understandably want 15 primal minutes alone in a shop class workshop with the sniveling rat who held down the trigger. To the point: How do we live with such senseless violence? The Western model is to ignore it, lest we truly point fingers at the granular sources. And so HALLOWEEN ENDS follows suit, a colossal stinker of a finale that drops all precedence of sending up an American culture of carnage and instead blind-fires Twitter therapist buzzwords like it was an Oberlin student trying to get head.

*Ok, I know, I’m stretching credulity with this point: no one’s paying for Peacock

Make no mistake: the HALLOWEEN franchise sucks. Not a single soul beyond John Carpenter and Tommy Lee Wallace has ever made a good installment, and I have positively zero clue why the series’ reputation has been retconned into some heralded horror legacy when it’s always been shelf-filling, Dimension Films cash flow for future Miramax flops and direct residual deposits into retired Johnny’s personal Playstation fund. Though expectations ran high for a direct sequel series to one of the five greatest horror films ever made, there was no denying that we all knew why we were here… And it’s definitely not for the fabricated event concept of “Laurie vs. Michael.” No one’s favorite part of an ‘80s slasher is the final fight. So if audiences don’t seem to care, and John Carpenter vocally does not care, then why does HALLOWEEN ENDS abide by an imagined honorific rubric of required beats and Easter eggs? You can do anything you want! Why the fuck is everyone here creating cultural stakes out of thin air? 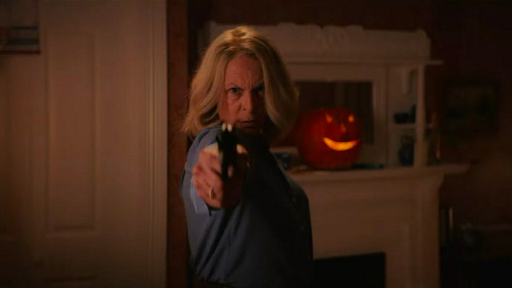 To be fair to the creative team, it was HALLOWEEN KILLS that was the trashy throwback, and I’m shocked they didn’t capitalize on it for one movie more. It was their first of this sequel package, where Green and McBride quadrupled down on HALLOWEEN II’s Ben Tramer death scene by making the furiously inept mobs of Haddonfield so scared of Michael Myers that the common horror complaint of “no one’s using any common sense!” suddenly became core text. Its climax sees an elderly Michael go on a grisly kill montage in a stylized, blacked-out void… Nary do we ever get the entree of one of these movies served so cleanly and obviously. And you ungrateful dipshits had the nerve to call the most fun movie in the garbage franchise “trash,” it just blows my mind. Everyone’s rabid about ‘80s horror until some North Carolina motherfuckers actually go and make ‘80s horror in the 2020s. It was a drastic departure from 2018’s HALLOWEEN, an ode to anti-reconciliation that arrived at the peak of elevated horror’s unquestioned supremacy, and one could posit that this nu-HALLOWEEN series was always aiming to take big distinctive swings from installment to installment.

So what are these “big swings” that HALLOWEEN ENDS makes?

Well, they just RIVERDALE’d the Jamie storyline (a relic from the ill-fated THE RETURN OF/THE REVENGE OF/THE CURSE OF MICHAEL MYERS trilogy, otherwise referred to and struck from the canon in 2018’s HALLOWEEN as “a bit that some people made up to make them feel better”) and gender-swapped the kid to “Corey” because it also conveniently rhymes with “Arnie.”

Then to default from a slasher to a romantic character piece where the performances and writing are fighting tooth-and-nail to out-mid each other? Who’s this for? There’s a deadened glaze over Andi Matichak’s eyes even as she enters a supposedly life-affirming affair with someone who interchangeably entices and repels her: she’s proven herself to be a charming scream queen, but the aimless script sands down her perverse affection until it’s a YA romance adaptation of CHRISTINE, a story that only works because of its melancholy and scorn for classical masculinity. And Rohan Campbell might be a good actor? I have no clue, it’s always tough to tell when first-timers recite a screenplay with zero ambitions. It’s a passable performance for a bit-part, but as the primary focus of the motion picture? Huh? A star is sadly not born here, and it’s even weirder to use the franchise that minted Jamie Lee Curtis to not go all in on Matichak. Or, honestly, Jamie Lee Curtis: she’s given some gruelingly earnest, human dialogue that couldn’t feel more alien. 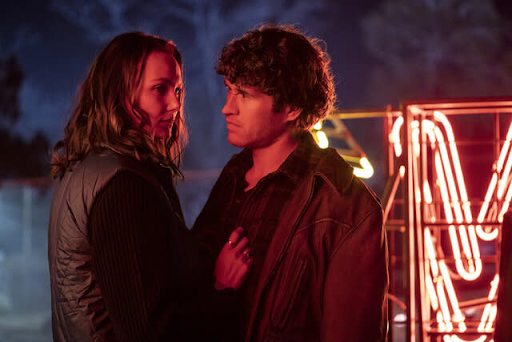 What HALLOWEEN ENDS chooses to ramble on about the communal impact of folkloric violence is radically less interesting than the thin tightrope it could’ve walked exploring Allison’s instinctual attraction to her generational abuser. Usually “here’s how I would’ve fixed the movie” is a lazy base for critique, but is this even that if I’m just following the emotional throughline of a trilogy? A story at its heart about a woman’s victim complex being fostered sociologically and psychologically is so direly underwritten that the end product has you watch a 28-year-old teenager get ran through some other dude’s retread of SPIDER-MAN 3’s symbiote subplot. In a series predicated on the juxtaposition between repressed feminine rage and reactionary bloodlust, it’s a peculiar proposal to end the series with a backgrounding of both surviving female characters to focus on a loser who’d need less than Michael Myers mind-melding with him in a sewer to act on his intrusive thoughts. Is he Frankenstein’s monster or is he Elliot Rodger? Carpenter’s HALLOWEEN is as much a classic about babysitters getting murdered as it is a dispassionately objective perspective on a stoic incel’s sexual liberation, doomed to penetrate in response to intimacy out of his literal grasp; the voyeur mechanically obliterating virile teen broads deemed unobtainable by the evil possessing him. There’s fertile ground that hasn’t been taken advantage of for over 40 years, and yet Green waddles on a middle path. He wants us to believe he’s burning down the institution, but it’s as disruptive as tossing firecrackers in a parking lot.

My admiration for sneaking eccentricities into major studio pictures dwindles exponentially as it’s proven that these filmmakers-for-hire seemingly haven’t the slightest passion for sneaking in compelling craft. I’m all for sieging the castle gates of profitable intellectual property, and causing so much of a ruckus before the executives can muster up any money to fix what you’ve done, but that charity is not reserved for a seminal franchise stewarded by Jason Blum. There’s no worth in sifting through HALLOWEEN ENDS’ lame dissertations on love and violent catharsis, all underthunk and panic-written through pandemic deadlines and imagined pressure. Let it rot in streaming purgatory on a bed of roses picked by scavengers of mediocrity who’d call an episode of YOUNG SHELDON a “misunderstood classic” so long as it contained a singular genre element and made “weird choices.”