Surfing the wave of last year’s Time’s Up movement, the 2018 Student Academy Awards feature a batch of outstandingly diverse directors and stories. With four of its eight nominated films shot outside of the United States (from mainland China to Haiti), the ripple effect of championing diversity and acknowledging minority voices in Hollywood can be felt all the way to this year’s recognition of young talent. That isn’t to say that the Student Academy Awards haven’t always been rather diverse (just look at our roundup from last year), but the expressly political nature of this year’s batch proves that fighting for social justice is the current state of mind—and for good reason! With this series, Merry-Go-Round will be highlighting all eight films nominated in the Live Action – Domestic category.

The last time the University of Texas at Austin took home a Student Academy Award was in 2013 for Brian Schwarz’s gold-winning short film, OL’ DADDY. But that isn’t to say that the school ever lost any steam. In fact, UT Austin films have done rather well on the festival circuit, allowing the school to build a reputation as one of the foremost cinematic learning institutions outside of California and New York. With JUNE, director Huay-Bing Law brings further acclaim to his school, and not only because of his recognition from the academy: the film also earned an HBO APA Visionary Award. Following the story of an Asian immigrant couple in 1950s Texas, JUNE is an earnest glimpse into a side of segregation that has oft remained unspoken: that of the Asian-American experience. In an email interview, Law was able to sit down and answer our questions about the conception of his film and his aspirations as a filmmaker.

How did the story for JUNE come to you?

It was based off of a family story that an Uncle had once told me about his mom’s experience immigrating to America in the 1950s. Their first day there they came across these segregated restrooms and didn’t know what to make of it.

How does your cultural background inform the storytelling in JUNE? Could you explain to the reader where your family is from and how it may have brought you to this story, specifically such a feminine one?

Both of my parents were born and raised in Taiwan. They moved to Texas in the late 1970s and I was born in Houston in the mid ‘80s. When I first heard of the story it made me think of my mother. And how it reminded me of the stories she told me of how difficult it was for her to fit in––socially and professionally. So a lot of the main character is based off her personality and her experiences.

Was JUNE a thesis film? Can you talk a little bit about the thesis program at your school?

Yes, it was my MFA Thesis at the University of Texas at Austin. The production track is designed as a three-year program, where you typically come out of the program having directed four films. A short documentary and narrative the first year. Your pre-thesis the second year. And your thesis the final year. 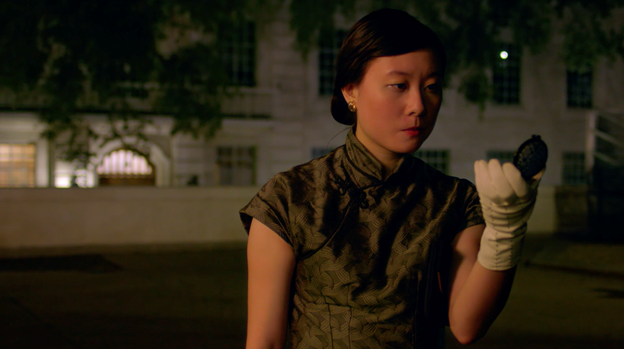 Was your crew composed of people from your school or did you find them from outside?

All of the crew came from the UT-Film and Austin film community.

What I really loved about JUNE was how much complexity it finds in its own simplicity. How did you help transport your actors back to this specific time period in order to mine all of these nuances?

I was lucky to have such a dedicated and amazing crew to help build the world. Notably Jessi Rose (costumes) and Megan Cisneros (make-up). We were very fortunate to have access to so many locations on a historic campus.

That brings me to my next question: So I think I’m right to assume you shot the film on your college campus. I actually really love that, because it’s one of the few student films I’ve seen that’s really embraced the potential of shooting on a historic campus. Can you talk a bit about this?

Yep! It was the UT-Austin campus. We were trying to take advantage of the access that we had, and luckily it lined up perfectly with where we wanted to go with the story. People always say to try to write with your resources in mind, particularly in low-budget filmmaking.

Where did you start when it came to shooting this film? Was it all in the casting for you?

Mmm… the script is where it all begins I think. It’s something that Kat [screenwriter Katherine Craft] and I had really dissected and tried to really explore––to figure out how best to tell this story in such a short time frame. Casting is when it starts to begin to come to life, and actually for me––the first rehearsal is usually when I start to get really excited.

Can you tell me a bit about the HBO award you were given recently?

It was the HBO APA Visionary Award, celebrating Asian-American short films and filmmakers. June was one of three winners this past year, so we were able to have our premiere screening at the DGA Theatre in LA, hosted by HBO and LAAPFF.  There was also a cash prize, our film gets to stream on online HBO platforms, along with additional screenings and publicity. Next year’s competition is officially up, and I recommend everyone take a look! 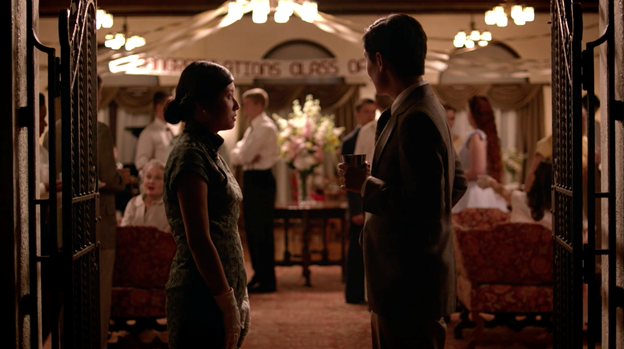 What do you think defines you as a filmmaker? Is JUNE indicative of a style of filmmaking you strive to be remembered by?

I think I’m very early in my career. I’d be lying if I say I know exactly what my style is as a filmmaker. Or how I would define myself as a director. But I do know there are so many stories that I’m excited to tell and each one will lead its own language. Maybe I’ll know in 10 years.

What were some of the stylistic references used for JUNE? Any directors or other films you were inspired by?

I looked at a lot of the old yearbooks from the University from the 1940s – 1950s, and stole a lot from those images. The costumes, the hair, the locations. I watched a handful of movies with the cinematographer, Sam Mohney, but none were really a direct influence for this film. We knew we just wanted to keep it simple.

What’s next for you?

I just wrapped on a feature film as DoP that was shooting in Saigon, Vietnam. And now I’m gearing up for teaching at the University of Texas at Austin and Texas State University, while developing my next project.

That’s awesome. Congratulations, and thanks for taking the time to talk about your film!

Catch JUNE on the festival circuit this year, and keep your eyes peeled for more of Huay-Bing’s work down the line!