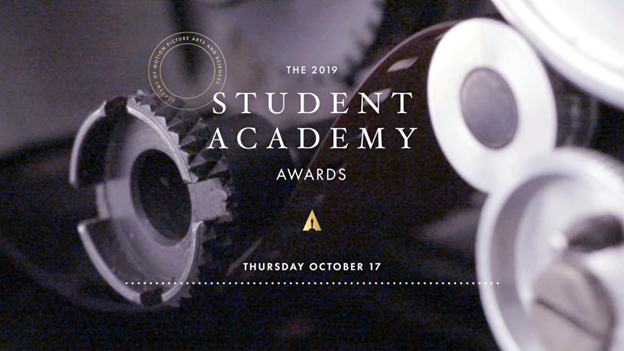 AFI hit the Student Academy Awards like a wrecking ball this year, racking up five out of the seven finalist slots in the Narrative – Domestic section. Among them is Hao Zheng’s THE CHEF, an astutely ambitious near-future portrayal of a strict chef who finds himself wrestling with the purpose of a newly employed android cook. Making the most of its student film budget, THE CHEF finds creative, out-of-the-box ways to depict its sci-fi setting without stooping to lazy exposition. The gorgeous photography and a brilliant performance by its human and android protagonists makes for a film showered in contrasting juxtapositions and a dramatic final act, begging the audience to ask themselves what to make of our looming future of automation.

So THE CHEF was your second of two thesis films. How come you were able to make two?

I got very lucky! My producer, Ithaca Deng, approached me and asked if we could make a second film. I didn’t know if it was allowed, but we decided to ask AFI and see if we could do it. That hard part was that AFI usually finances a little bit of the thesis films, but since this was considered an alternative project, we had to find the financing on our own. Luckily we won the Sloan foundation grant and received $25,000, which helped us make the film. My first thesis was more of a grounded drama, without sci-fi elements or anything, and so THE CHEF was quite different.

Was THE CHEF a story that the producer had and she approached you with?

She approached me with the concept. She wanted to make a sci-fi immigrant story. She’s also Chinese and so we brainstormed ideas together. We realized that we had a shared experience of food and family. Her grandfather used to cook her some specific braised pork dish, but she can’t recreate the same flavor when she cooks it herself. For me, my grandmother used to make these spinach noodles. I can buy them here in Koreatown, but the flavor isn’t the same. So we decided to use this as our subject. It’s a hard thing to match twice in a row.

Exactly, and that makes for a good contrast against technology. And so I had this fascinating little experience where I would pass this tiny hotel in Koreatown and saw this small robot. It was a very dumb machine: all it could say was “Welcome.” I didn’t think much of it at first. But a few days later I walked past the robot and saw this old man who was playing with a little radio, and kept changing the channel, thinking that somehow he had control of the robot. He laughed so heavily. And that moment moved me quite a lot. Who was this old man? Where is his family? Why does this robot mean so much to him? So that was the root of my story. 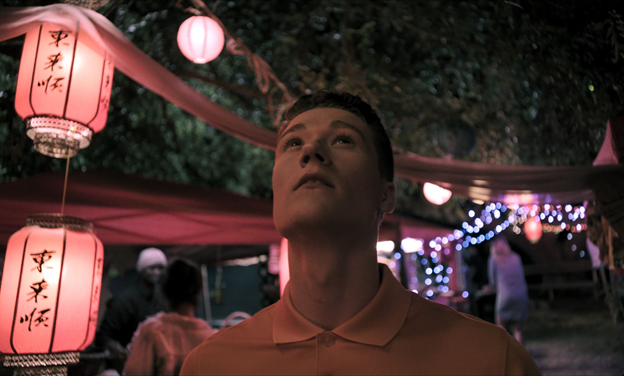 So you found a way to bring together these two different concepts of food and this interaction you witnessed on the street.

Yes, it all comes down to loneliness. Back when I was young, we would share food and stories with our neighbors. Today, I don’t even know who my neighbors are. And we like to blame technology for separating us. But then I thought to myself, “What if technology can provide us with a similar comfort? What if a robot can do what humans no longer do?”

What was the pre-production process like? How did you cast your android? He’s a great actor and looks distinctly different from all the other actors. He’s more sleek and less grungy than the other chefs.

Again, we got very lucky. First off, I wanted to cast a white guy for the role. I wanted to use this opportunity to make a white man a minority by putting him in this Asian kitchen and having him experience what we experience so regularly in real life. The actor we ended up casting was actually the first guy who came into the audition. He not only acted very well but was really smart with his wardrobe for the audition, wearing a very sleek, not-baggy uniform. But most of all, he had a charm to him. He really played a robot well, but you also wanted to be friends with him.

What about the other characters?

That was actually harder! Casting Asian characters in Los Angeles is really hard. During the casting process we were tweaking our script. American people obviously don’t know, but there are so many dialects and languages in China that it’s quite hard to find actors for just one language. We quickly realized we couldn’t only cast in Mandarin. Our lead chef character speaks Cantonese and speaks Mandarin with a Cantonese accent. So we decided to embrace that. After all, LA has all these people from all over the world. The apprentice character speaks Mandarin Chinese in a Taiwanese accent. We then did chemistry reads with each actor and that’s how we decided. We feel so grateful to have all these amazing actors willing to help us on this project. 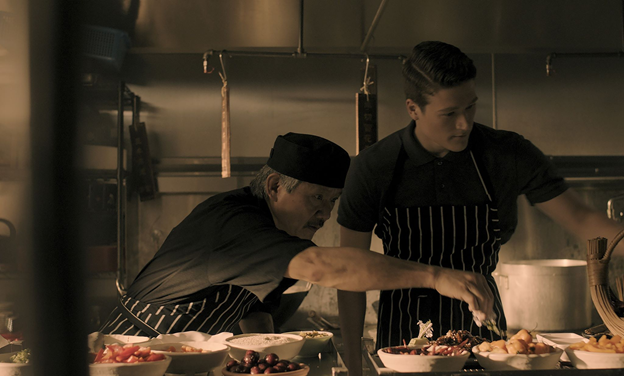 What was the process like with creating a near-future Los Angeles? It’s certainly futuristic, but not BLADE RUNNER future.

Well first off, we didn’t have the money. So it always starts with compromise. As we location scouted, we hadn’t won’t the Sloan foundation grant yet. We were very desperate and started to believe that we’d never have the money to make this film. We thought “Okay, forget about robots, forget about sci-fi.” But then, thanks to my writer Vanessa Kong for coming on with an amazing draft, we won the money and got back on track. For us, the most important thing is making it all feel real. My DP, Carlo Mendoze, was fantastic and has a lot of experience. In the script we had him and the production designer in these talks with us. One thing was to approach dystopia, but not go too dramatic. We had a few VFX elements, but everything was manageable. The shot of the protagonist watching the helicopter pass his apartment is my favorite moment in the film, because it really emphasizes his loneliness, but also helps share the world. In post, my editor Guangwei Du also had the idea of giving the robot unique sound effects, which helped sell the world.

Was your whole crew from AFI?

Where did you find your production designer?

She had worked on many AFI projects in the past but was not enrolled in the school. She also spoke fluent Mandarin and did a great job.

What did you want your audience to take away from the final shot in the film? You do this really great thing with your shutter speed (or something like that).

The last shot was all in reference to the line “Whose side are you really on?” It’s the idea that society always governs over you. It’s very hard to fight against society. So that’s why the camera tilts up in the tunnel and reveals the sky above—society is pushing down on him. It’s this pressure that’s above the character—beyond his control. We used a Step-Print method in that final moment, which is something that Wong Kar-wai uses a lot to separate the character from the world. It motion blurs a lot and separates the character from the world. The feeling slowly becomes like the protagonist is stuck in time. He doesn’t really have a choice.

Did you have any films you used as reference?

For this moment, it was the final shot (I think) of Wong Kar-wai’s FALLEN ANGELS. Otherwise, not really any references. A lot of people have asked me if I got inspiration from Ridley Scott, but I’m not familiar enough with his work to say I did.

Obviously you’re on the festival run with your film. Anything else brewing? What’s next for you?

THE CHEF is playing a lot of festivals this coming month. Unfortunately, I can’t attend all of them. But my team will attend those. I’m currently discussing a feature-film version of THE CHEF with production companies, both in China and the U.S. I don’t currently consider myself a writer-director. I love working with writers. So I’m also working on three different scripts with three different writers.

Amazing. Thank you for talking with me.

Catch THE CHEF at the festival circuit and keep your eyes peeled for more of Hao’s work in the future!