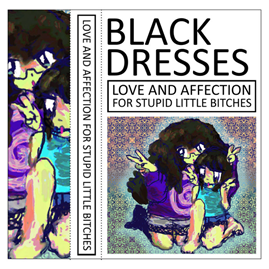 What a year it’s been to be Online as far as music is concerned! With the Gec takeover in full effect and hidden gems like Hot Leather’s BRAIN POISON treasure for those willing to go looking for it, now’s the perfect time to turn your ears towards our neighbors up north and Black Dresses, a striking, vulnerable, and beautifully terrifying team-up between Ada Rook and Devi McCallion. LOVE AND AFFECTION FOR STUPID LITTLE BITCHES is the third release from the duo this year alone and is their strongest musical outing thus far, Crystal Castles by way of the more electronic acts on Holy Roar. Though opener “STATIC,” which sounds like the Lingua Ignota/Flatlander team-up that never was, will be a bit of a litmus test, from there Black Dresses’ unique ability to combine soaring electropop with visceral blows of raw, brutally mixed emotion becomes all the more clear and evocative, most notably on album highlight “CARTOON NETWORK.” An uncompromising presentation of both impressive pop-hook craft and sharp, maximally overdriven bursts of noise and screams that would be comfortable on a grindcore release (and, in fact, are on Rook’s side project Crisis Sigil), I don’t think anyone else making music could include the electroclash nightmare of “DROOL” and the lazily stoned afternoon reverie of “MUSIC” on the same album, much less one after the other, and have both make perfect sense. But the thing I might appreciate most about LOVE AND AFFECTION… are the frank and unguarded lyrics, delving into the loneliness, helplessness, and confusion we all feel in a way that feels empathetic and relatable (“Every day I’m so fucking freaked out / Every day I can’t get the evil out / Every night I feel so far away / Someday, someday / Will it ever be OK?”). You’ll headbang, you’ll cry at the absolutely devastating tale of desperation and hope on album closer “MY HEART BEATS OUT OF TIME,” you’ll want to turn it up as loud as possible… what’s not to love? Give a listen to Black Dresses’ LOVE AND AFFECTION FOR STUPID LITTLE BITCHES over on Bandcamp. [Thomas Seraydarian] 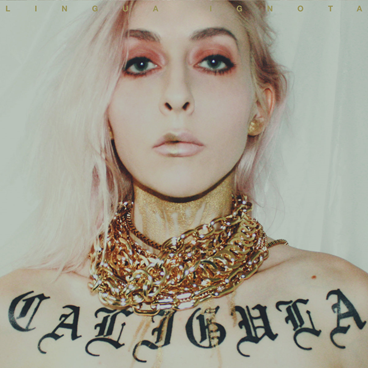 Favorite Tracks: “DO YOU DOUBT ME TRAITOR,” “BUTCHER OF THE WORLD,” “MAY FAILURE BE YOUR NOOSE,” “I AM THE BEAST”

There’s a seemingly impermeable barrier between the wide world of pleasant music and the more narrow world of intentionally abrasive noise. If you’re not in the habit of seeking out punishing music, it’s essentially impossible to articulate the appeal of putting your ears through hell, which is a shame, because brutal music can be so rewarding. No album better embodies the potential of experimental and boundary-pushing music than Lingua Ignota’s CALIGULA. A follow-up to her absolutely shocking self-released ALL BITCHES DIE in 2017, CALIGULA is a gnarled, gorgeous testament to what can be accomplished when an artist really lets themselves push their audience to their absolute limits. CALIGULA is immaculately arranged and produced, the magnitude and ambition of this record is nothing short of astounding. From the soft opening “FAITHFUL SERVANT FRIEND OF CHRIST,” Lingua makes it clear that you are strapping in for an album of operatic proportions. The pain, violence, and anguish of CALIGULA are inextricable from its beauty; it would be impossible to have the moments of pure harmony and joy that radiate out of this record if it weren’t for the absolute depths it sinks to.

What I’m really getting at is this: if you’re someone who generally steers clear of extreme music, this is an excellent record to attempt to change that. From beginning to end, this album will push your tolerance for unpleasant sounds, but it will equally reward you with gorgeous moments of release. Sometimes we need works of art to test us, to make us walk through fire so we can come out the other side physically unscarred but internally stronger than before. If you can make it to the end of “DO YOU DOUBT ME TRAITOR,” you can do anything. Take the plunge, pierce the veil, I can promise things are much more interesting on the other side. You can listen to CALIGULA here. [Carter Moon]