I want to love CAPTAIN MARVEL. I think I do love Captain Marvel the character. I definitely love Brie Larson, no matter how unfunny she is. At first, CAPTAIN MARVEL itself feels like an obligation. It’s like when you tell an amazing story and then when you get to the best part you’re like “…oh shit I forgot about this really important character that you definitely need to know to understand the rest.” And then you have to go back, and tell this somewhat irrelevant story as you find your way back to that main story. Except your main story is 10 years in the making and it’s like oh, you just realized you had to incorporate a woman?

Marvel definitely should not be patting itself on the back for making CAPTAIN MARVEL as much as they are. They’re hyping themselves up for finally producing their first female-driven superhero film almost two full years after WONDER WOMAN, which itself was like… barely passable. With WONDER WOMAN there was some excitement that finally, we’re getting a female! Superhero! But with CAPTAIN MARVEL it’s like… c’mon guys. 10 years? 10 YEARS? Almost 11 since IRON MAN! It’s not triumphant anymore. It’s to be expected. It’s also wildly late to be introducing the catalyst of your impending series finale. We’re a month out from ENDGAME and here we are, taking a step back for another origin story? It’s a bold strategy. So it’s understandable why CAPTAIN MARVEL feels rushed. Not necessarily in a bad way—the film wastes no time explaining who these people are, what their goal is, who their nemeses are, or why Gemma Chan is blue. Your average Marvel origin story gets caught up in the details, but here we just dive right on in. 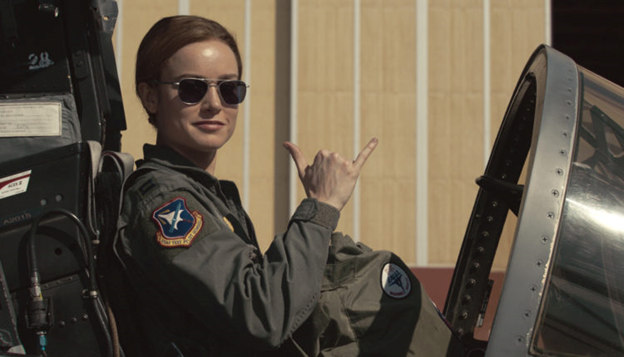 If they make her straight so help me…

Brie Larson is Vers, a Kree… uh… Warrior? I don’t really know. As I said, so little time spent on lore. I Wikipedia’d a lot of this plot. Her mentor is Yon-Rogg (Jude Law), commander of the supergroup Starforce. While on a mission with Starforce, Vers is captured by the Skrulls, a species of alien shapeshifters, and they probe her memory. She escapes their spaceship aboard a pod and crash lands into a Blockbuster in Los Angeles, California, baby! There, she’s questioned by our old pal, Nick Fury, a budding SHIELD agent and his partner, our old friend Agent Coulson!! And we’re back on track baby!!! Everyone’s de-aging tech is fascinating and works impressively well. Fury and Vers form a quick bond, Sam Jackson and Brie Larson are a delightfully mismatched pair, and the two head to Louisiana to learn more about Vers’ true identity.

CAPTAIN MARVEL finds its strength alongside the film’s twist: Vers’ real name is Carol Danvers, an Air Force fighter pilot who was captured by the Kree when they shot down her plane carrying Dr. Wendy Lawson aka Mar-Vell aka Annette Bening. Turns out the Kree are actually the bad guys, forcing the Skrulls to become refugees (Marvel’s favorite hot topic these days), and Mar-Vell, an undercover Kree, had turned against her people to help the Skrulls find sanctuary. This discovery is aided by Carol’s old friend Maria Rambeau (Lashana Lynch is… amazing and her chemistry with Larson is incomparable) and a Skrull named Talos (devastating that there are only two scenes that show Ben Mendelsohn’s face). This is where the film transitions from a dull origin story to A Superhero Movie™. The group (including Carol’s cat, the real star of the show) immediately clicks, and there’s never a doubt why these characters want to support each other. Also a series about Rambeau and her daughter just living life with visits from Carol, Nick Fury, and Talos’ family would be so watchable—Disney streaming service, please DM me. 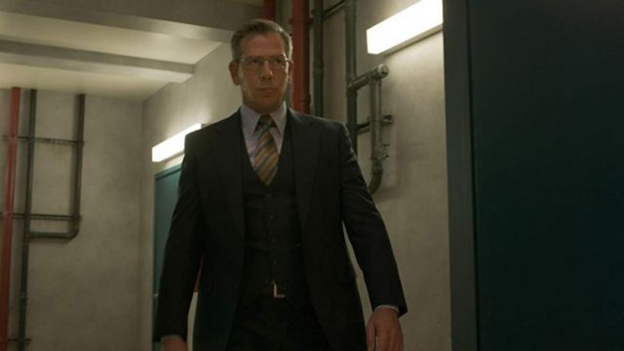 The one still of Ben Mendelsohn’s face I could find

The beauty of CAPTAIN MARVEL strikes you all at once—throughout the film we see these flashbacks of Carol dealing with microaggressions from men telling her that she’s not strong enough, she’s too emotional, that “there’s a reason it’s called the cockpit.” Her mentor tells her that her emotions make her weak and demands that she prove herself, while continually reminding her that he wants her to be the best version of herself. But, posit both Lady Bird and Carol, what if this is the best version? What if you are always the best and worst versions of yourself because you are ever-learning, ever-changing, ever-becoming? Instead of focusing on this impossible idealized version of yourself, why not appreciate your strides towards growth and progress? Carol falls to the ground in battle and as she stands we see every iteration of herself, from childhood to this moment, get back up. Every version of herself has dealt with the same bullshit and every version has picked herself up off the ground again. How dare anyone, especially Jude Law, say there’s a better version of her. She is every version all at once, and she’s doing her best.

The average Marvel superbro spends his origin story (and in most cases his entire three-movie arc) struggling to prove himself. Maybe it’s to his dad (Thor), maybe it’s to his country (Black Panther, Captain America), or maybe it’s to Tilda Swinton (Doctor Strange), but every dude’s heroic journey must involve him proving himself worthy of the powers bestowed upon him. Jude Law and Supreme Leader Annette Bening repeatedly demand Carol prove herself without using her powers, as “what is given can be taken away.” It’s this constant cycle of holding a gift over her head and threatening to take it away—it keeps her docile, it keeps her from recognizing her own abilities, and it keeps her from questioning the true nature of Starforce. It’s that fucking Sword of Damocles that acts as a metaphor for the entire nature of making films by, for, and about women and POC. You’re given this major opportunity, this incredible power, but if it fails then every further opportunity could be snatched away in an instant. Play it safe, be humble, don’t blow it. And so Carol is face to face with Jude Law and he’s so excited; finally he challenges her to prove herself to him, sans powers. All his hard work—brainwashing her, training her to repress her emotions and her powers—has been worth it. And if she were Captain America or Thor, she just might have done it. But this is CAPTAIN mf MARVEL, and she has nothing to prove. She knows her worth. 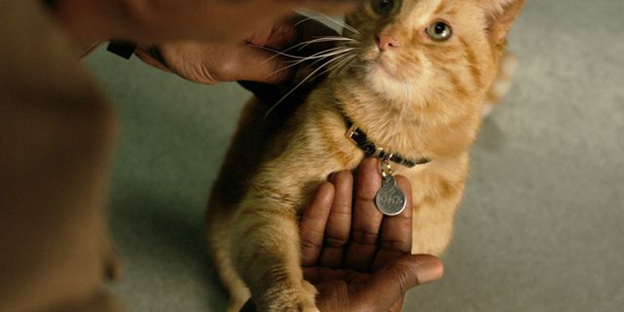 There’s a different energy to CAPTAIN MARVEL. The safety of Earth is never at stake, there’s no love interest. She just finds a cause that matters to her and she does her best to fix it. She learns she was brainwashed and takes responsibility for the actions of her team and works towards helping the Skrulls rebuild their society (remember how it took Thor literally becoming a refugee to realize oh…. Is this colonialism?). Overall, CAPTAIN MARVEL is a success. Despite a slow start and tripping over a few of the average Marvel pitfalls, once it gets moving there’s no stopping it. By the mid-trailer teaser, the hype for ENDGAME was palpable. But the biggest hype, the reason I got choked up when No Doubt’s “Just A Girl” played over a fight, was what this is going to mean for girls. Even though it’s unforgivably overdue, CAPTAIN MARVEL’s importance cannot be overlooked. Girls seeing that embracing your emotions and knowing your worth and depending on the support of your friends and using your passion and power to help underserved communities? That’s heroic. Eat your heart out, Thanos.