The internet is fucked up and mostly filled with misery right now, so it was really great when Lauren L Walker retweeted this incredible image of art critic Jerry Saltz’s absolutely batshit coffee routine. 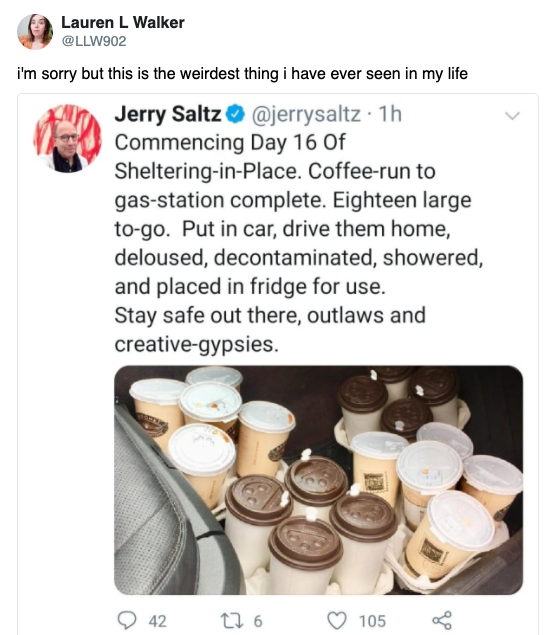 In the midst of a global pandemic, Jerry Saltz insists on making a trip to the gas station to hoard coffee in individual cups, rather than making it at home. No doubt if you’re extremely online, you’ve already read Dan Ozzi’s wonderful deep-dive into just how deep Saltz’s obsession with drinking coffee in the worst way imaginable goes. My man is collecting dozens of coffee cups from gas stations and bodegas, taking them home, and storing them in his fridge for later. He obsessively documents his batshit routine on Twitter, and is downright sassy in his defense of his utterly inexcusable habit. 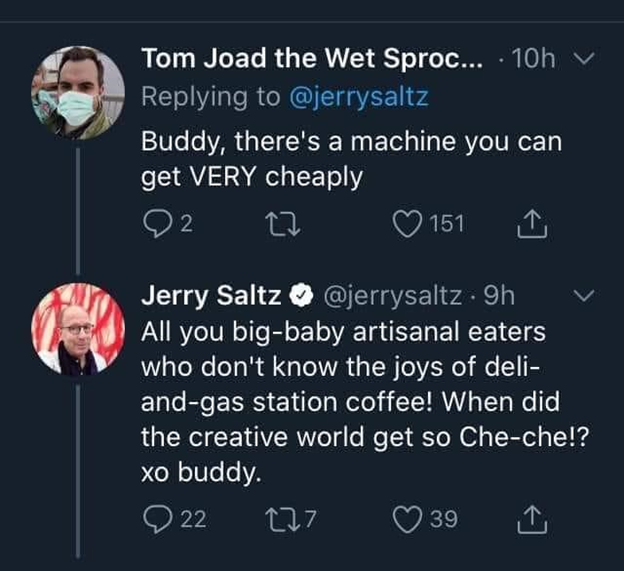 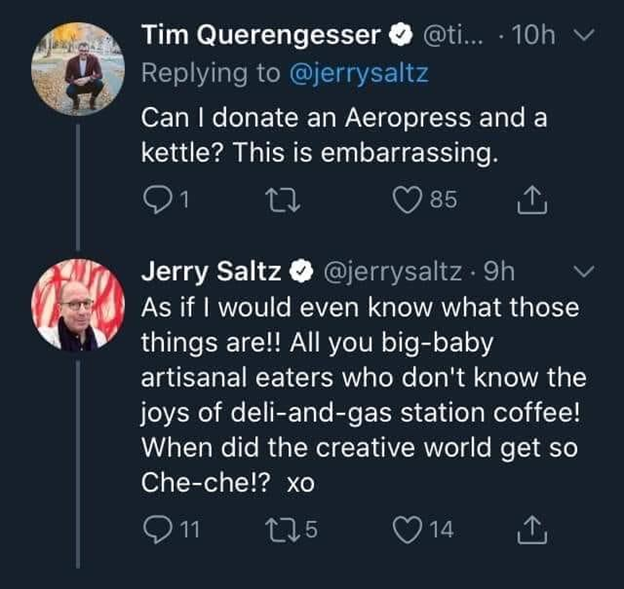 Jerry replied with some variation of the same Tweet to… way too many people. It’s really funny, and I wanna believe that on a certain level, Jerry is doing this an eccentric bit and reveling in it. An art critic calling people che-che for not wanting to drink gas station coffee is objectively hilarious. But as I read through Dan Ozzi’s writeup of this whole torrid affair, I couldn’t help but feel more than a little sad. The subtext of a lot of Jerry’s coffee posts shows a level of dysfunction that’s really hard to accept. 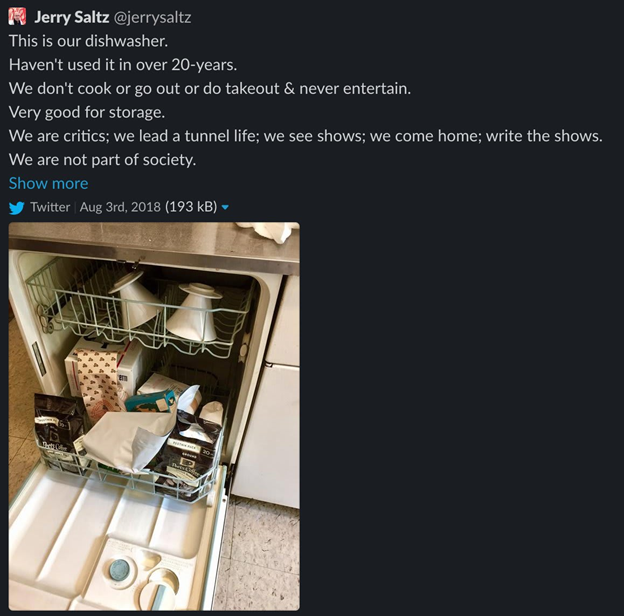 Jerry Saltz isn’t just some random whacky New Yorker, he’s the senior art critic at New York Magazine. He’s been the visiting critic at a whole host of prestigious art schools. Yet he seems utterly obsessed with accusing other people of being fussy and pretentious, while living an absolutely baffling and fussy life. It’s hard to believe that he and his wife truly don’t have guests, that they truly don’t do anything other than go to shows, write about them, drink coffee in the worst way possible, and sleep. I’m obsessed with the last line of that Tweet: “We are not part of society.”

Does Jerry really see himself that way? As a man wholly devoted to doing nothing other than attending art shows and criticizing them? His cartoonish coffee routine is so oddly reminiscent of “rise and grind” Instagram posters who want to flaunt how hard they work, but shouldn’t one of the world’s most successful art critics be… enjoying life a little more? What’s the point of reaching Jerry’s level of notoriety if you’re not going to have guests, not going to eat delicious meals, not do anything besides criticize? Is it really a point of pride for an art critic to not be part of society?

There’s this attitude that Saltz seems to have that Ozzi highlights in his article: he and his wife pride themselves on being removed from the art world, criticizing it from some kind of objective distance. On paper, I can understand this concept. But in choosing such a wasteful and maddening way to drink coffee, and seemingly refusing to do very little else, Saltz ends up coming across as downright antisocial. It’s one thing to stay out of the interpersonal politics of the art world as you criticize it, it’s altogether something else to deny yourself the majority of life’s pleasures and live as a bizarre aesthete consumed by nothing other than your desire to judge and ridicule.

I’m so repulsed and fascinated by Saltz because I see a lot of myself and my friends in him. I know what it is to let yourself believe that being consumed by art, knowing more about art than other people, and being able to articulate the Correct Opinion about it. You don’t need to know how to cook or how to maintain a variety of interpersonal relationships, you just need to be an Art Authority. To choose to participate in criticism, you burrow yourself into esoteric art knowledge, and cloister yourself away from all of the things normal people with functional brains care about. As a film student, there were plenty of times where I felt the urge to withdraw, to be able to put up a screen between me, the guy who knew more than everyone else about films, and all the people who were Wrong. Over the years, as I’ve attempted to make my own films, I’ve softened considerably in my criticism of other people’s work; it’s difficult to be harsh when you know how hard it is to create. The maddening thing about Saltz is knowing that this absolute putz, this coffee buffoon, gets to have so much leverage and influence over the careers of artists on the brink of really “making it.” When you attempt a career in the arts, you inevitably have to reconcile the fact that your work is often kept from the wider world by a collection of ghouls like Saltz, and this can be an interminably difficult thing to accept.

The great irony of Saltz’s chosen lifestyle is that it could be interpreted that he’s shut himself away from the outside world so as to avoid criticism himself. His coffee posts on Twitter provide a crack through which we can peer into his life, and quickly the illusion of austere and serious art critic falls away entirely. At its best, the internet can be a great equalizer by showing us how people really live; getting to see celebrities looking frumpy but lounging in their mansions has made us all turn against them in the midst of Coronavirus. Yet, a lot of the time the internet will be a portal that reveals just enough about a person to recognize that they were never who they really seemed to be. If the coffee routine is a giant performance art piece on the nature of criticism, it’s pretty brilliant, but if, more than likely, it’s just an insight into a sad man’s incredibly small life, then it still calls for a reevaluation of what it means to be a critic. Critics, to me, should be people who want to participate in conversation, who want to at most guide the parameters of discourse, rather than remove themselves from it entirely. In a weird sense, I’m grateful to Saltz for pushing me to articulate that.