“Fuckin’ Celine Dion can have it, I’m moving.”

It’s a simple vérité documentary: in BLOODY NOSE, EMPTY POCKETS, New Orleans filmmakers Bill and Turner Ross film the final day of operations for a shuttering dive bar, The Roaring 20s, located on one of Las Vegas’ forgotten roads, silently pointing their lens at the regulars who’ve made a second home out of the joint. Boy howdy, do these folks get pissed drunk, be it sloppily reminiscing over fond memories of when Planet Hollywood used to be The Aladdin, pouring a round for the millennials who are squandering their efforts towards a changed world as quickly as the middle-aged did, or pounding one back before collapsing into tears over how you failed to be there for your bar buddy’s grieving those many years ago. The Ross brothers are chronicling the loss of American character to the corporate machine like it was an exchange of black mold for a deadly fungus. None of the subjects are holding back, fully ignorant to the camera crew documenting their lowest moments. Well, damn, who’s to say? There’s a good chance we’re actually witnessing the brightest day of their lives.

The communal TV’s local channels serve as a Greek chorus, their shrewd commentary (Jeopardy contestants mainlining pop culture and vocabulary topics, but failing to name which Native American tribe has the largest reservation in the country*) elevated to thunderous rabble when the Turner Classic Movies lineup for the day becomes the de facto narrator. The day’s showings of John Huston’s death-obsessed THE MISFITS, the on-the-nose tragedy of A NIGHT TO REMEMBER, and the state malpractices of BATTLESHIP POTEMKIN craft a tone poem of the pains outdoors, yes, but more pointedly of The Roaring 20s’ caged-in grievances. Patrons don’t trickle out as much as they’re gravitationally sucked out one vital organ at a time, pressured out of a stench-filled dive fortress and launched into a reality they were desperate to escape. To exit The Roaring 20s is to encounter the repercussions of a burning world you hath wrought for yourselves and others. Why face the blinding lights when a whiskey sour sounds so much sweeter?

There’s only so much I can pity the white American, but the stark access to these drunks’ lives is alarming, as if BLOODY NOSE, EMPTY POCKETS, a Sundance premiere distributed via boutique virtual cinemas, is the result of paying a dozen drifters in drinks to tape them tap-dancing for a cultural elite. Or, shit, maybe they really were all just vibing! This structural mystique is core to both the greatest moral discomforts and serendipitously captured joys. I laughed my ass off when Chance the Rapper’s musty dance hit “All Night” scored the fogies’ head-in-hands sipping, alongside a jukebox playlist of licensing nightmares—when I first saw this at Sundance in January, I was certain the movie’s constant high-profile needle drops would bar it from ever seeing the light of day. Whoever legally sorted out that wreck deserves a hammock in the tropics.

Through the tunes and cramped quarters, we’re studying the behaviors of a battered people trying to make their last hours on Earth feel like any ordinary day, but you begin to notice a mysterious young woman at the fringes of the bar quietly sipping on cocktails, occupying the space like a specter of the bar’s brief prime, or perhaps a premonition of who’s to come—bright-eyed children of another, incoming lost generation scouring the aisles of the department store certain to be built over The Roaring 20s’ rubble. It’s BLOODY NOSE, EMPTY POCKETS’ delicate presentation of its culture war, showing the grizzled 60-year-old crowd raptly chatting during the bartender’s lovely cover of Orbison’s “Crying” juxtaposed against the early-30s crackups chanting along to “Fuckin’ Problems” like an ancient proverb. The boomers don’t represent evil. They represent nothing. Better yet, in the words of that one dude in the movie who looks like Lil Dicky: “You represent didn’t-do-shit.” The boomers cannot deny their failures (how can you plead the fifth to a laundry list of systemic fuck-ups?) and the ones humbled enough to admit defeat can only apologize so much for the faults of those still silently stricken with pride; as primary subject Michael explains, “I overslept one morning and the bottom fell out of manufacturing.”

Every generation trust-falls into the arms of its predecessor, and each and every single time? They’re dropped. BLOODY NOSE, EMPTY POCKETS is a documentary so profound in its miraculously captured moments of authenticity that it feels too good to be true. Watch it now.

Everything you just watched was fake. BLOODY NOSE, EMPTY POCKETS is completely staged by the Ross brothers, performed by community actors and local barflies with a natural knack for conversational improvisation, and never once acknowledged as such in the entire film. This bar isn’t even in Las Vegas: we’ve been in New Orleans this whole time. This is not a documentary: everything you just watched was fake.

Well, let me rephrase. Everything you just watched was fake in accordance to the traditional definition of cinema.

The bleeding emotions running wild in BLOODY NOSE, EMPTY POCKETS are valid, if not wholly true. Well hold on, let me back up, are they valid? If an actor summons a memory of a dying dog to conjure a feeling appropriate for the drama of a scene, are the tears not “true” if they don’t match the context of the moment? These are questions often brought up by pioneers of the self-reflexive Iranian New Wave, like the maestro Abbas Kiarostami and Mohsen Makhmalbaf, whose indelible 1996 masterpiece, A MOMENT OF INNOCENCE, popped up in my head more than a few times whilst observing The Roaring 20s as a site for genuine therapy for its “performers.” While the Iranian New Wave often uncovered the boundless limits of empathy we can share with our fellow man, the Ross Brothers’ intentions of scratching at an American rash are more ethically dubious. For whom is their uncovered truth meant to enrich? I’ve walked away from BLOODY NOSE, EMPTY POCKETS with the illusion of a full understanding of a lived-in social habitat, but what do these performers leave with? Should this be a question we spar with after every fictional film? In writing about this movie, I feel as if I’m shedding layers of myself, doing some grand public service by writing a thousand words on how I figured this movie out, but didn’t John Wilkes Booth believe he was doing a great thing? Who the fuck am I to dissect a piece of art? Who are you, what are you doing here? God, I can barely count the number of movies that’ve wracked my brain like this has; the Ross Brothers’ depiction of a fallen empire feels like the future of cinema, all the while stripping the fundamentals of fiction down to the level of Muybridge’s THE GALLOPING HORSE. 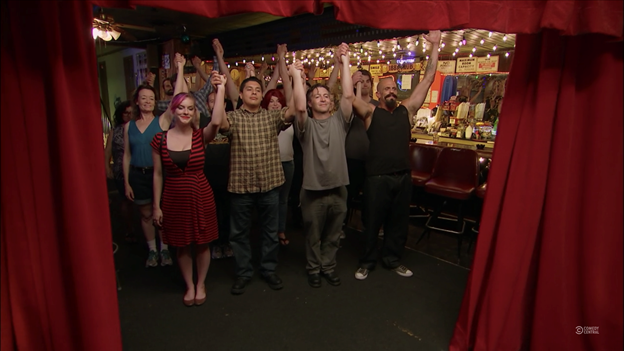 2020 is a year that has effectively vaporized our concept of cinema, with massive repercussions shattering our present, immediate future, and even distant past: without surefire means of distribution (contrary to many beliefs, very few studios nor filmmakers are chomping at the bit to toss their works into a fickle, value-draining digital market), production is left in a lethal stalemate. If a shark stops swimming, there’s no oxygen flowing into its gills, and if there’s no oxygen flowing into its gills then you have a deader than dead shark. It’s a death that would effectively slaughter an entire industry with a healthy side of starving artists abandoning their craft, or at least for a bit. Of course, it’s bigger than film. It always is. If a new shift in the imperialist American paradigm destroys all that was treasured before? Fine by me: this place sucked anyways. I’ve seen enough CVS Pharmacies built on the burial grounds of foundational cultural institutions that I’m numbed from anymore heartbreak, only invigorated to sow new fields. The models of mid-budget, independent, and studio filmmaking have been eternally shaken: the only way out of this mess is pure innovation. We’ll be stuck in a rut of attempting to preserve traditional practices, there’s no way out of that excruciating growing-phase, but folks will notice the paint chipping off the walls sooner rather than later. BLOODY NOSE, EMPTY POCKETS doesn’t just defy every traditional rule of filmmaking, it simultaneously carries itself as if it was the only film ever made and the last film standing. If there’s a better movie to be released in 2020, consider us spoiled rotten.