Political comedy isn’t dead, it’s just been dying slowly. When comedy shows as well as supposed news outlets on all sides of the ideological spectrum engage in constant, meaningless hypocrisy callouts, the landscape becomes an infinitely self-destructive cultural ouroboros ingesting the very venom it spews. So much that goes on in our political world today is so beyond parody that any attempt to spoof it seems toothless and/or instantly dated. Of all things to make a breakthrough into something of an informed sense of humor, the last anyone would have guessed would be another incredibly dumb and raunchy Seth Rogen comedy. Absolutely outrageous things happen between Rogen and Charlize Theron in LONG SHOT, yet equally shocking is how erudite the film is in making some salient points in more than a few clever ways. Yesteryear’s Rogen and Evan Goldberg comedies go tit-for-tat against today’s crass political rhetoric. Every time LONG SHOT goes in that direction, and it goes even lower at times, it’s well earned, as one would be hard-pressed to deny the film its maturity and grace in walking the minefield that is its subject matter.

Writer Dan Sterling, who partnered up with Rogen and Goldberg before on THE INTERVIEW, at first placates to the title’s double-entendre, placing a classic, cookie-cutter ‘80s rom-com set up in a heightened, but not too heightened, satirical American political realm. Him, Rogen, Goldberg, and director Jonathan Levine, whose work resembles somewhat of a unique artistic vision, especially with 2011’s 50/50 and 2013’s WARM BODIES, are all fully aware of their comedy’s role as a knot in this ouroboros loop by indulging in their established brand of depravity, only to fully understand and eventually rise above pervasive, real-world cesspool politics. It’s baffling, but LONG SHOT comes close to being a stroke of genius showcasing the evolution of its filmmakers, the comedy they purvey, and even the once impenetrable toxic discourse. 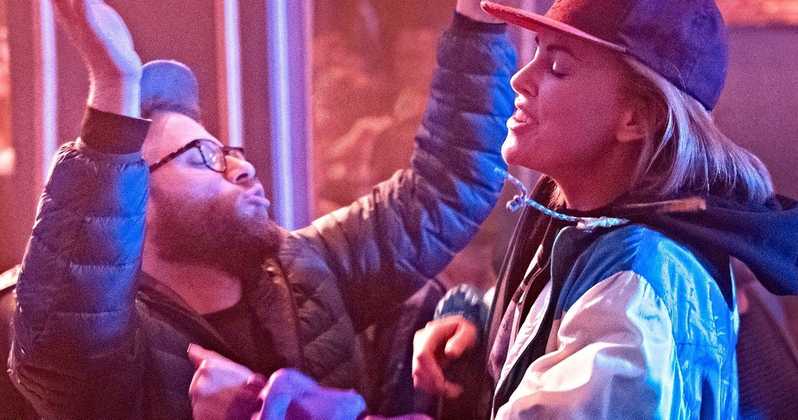 Audiences first get introduced to Rogen’s free spirited Fred Flarsky, a gonzo journalist who, after his publication is bought out by Murdoch-esque media magnate Parker Wembley, played by a villainously makeup-clad Andy Serkis, drowns his sorrows at an invite-only party thanks to the only businessman he trusts, his best friend Lance, played by O’Shea Jackson Jr. There he reconnects with his high school crush, now turned Secretary of State, in Theron’s Charlotte Field. Upon recognizing each other, the two hit it off by recalling some embarrassing memories, capping off with Flarsky further making a fool of himself in attempting to stick it to Wembley, who’s attending the same party hoping to win favor with Field and other political elites.

Madam Secretary Field answers to President Chambers, played by the hilarious Bob Odenkirk in a would-be MR. SHOW meta character, who was only elected after playing the president on a popular television drama. He tells her that he will no longer be seeking re-election, opting instead to pursue a career in film, emphasizing that the transition from television to film for an actor is hard, but being president in between does have its advantages. Realizing this gives her a clear shot in the upcoming presidential race, Field consults pollsters who candidly tell her that despite her knack for forward-thinking and comprehensive policy, that’s the farthest thing from voter’s minds. In an effort to rally the electorate behind her, Field recruits Flarsky as a speechwriter after reading his bombastic, politically-charged work. As the two work closer together, old sparks arise but so do new tensions. 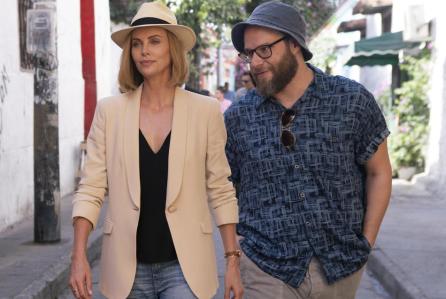 Though it’s definitely a romantic comedy, the schlub winning the beauty cliche isn’t pushed too hard. In lieu of our symmetrical-faced queen Charlize being overtly sexualized, we are given more than enough instances of a sweet, honest, and awkwardly blossoming relationship. When the two do butt heads it’s when Flarsky, heels dug in his progressive agenda, accuses Field of going back on her beliefs when she’s forced to compromise on her proposed legislative policies. “Is it because you’re a woman?” Flarsky asks, to which Field replies with “YES, MOTHERFUCKER!,” frustrated at Flarsky’s naïveté of her circumstance as a female in the political arena. It’s not just that the scene is buttoned with a noteworthy line, but that it’s reflective of how in our society men are defined by their opinion, while women by their lack of one. Flarsky flees to Lance’s place, complaining about the Secretary’s ease of allegiance switching. In the film’s only explicit mention of political party, having kept the Secretary’s allegiance ambiguous, Flarsky tells Lance, “She’s working with Democrats one day, then Republicans the next!” “Well, isn’t that what America is?,” Lance responds, “Democrats and Republicans working together?” Flarsky then demands Lance to finally tell him what party he belongs to, of which he says the GOP, promptly making Flarsky more hysterical. The film smartly doesn’t establish these harsh lines early on, but uses them to illustrate not the most nuanced view on the country’s current divide, but a much-needed one too often dismissed.

For a film filled with all of Rogen’s farcical staples, from hallucinogens to phalluses, it is also filled with insight, taking the form of either laugh-out-loud witticism or sincere heart. If political comedy is on its deathbed thanks to the Trump era, this is the healthcare solution it needs. LONG SHOT ought to be remembered for wisely avoiding so many trappings of political comedy and maturely understanding the peculiarities of the evershifting American political structure, but also for that shot of Seth Rogen cumming on his own face. Oh, did I mention Boyz II Men make an appearance? Now you have to see it.

Nanami Ozone Make Their Presence Felt on the Refining NO