SPOILER WARNING: An apophenic hayride through NOPE is about to begin…

No animal is saddled with quite as much cultural import in the U.S. as the horse. What separates our equine friends from the cat or dog is not its association with speed or power, but the idea of freedom, an idea perverted in its subjugation—man putting it to work in order to augment his own speed and power (cavalry, horsepower)—and therefore his freedom. From Paul Revere to cowboys (The Cowboys, for that matter, and The Broncos, The Colts…), our automobile obsession (Charger, Mustang), to one of its most polarizing presidents, the American canon is so steeped in horse imagery that it is no small wonder so much of the population seems unable, or perhaps unwilling, to separate myth from reality.

It would be enough for NOPE to subvert the Western with a Black family whose history runs hand-in-hand with that of the film industry, but for Jordan Peele to invert JAWS, the ur-blockbuster, (itself a retelling of MOBY-DICK, The Great American Novel about obsession, hubris, capitalism, etc.), replacing that proverbial white whale with a cloud-dwelling UFO in the desert, suggests he is aiming for something loftier.

Peele lays out his cards in the first moments of NOPE with an obscure Old Testament epigraph, a seemingly inexplicable chimpanzee attack, and a bizarre death. While on the job, Otis Haywood, founding father of Haywood Hollywood Horses, is killed by a nickel falling from the sky, hitting him in the eye. Here something as unassuming as a coin—a piece of currency bearing the likeness of Thomas Jefferson: Founding Father, author of the words “We hold these truths to be self-evident, that all men are created equal,” and slave owner—is used to suggest that, even today, Black people are often seen as little more than collateral in an economic system that advances itself through violence. And in what might be thought of as a non sequitur are Otis’ dying words: a list of names including those of Beethoven and Goethe.

In his 1981 novel VALIS, Philip K. Dick, assuming the name Horselover Fat, tells of an alien satellite which turns out to be a form of intelligent life, and suffers a nervous breakdown in the very first sentence. This calls to mind both Dostoevsky and Nietzsche, who were severely affected by horse beatings witnessed in their lives and the latter of whom, story goes, never recovered. Here, Dick, an author profoundly concerned by fascism, also relates the relationship between Beethoven and Goethe, preeminent luminaries of the German Enlightenment, to the horrors of the 20th century.

Dicke Eiche, the oak under which Goethe is said to have written FAUST, was preserved during construction of Buchenwald and incorporated into its grounds. What might have been a mere historical footnote would come to serve as a potent symbol for the grotesquely Janusian mindset of Nazi Germany. Drawing inspiration from Jim Crow laws in the American South, the Nazis industrialized death, utilizing slave labor at Dora-Mittelbau, a subcamp of Buchenwald, in the production of the V-2 rocket. Designed by Wernher von Braun, this comparatively crude weapon would lead to the development of the ICBM—and the realization of death at a global scale.

Recall now Stanley Kubrick’s DR. STRANGELOVE OR: HOW I LEARNED TO STOP WORRYING AND LOVE THE BOMB in which Major T. J. “King” Kong (played by real-life cowboy Slim Pickens) rides an H-bomb into a Soviet ICBM site as if it were a bucking bronco, touching off the apocalypse.

Death, too, is a horseman.

More than even the horse, the rocket would come to symbolize speed, power, freedom… Transcendence. 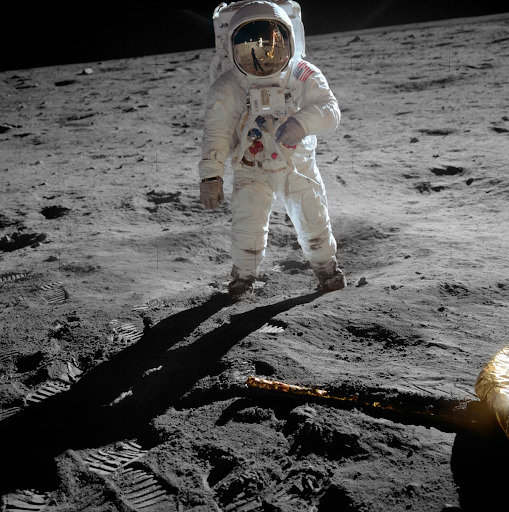 What does any of this have to do with aliens? Consider the following timeline:

As in his 2019 film US, Peele makes use of numerological symbolism in NOPE as well, when Ricky “Jupe” Park twice mentions the number 613: once when recounting the chimpanzee attack he witnessed as a child actor as “six minutes and thirteen seconds of havoc,” and again when whooping up the new Star Lasso Experience at Jupiter’s Claim, the amusement park based around his short-lived acting career, stating that “The Viewers” (his name for the UFO he’s been feeding OJ’s horses to) arrive at 6:13 PM.

Jewish tradition holds that the Torah contains 613 mitzvot. Kabbalah extends this belief, teaching that the human body is composed of 613 parts, one for each of God’s commandments. 613 is also an “angel number” said to promote ambition and achievement. Success, however, must be met with courage and strength of character. Jupe, whose self-mythologizing goes as far as building a Western theme park in his own image, is certainly ambitious, but not in any real admirable way—he’s a nice enough guy, but he is also an idolater. Surviving Gordy’s rampage unharmed, profiting greatly from the tragedy, he comes to believe he is somehow special. Never does it cross his mind that the tablecloth he hid under prevented eye contact with the enraged ape, sparing him. Perhaps thinking it just another animal-trainer relationship, Jupe strikes a Faustian bargain with an alien entity, bringing about his downfall.

The Book of Nahum, a reading from which opens the film, deals primarily with the prophesied destruction of Nineveh, capital of the ancient Assyrian Empire, but, as told in Jonah 3:1–10, God initially showed mercy to the Ninevites for repenting their “wickedness”. Later, having not learned their lesson, like Jupe, they were destroyed. Nahum 1:1–8 also refer to “whirlwind and…storm” and “overflowing flood”, not unlike the freak rainstorm when the UFO attacks Jupiter’s Claim. In much that same vein, Jupiter was the Roman king of gods, as well as of the sky, of storms, lightning, and thunder. To him livestock were offered. Jupiter’s domain, then, is the sky—his claim, everything under it. 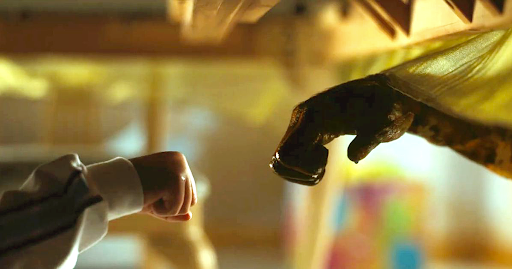 Michaelangelo. The Creation of Adam. C. 1512

Also attending the Star Lasso Experience is Jupe’s “Gordy’s Home” co-star, Mary Jo, who wears a veil over her scarred face, paralleling the tablecloth and implying she learned from the attack where Jupe did not. In Exodus, Moses wears a veil after receiving the Ten Commandments from God manifesting as a “pillar of cloud.” Exodus also details the Veil of the Tabernacle which separated “the holy place and the Most Holy” and contained the Ark of the Covenant. Anyone who attempted to enter the Holy of Holies (to “part the veil” between Heaven and Earth) other than a High Priest offering a blood sacrifice on the Day of Atonement would be killed.

About this time, OJ realizes the UFO is no ship, but a territorial predator that really doesn’t like being looked at. In what can definitely be called “a bad miracle,” the alien reveals its true form, its fearful symmetry evoking some incomprehensible mix of jellyfish, butterfly, flowing cloth… or Biblically-accurate angel. Without getting into any of the fringe beliefs equating angels with aliens and vice versa, it must be accepted that, by definition, any god or angel would inherently be alien. As if to cast aside all doubt is a character named Angel who even says, “ANCIENT ALIENS, History Channel. Watch that shit.”

The final pages of GRAVITY’s RAINBOW contain a section titled “WEISSMANN’S TAROT,” which gives a reading of Knight of Swords (a card of ambition and action depicting a knight on horseback) covered by The Tower (“the chastisement of pride and the intellect overwhelmed in the attempt to penetrate the Mystery of God”). What follows are two short passages, the latter, “THE HORSE,” telling of how “the heathen Germans who lived here sacrificed horses once, in their old ceremonies. Later the horse’s role changed from holy offering to servant of power.”

With the rise of the military-industrial complex following WWII, two things occurred in the world of pop culture: the UFO craze, and a revival of cowboy machismo spearheaded by such larger-than-life figures as McCarthyist draft dodger John Wayne and fellow actor Ronald Reagan. Xenophobic responses to Cold War anxieties they may have been, these modalities nevertheless reflected the double-mindedness of a nation that could, on one hand, envision life among the stars, and, the other resting on a six-gun, long for a return to a gloriously-imagined past.

Finally I ask that you recall the scene in 2001: A SPACE ODYSSEY in which a bone becomes a spacecraft.

History is a line where vision may cross unimaginable length but the distance from one side to the other isn’t nearly so far. Along that line—perhaps above—is all that may be said to be good; opposed to it, all evil. Somewhere, too, lie genius and madness. Science, literature, art, film… All Creation, past, present, and future.

What end does power serve if it comes at the expense of everything else? If a thing such as a god exists, where does it fit into all of this? Dark logic took man across the Atlantic, westward, to the stars, it links the unthinkable to the unknowable. As we venture further into that realm of gods, penetrating its mysteries, what is it we hope to find? Perhaps there is a place set aside for all the lost names, where those Adelaides and Alistair E. Haywoods, all of history’s “second sheep” are remembered. Or maybe one should be made for them here, now.