Just as movie theaters were re-opening, Delta swooped in to taste the popcorn: THE GREEN KNIGHT has brought back the A24 clout junkies to the multiplex, meanwhile SPACE JAM: A NEW LEGACY continues the trend of studio films having strong openings and then floundering like few other box office flops have. Things are going great! Things are healthy! 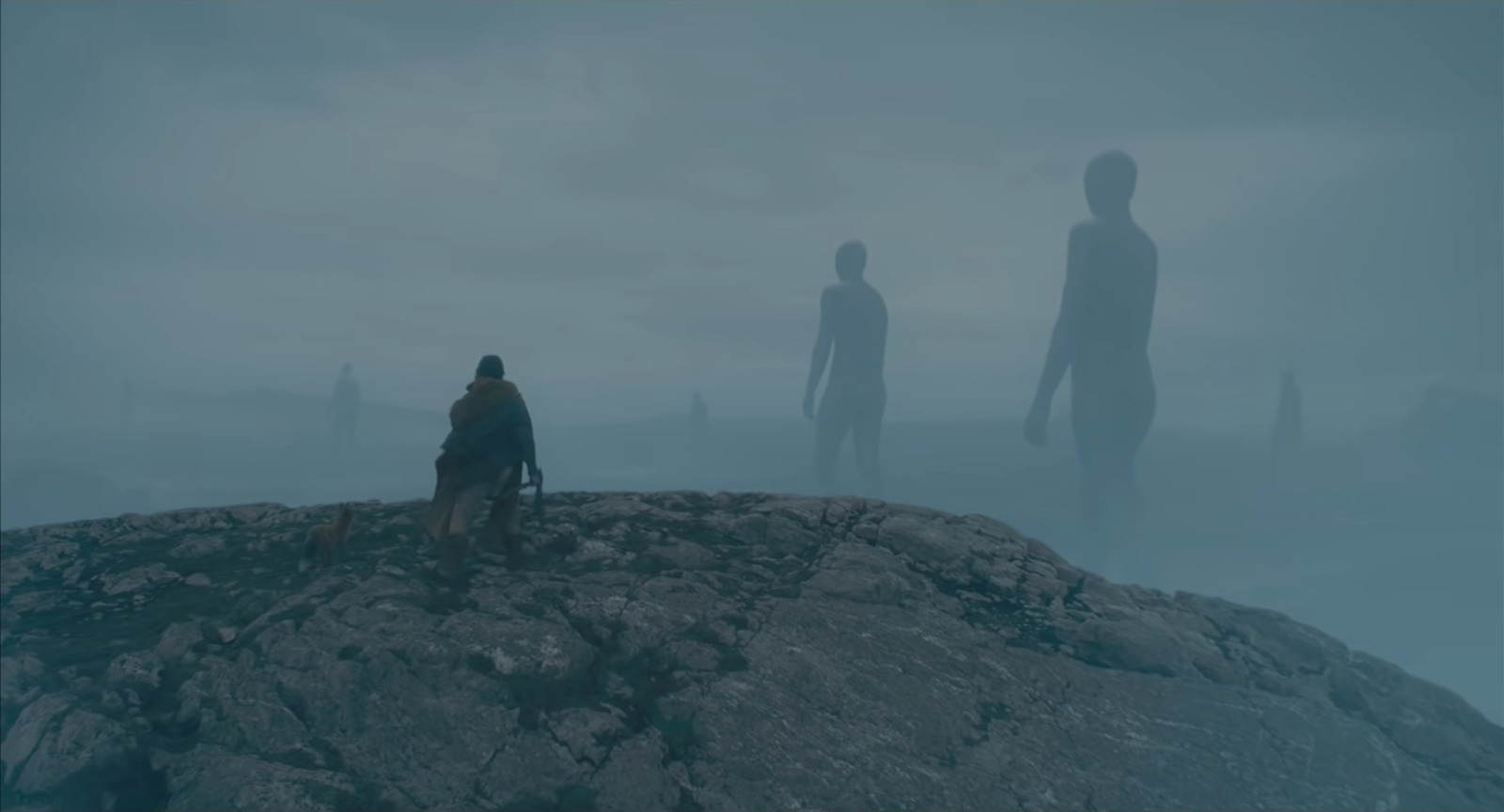 I am decidedly not the intended audience for David Lowery’s THE GREEN KNIGHT. For one, A GHOST STORY, often regarded as the director’s best, was one of my absolute least favorite filmgoing experiences of the 2010s, a haughty descent into arthouse camp unlike anything I’ve ever seen been called a masterpiece by the New York critics circuit. Their bar is low, but A GHOST STORY’s praise stamped it in the mud. For another, the A24 style guide has stalled out; the excitement of witnessing a burgeoning studio create their image by fostering a myriad of genres has been softened by their transition into a late-90s Miramax era of self-parodical greenlights. And, perhaps most of all, beyond getting positively blasted at a Renaissance fair while I call everyone attending a dork, I’m not an Arthurian legend guy. For full context, I didn’t realize that I was watching King Arthur or The Round Table in this movie until 30 minutes after the credits, and only because I was checking character names on IMDB for this review.

Lowery’s take on the self-sabotaging quest of Gawain glibly deviates from the source poem from which its based on while hinging entire arcs on minute details from the same screed. Were it just vibes (there’s a better version of this movie that fully embodies taking shrooms at a Buena Park Medieval Times), I think general audiences would be more accommodating to the vision, but there’s enough plot to keep track of in order for story follow-throughs to make any lick of sense that even I left the theater racking my brain over how we got from A to B rather than luxuriating in the mustard fogs and stormy dregs of a profoundly felt odyssey into one man’s cowardice, there and back again. The final 20 minutes are bewildering, both unspeakably infuriating and still managing to hit my brain’s prostate as Lowery spirals our western ideals of nobility into pithy death sentences for all complicit parties. If ye seek the crown, ye seek the lifeless cycles on your way to it. All royalty is a casualty of war, as we whack each others’ heads off and make those executions the backbone of our tallest tales. He’s so close to nailing the complexion of an apocalypse, instead derailing into distractions of symbolic (or is it?) rags that were brought up in the film’s weakest sub-plot featuring its most wasted actors: Alicia Vikander must’ve sold her soul for that Oscar, what is happening there?

Lowery has the propensity to try anything, the efficacy of his techniques ranging from Imamura in 1960s Japan to Brian De Palma desperately trying to resuscitate a fledgling THE BONFIRE OF THE VANITIES. I look back so fondly on the claustrophobia of Camelot, with such harsh and muddy divides in light that the early images through a brothel begin strobing; on the flip-side, he also plops colored LEDs in a pond, for some reason. The film is too aware of the position it holds in the marketplace, almost willingly abstract in a way that directly plays to Lowery’s glee that THE GREEN KNIGHT will be playing in an adjacent auditorium to JUNGLE CRUISE and BLACK WIDOW. He plays off your knowledge of Saturday morning cartoons, LORD OF THE RINGS, and Skyrim to form the basis of his own recreation of Medieval legend. It’s difficult to deny such a relatively devil-may-care offering, but there’s a self-awareness that blocks the film from courageously embracing honest absurdity. Lowery’s redeemed himself with his very own BRAM STOKER’S DRACULA, playing less with the history of the medium, as Coppola did, and instead rustling about the motif toy chest of A24 itself; the production company’s t-shirt-branded images as exalted as those of Murnau or Méliès. Most moments in THE GREEN KNIGHT are liberally aped from the likes of Aster, Eggers, Lanthimos, Glazer, and Jenkins; at its best, you get a slurry, decapitation-crazy, post-modern Tarkovsky riff using brand reliance to communicate the follies of legend as recited by the high school AV club stoners, and at its worst, it’s… Well, re-read that last sentence. At least it’s not in 4:3! [Kevin Cookman] 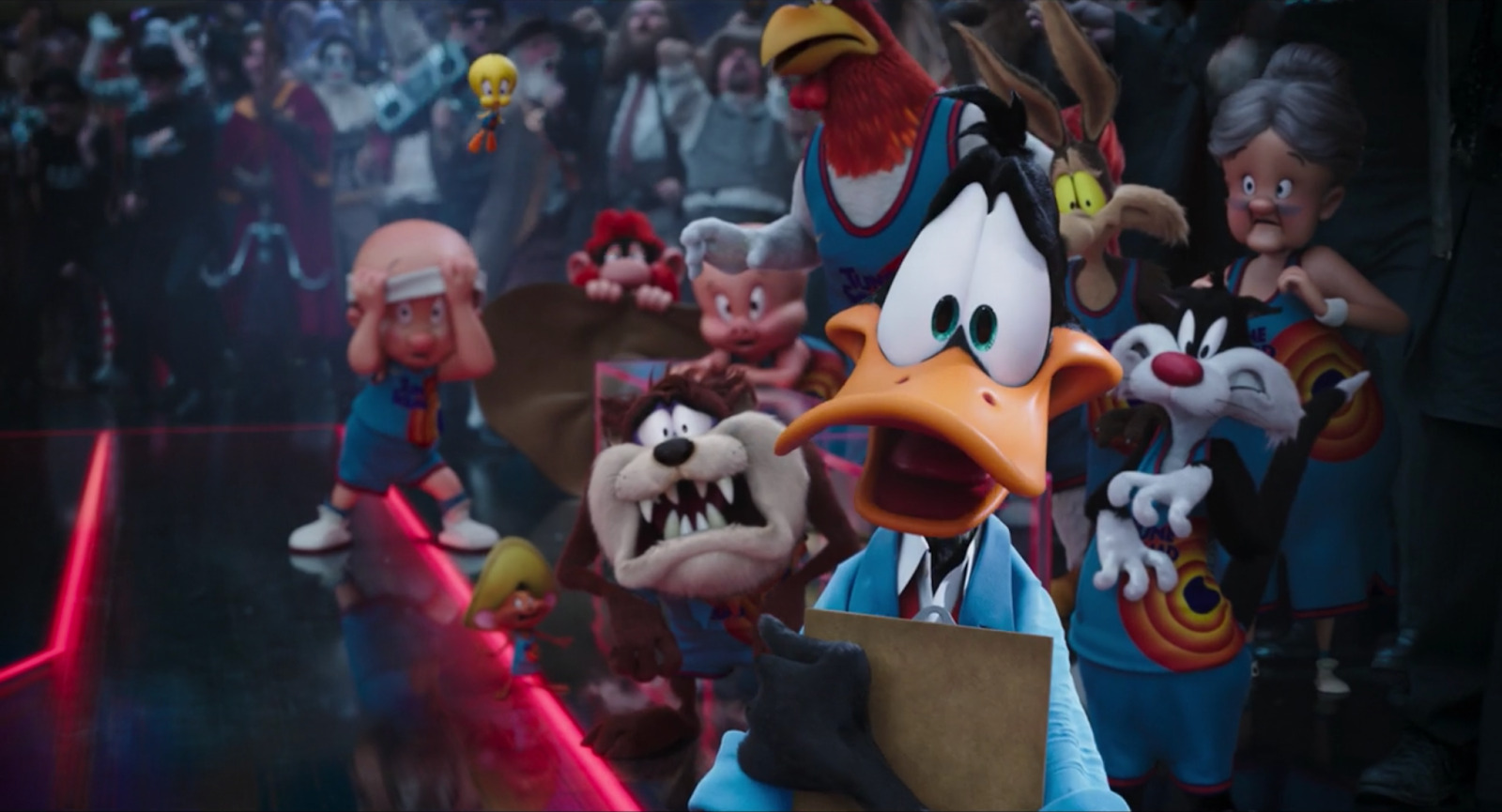 SPACE JAM is bad. People will tell you it’s good, actually, but in true “Only ‘90s Kids Will Remember” fashion, they’re telling on themselves. No one older than 50 or younger than 25 right now could watch SPACE JAM and think it’s anything other than a hodgepodge of cynical brand building, product placement, cameos, and a weird plot about slavery. Yeah, I like seeing Bill Murray run on to the court to save Michael Jordan and the Tune Squad, and sure, I also love thicc Lola Bunny, but I also long for a time when I didn’t have to pay taxes and my grandparents were alive; that doesn’t mean the film is good.

SPACE JAM: A NEW LEGACY is somehow 10 times worse, a genuinely impressive feat no matter how you spin it, but importantly, it’s worse in a way that doesn’t make me think Gen Z is going to have the same kind of rudderless nostalgia for it in 20 years when they inevitably make SPACE JAM: A NEWER LEGACY with some future basketball prodigy. At the center is a plot that meta-textually weaves in Warner Brothers IP ranging from BATMAN RETURNS to CASABLANCA by setting the film inside a studio server. Don Cheadle plays an evil algorithm (??) who resents LeBron James’ status in the real world (???), forcing him to play a game of basketball that streams in the real world to people’s phones (????). It’s a plot that when said out loud makes you yearn for the surreal enslavement stuff from the original. And I’m not deep enough in my cynicism to not say that, if done correctly, seeing GAME OF THRONES or IRON GIANT weaved in the narrative could be at least kinda cool (?????), but, naturally, the film uses the various properties as smooth-brained easter eggs for internet weirdos to pick up on and post about, as though the whole movie existed as a viral way to communicate brand synergy to the dumbest nerds imaginable. Watching Roadrunner and Wile E. Coyote dash around MAD MAX: FURY ROAD is a fucking Geico commercial, not a piece of comedy— hope the joke based around George Miller’s hyper-violent action thriller landed for your eight-year-old niece.

SPACE JAM: A NEW LEGACY is so bad it currently has people online going back to reassess another “Only ‘90s Kids Will Remember” Merrie Melodies mess, LOONEY TUNES: BACK IN ACTION, but at least that film had Looney Tunes doing Looney Tunes things. Somehow beyond Bugs Bunny breaking the fourth wall early to comically address the pseudo-uncanniness of the plot, the two pieces of IP that don’t seem to be on the server are the recent LOONEY TUNES reboot on HBO Max and the original fucking SPACE JAM. A plot spinning its wheels around eye-rolling father-son dynamics and a computer drive filled with Warner Bros. references the average child won’t understand is baffling given how well received the latest cartoon was and how quote-unquote “beloved” the 1996 Michael Jordan movie was. The sheer thought that I felt mad at the SPACE JAM erasure within the sequel should tell you everything you need to know about how grueling the two ensuing hours are, but it feels 10 times crazier given Warner Bros. clearly had several templates to work off of, but instead offered us this mastrabatory mess. Bugs Bunny deserves better than this. [CJ Simonson]