Few movies feel as fresh as the year they came out—let alone as vital—but KIDS, even through its 25 years of aging, hasn’t wrinkled or lost its breakneck gait one bit. Larry Clark’s audacious day-in-the-life movie still bristles the senses and antagonizes our taboos. Embroiled in controversy since its release in 1995, KIDS stands out as one of the best movies about the malarial streets of New York City: the cultural paranoia around sex in the AIDS era, fraught  adolescence, and the relationships between newly-awakened sexual beings which are both shockingly intimate and distanced from reality. It’s one of the best movies—period.

You don’t need to know too much about the plot of KIDS. The events of the movie constitute quotidian happenings for these teenagers, but they occur for us as explosive ethical disturbances. Two teenage boys bounce from house to house to park to house, vacuuming into their exploits other teens they run into over the course of a single day. It’s a lot like the other great NYC movie, DO THE RIGHT THING, in its conceit and parched, sweltering atmosphere. The beating sun breaks the kids out into shirt-wiping sweats; you can practically see the ultraviolet blisters form on the sidewalks and tenement buildings. 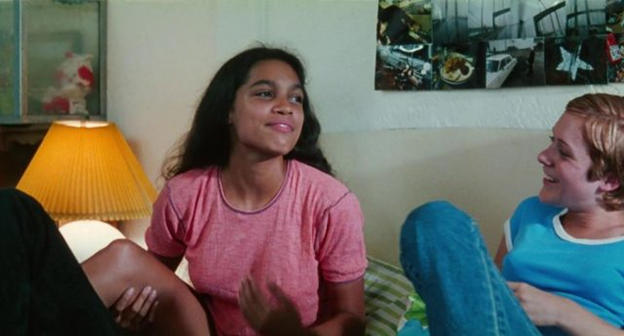 Most of the actors are unknowns, literally picked off the streets, but notably big names like Rosario Dawson and Chloë Sevigny give their first turns here. The inexperience of the cast doesn’t show one bit; Clark achieves the very difficult task of pulling actorly performances from non-actors, yet performances free of conventional performative tics or self-consciousness. Every conversation feels improvisatory despite closely following Harmony Korine’s script, and, yes, Harmony Korine of THE BEACH BUM and SPRING BREAKERS fame wrote the screenplay for KIDS—at the startlingly young age of 19. It’s an incredible screenplay, wise beyond its writer’s years. Nothing Korine has penned since (perhaps with the exception of JULIEN DONKEY-BOY) matches the depth and caustic insight of his work here.

That being said, I’m not sure another director could have realized Korine’s script as precisely and evocatively as Larry Clark. The director frequently shoots on an extremely long lens—if the kids are traveling to their next location through pedestrian traffic, he’ll place the camera across the street and pan as they move down the sidewalk. The shot is punctuated by the out-of-focus motion blur from speeding cars, with the lens’ extreme compression lending the scene both an urgency and a voyeuristic element. Detractors of the film claim that KIDS is exploitative, but I think Clark predicted those misgivings: the camera is a curious observer, yet when the kids commit a brutal act of violence, he shoots from the POV of the victim. The camera is attacked by their blows and kicks, but what’s most important is the sadism on their faces. They are not only assaulting a person and the camera, but the viewer as well. What does that say about the teens’ attitudes toward their being documented? I believe that they are contemptuous of it, which inevitably makes us feel a bit contemptuous of them. Character and viewer are equals. You can appreciate Clark’s work without sacrificing your morals; in fact, he makes it easy for you.

Watching KIDS now is to provoke the dialectic of the film’s material stasis against the continual evolution of its subjects. In 1995, it was fashionable to rebel against authority even with little understanding about what that authority was or how it operated (though the manipulation tactics of the pervasive PSAs were clear to all). It was rock music’s “stick it to The Man,” but The Man—this paternal authority—was always loose and shapeless, splintered and undefinable. Little was wrong if you chose not to look for it. If everything seems stable with the symbolic order, then there is space to be unstable: drinking, assaulting, raping, smoking. In other words, the kids of KIDS were acting on an agency they believed they had ingeniously swiped from the clutches of “the system.” There is a different kind of agency in young people 25 years on; a political agency born out of indignance, fatigue, and self-preservation. Acts of violence perpetrated by the state and its foot soldiers have never been more visible. Civil unrest grows and concessions are refused. There is an unprecedented awareness of who The Man really is. 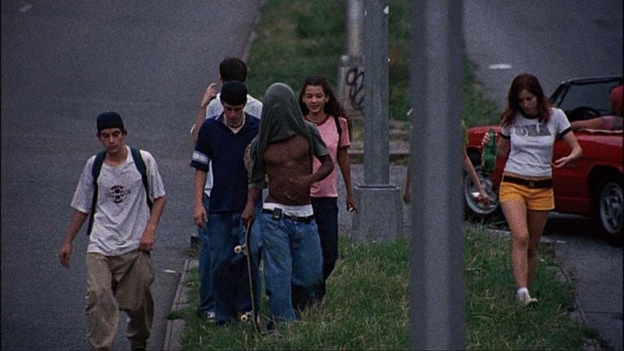 If the antics on display get to be too vitriolic for you, don’t throw in the towel. KIDS contains the antidote to its own poisons: a mid-movie scene with Chloë Sevigny’s Jenny riding in a cab driven by an eccentric old man provides levity and even a mystic quality. Initially the cabbie makes the sullen Jenny smile with his genial inquisitiveness, though the innocence of the scene does not last long. It takes only a short while before the man notices Jenny’s appearance is similar to one of his old high school flames—the first girl who let him put his tongue in her mouth. Jenny’s visage turns weary as the conversation turns to sex—it always does—and she gazes out the window as a high jazz score swings in beat with the street hustlers, the dope dealers and the deadbeats, park-goers throwing frisbees, and the legless men on skateboards. The Big Apple with the worms inside, gnawing out.