MIDSOMMAR’s blaze-of-righteous-fury finale was a primary talking point in 2019’s summer film-going, with many regaling the sumptuous catharsis in Florence Pugh’s indoctrinated Dani finally putting an end to her doomed relationship with unbearable grad student, Christian. Those ends came in the form of a gutted grizzly and a Swedish barn fire, inspiring countless “Did he deserve it?” arguments and couples Halloween costumes to come. I had trouble buying it. Hailed as the ultimate break-up movie by members of the critics vanguard, I couldn’t wrap my head around the movie that simply. Rather than eradicating a critical component heaping on to her profound grief, Dani found a scapegoat in Christian. Her final grin felt temporary, with a wash of perpetual torment and newly generated guilt to come. Originally, I thought Aster had whiffed his ending. Yeah, those are some great final images, but I don’t really feel the elation or relief that I think he wants me to feel right now. That smash cut to black doesn’t feel like the triumphant coda that I’ve grown accustomed to this moment having. I’ve come to realize that maybe, at the expense of orthodox narrative catharsis, that was the point. But what if there was a longer version of the movie that helped land that ending?

Premiering at the Lincoln Center’s “Scary Movies XII” programming series, A24 decided on a one-weekend-only engagement for MIDSOMMAR: The Director’s Cut, with news of a home video release still up in the air (an announcement they’ve held back to boost the weekend’s ticket sales, for sure). In a six-screen Burbank theater at 2 PM on a Friday, the house was packed—while initial-run box office receipts may not prove it, MIDSOMMAR is A24’s 2019 smash hit, a film certain to continue packing these houses for many repertory screenings to come. I originally sang the Swedish ordeal’s praises upon its release and, after hearing many a podcast interview about how many darlings Aster was forced to kill to get the film into multiplexes worldwide, I was super down to watch a three-hour cut. Dearest MGRM readers, it’s really quite difficult to express how much I regret this decision.

Runtime long as a banquet table, but about as appetizing as whatever they’re serving

Egregious, tension-destroying sign-posting litters The Director’s Cut. Aster all but includes a scene where the entire commune holds a town hall meeting where they decide on Dani as their prey. Long after the first social cue indicating that Dani’s been targeted, around when she’s helping bake meat pies, there’s an added moment outside the kitchen where Siv gives her an inquisitive glare. The May Queen is no longer selected by the rules of the paranoid subconscious—she’s just a mark. It’s the fucking worst. The re-contextualizing of character interactions is irritating de-escalation of horror, but none of it holds a candle to one of the The Director’s Cut’s worst additions. While Dani partakes in the group dance around the maypole, Christian engages in an extended conversation with Siv wherein she openly proposes mating with Maja. Christian skeptically, yet warmly considers it. His sex scene, one of the wildest ever filmed, was originally borne of manipulation and drug-induced coercion. Now? He was good to go from the get-go, he’s just feeling a little out of it. An absurdist depiction of sexual assault becomes a haunted house attraction, I mean, dude, it really blows.

The infamous stolen thesis stand-off (during my screening, four people used it for a bathroom break) has a hilarious added revelation that Christian, an anthropology major, never learned how to use JSTOR until graduate school. It’s the type of character info so niche that it tells you everything you need to know about the character, but also so niche that there was no choice but to cut it from the general release. This extended argument and the ensuing half-assed interview Christian conducts with Maja are hilarious. Christian is more of an asshole than ever, but it plays more as comedy than substantive material for the film to play off its operatic conclusion. Aster comes close, though. The greatest moment of The Director’s Cut, bar none, comes early in an extended version of the scene where Dani confronts Christian about not telling her about Sweden. We get to see Christian awkwardly invite Dani and provide the all-time-scummy excuse that he was intending to and that she “ruined the surprise.” It’s such a profound fuck-you right to her face and, had it been included in the original cut, would have been a showstopper highlight.

Many of the The Director’s Cut additions are bookmarked by stellar moments! It’s just too bad that some awful screenwriting was gussied up with some remarkably charming flourishes. A neat 10ish-minute child-drowning ritual is introduced by an exasperated, completely fed-up Dani fresh from witnessing an Attestupan asking “Why? What’s happening now?” I originally compared MIDSOMMAR to drowning in quicksand and the newly included scene of a ritualistic lake sacrifice is positively on-the-nose, but the prolonged set-piece is ultimately extraneous background for the brief sight gag of Connie’s bloated, dripping corpse and some needless foreshadowing for when Dani’s wailing becomes the Harga’s, the centerpiece of MIDSOMMAR (still one of the best scenes of the 2000s). It is followed by another argument between Dani and Christian about leaving the commune that finds the former pervasively apologizing to him and the latter performing the “If you want to leave, then leave, but I’m here for a reason” song and dance, and while it’s fun to watch Reynor go full metal jacket with the over-the-top gaslighting, it precludes Dani’s nightmare of the boys abandoning her from being a vision of anxious instinct. Now, it’s a forecasted punchline.

The Director’s Cut works hard to strip the mystique from the helplessness. For those who were put off by MIDSOMMAR’s experiential nightmare exercise in irrational dread and craved more traditional horror fare with answers to “plot holes,” here’s your cut. Original comparisons to Tobe Hooper’s THE TEXAS CHAINSAW MASSACRE originated from Aster’s focus on viscera over screenwriting—his sadistic pleasure in putting an audience through dour feelings trumps any labored efforts to expand the lore. Everything in The Director’s Cut was cut for a reason. Unfortunately still missing are any meaningful moments shining light on Dani’s family (having the Swedes espouse the positive values of belonging to a family ad nauseam cannot equate to the knowledge of who’s been lost) and, also conspicuously absent, anything that makes Reuben, the unclouded inbred prophet, anything more than a prosthetic prop. With a longer runtime, he feels even more inessential. 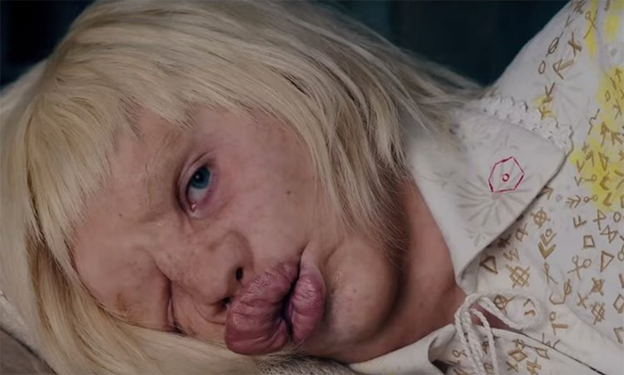 Buddy… Why do you exist?

The new cut is junk, but, don’t get me wrong, it’s brought me to a newfound appreciation of the original. MIDSOMMAR strikes me so personally and emotionally that I find it difficult to talk about with others, but I cannot stop exploring its fascinating formal contradictions. MIDSOMMAR’s failures are the reasons for its greatest successes. One of the film’s biggest drawbacks is its characters’ inactivity, but it is that very inactivity that makes Dani’s final choice, one finally her own, so powerful. The questionable emotional satisfaction of a bear burned alive is some of the finest trapeze work I’ve seen, even if the needle-drop to Frankie Valli insinuates a more grandiose ending than what is actually achieved. At three hours and a third rewatch, the grace notes are that much more graceful. How the flower on Dani’s crown flutters its petals during Pelle’s kiss; Christian’s dick dipped in period blood. How Pugh can submit her cheeks to the forces of gravity on a whim and how Bobby Krlic’s opening notes to “Gassed” mimic a car horn as the garage door opens; the way Liv Mjönes wakes a paralyzed Christian as if he’s the subject of an ASMR video. How Aster shifted from haunted life-size dollhouses to making greener pastures feel like solitary confinement. Stick with the original cut, but leave with the reassurance that A24 gives their directors some damn good notes.

STREETS OF ROGUE Is the Zany, Coked-Out Cousin of HITMAN