I’m not really interested in discussing DRAGGED ACROSS CONCRETE, the third film from auteur S. Craig Zahler, on a critical level. From a purely cinematic standpoint, there are precious few gripes to raise with it. The movie is a brutal and brilliant marriage of the noir and exploitation genres, built on a tight script and carried by three electrifying lead performances. For what it’s worth, no other critic cares to take this angle, either; nearly every review for the film on the internet is prefaced by an identically curt admission of respect for Zahler’s mastery of his craft. Instead, it seems the question on everyone’s mind is what Zahler’s intention was with his latest work.

Like previous Zahler entries BONE TOMAHAWK and BRAWL IN CELL BLOCK 99, DRAGGED ACROSS CONCRETE is a lengthy, deliberately paced piece of slow cinema punctuated by brief but indelible moments of ultraviolence. Unlike those other movies, DRAGGED stars Mel Gibson—an actor whose past incendiary statements on minorities loom over him to this day—as a morally ambiguous cop alongside veteran Zahler collaborator and fellow Hollywood conservative Vince Vaughn. Casting choices like these have led Zahler to be labeled by some as a reactionary, and his films as “right-wing fantasies.”

It’s not a totally unreasonable accusation. Zahler enjoys a notable following among the alt-right, no doubt in thanks to the powerful face value of the imagery at play (similar to STARSHIP TROOPERS, perhaps the most overt satire of facism out there). The director has repeatedly defended his films as having no political bent, yet while the “claiming no stance is itself a stance” argument holds true, I’m inclined to believe that Zahler wants to shock on a primal level, not a rhetorical one, and is ready to use any and every tool at his disposal to achieve that goal. 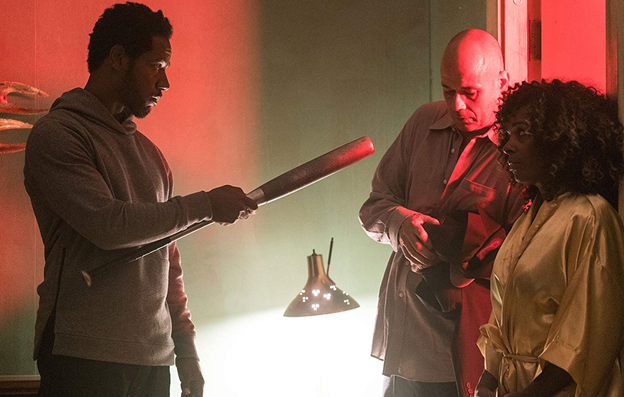 Over DRAGGED ACROSS CONCRETE’s elongated 159-minute runtime, we are introduced to three separate criminal parties, each raising the bar on what it means to be bad men. The first persona is Henry Johns (Tory Kittles), a recently discharged member of the correctional system and the hero of our story. Coming home to find his mother back on drugs and turning tricks to support his wheelchair-bound brother, Henry turns to former associate and childhood friend Biscuit (Michael Jai White) for one last job—one that promises a payout big enough to ensure his family will never have to degrade themselves again.

Next up is the detective duo of Brett Ridgeman (Gibson) and Anthony Lurasetti (Vaughn). We’re introduced to the pair as they brutally arrest a drug-dealing Hispanic couple. The incident is recorded on camera and distributed to the media, leading to Brett and Anthony’s suspension from the force. Following a tirade against the emasculation of society that could probably be published on Breitbart, the pair decide to make a “private bust” of an upcoming deal and use the seized assets to continue supporting their families. With these relatively selfless motivations, Zahler builds some common ground between Brett, Anthony, and Henry, but as their opening display demonstrates, our cops probably shouldn’t be trusted with either a badge or a gun. 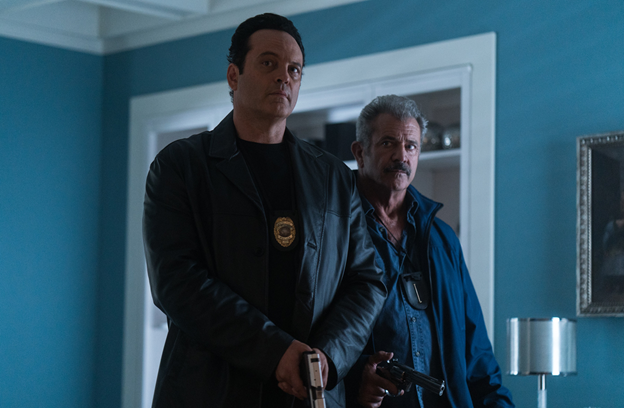 Vaughn as Anthony Lurasetti, being trusted with a badge and a gun

Though contemptible in their own way, the cops aren’t the real villains of this story. That dubious honor goes to the film’s final group of criminals, a trio of mysterious, nameless gunmen who positively radiate malice with every word and action. Perpetually clad in all black, each thug wears gloves, masks, and welding goggles that leave only their exposed lips as proof that they are men and not reptiles, though they’re certainly cold-blooded enough to lend that explanation weight. Throughout the film, we see the members of this crew step from the shadows to accost hapless bystanders, seemingly at random, demanding they empty out the contents of their pockets. Once they collect the chump change, these cutthroats ruthlessly gun down their victims, a horrific display of overkill that is usually accompanied by some kind of vile epithet.

In true Zahler fashion, these are without a doubt some of the most loathsome cutthroats in recent cinematic history. There is nothing pragmatic about the robbers’ executions—thanks to their disguises, no witness could possibly identify these men beyond “white”—demonstrating a clear inclination for sadism. The enigmatic nature of these killings makes their abrupt occurrences even more frightening, and when the motive behind them is finally revealed, it is so despicable in its pettiness that it revolts almost as much as the act itself. Every one of the crooks’ tresspasses is outrageous, and when their just punishment finally arrives, it is nothing short of exquisite.

Though they’re the most lacking in humanity, characterization, or explanation, I found this last group of outlaws to be the most fascinating. This is partly due to the obvious and overwhelming shock value they bring in every scene they’re in, and partly due to their evocative appearance. The retro, bug-eyed lenses of their goggles that literally turn them into unblinking killers also look strikingly like those worn by the Afrika Korps in World War II. Their matching black outfits bring to mind SS uniforms, and their heavy duty hardware is what you’d expect from a military force, not alleyway shooters. Their leader even speaks with a pronounced German accent. 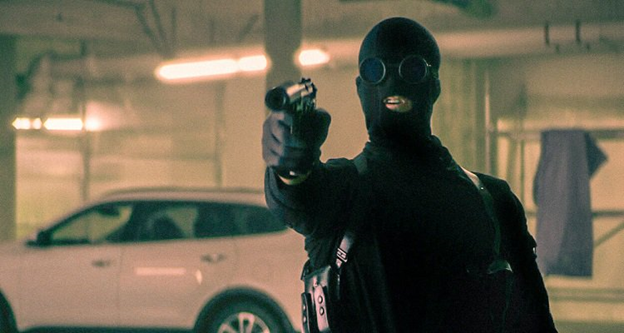 Can you spot the bad guy?

These guys are Nazis. They are the manifestation of every alt-righter’s wet dream, hateful commando wannabes who mow down innocents with machine gun fire and unironically claim afterwards that black guys have the worst-smelling guts. Peel off the masks and you’ll probably find some Swastika tattoos. As compelling of a theory as it is that Zahler is subliminally broadcasting right-wing propaganda through an exploitation movie with a black protagonist and a soul-inspired soundtrack that he wrote, I find it hard to believe he would go so far out of his way to demonize the very thing his supposed camp fetishizes above all else.

Brett and Anthony, in comparison, are casual racists, whose ignorance is guided more by convenience than true conviction. They use race as a vector to demean the drug-dealing couple at the beginning of the film because it is easy, though they would undoubtedly use any number of other angles had the identity of the criminals been different. They are bullies, bad guys who get off on leveraging their authority against those weaker than them, and they deserve more than a slap on the wrist for their brutality. Their commander (Don Johnson) says it best during their suspension, calling Brett a “human steamroller” with “no compassion.” 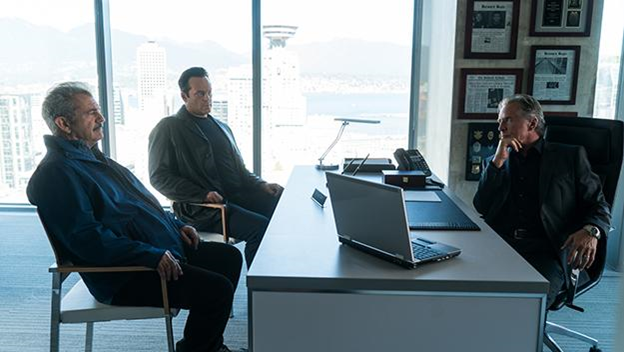 It’s difficult to discuss Zahler without also mentioning Quentin Tarantino, and for good reason. Both directors are incredibly talented white men with a penchant for punchy dialogue, extended shots, buckets of blood, and yes, having characters drop n-bombs. Tarantino has received a good amount of flak for his proclivity for writing slurs into his screenplays, but has yet to be canceled, seeing as nearly all of his films feature underrepresented or oppressed groups outfoxing their would-be tormentors.

DRAGGED ACROSS CONCRETE would appear to fail this critical criteria. Like all Zahler movies, this film stars stoic white men pitted against barbaric foes, the kind of guys who will absolutely never apologize for the not-so-woke optics of their actions. But where Tarantino offers power fantasies that justify the actions of his leads, Zahler’s films are more akin to cautionary tales, where the main characters are punished for the choices they make.

Case in point: Zahler’s debut, BONE TOMAHAWK, sees a posse of white settlers led by Kurt Russell take on a tribe of cannibalistic American Indians. It’s a logline with “Manifest Destiny” written all over it, but that fails to take into account a small scene early on where they’re warned by a local against going after the troglodytes. Full of arrogance and faith in their firearms, the cowboys decide to ignore the native expert and go after the tribe in their own way. It doesn’t go well for them. 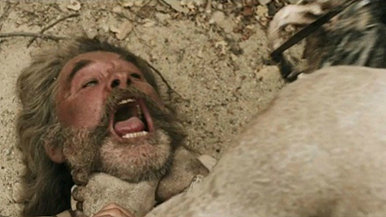 Likewise, Brett and Anthony do not have a pleasant time in DRAGGED, and things ultimately don’t go the way they’d want them to. Their confidence in their police (and in Anthony’s case, military) backgrounds lead them in way over their heads. Acting for the first time without any official authority behind them, the pair discover that their actions have dire consequences.

Our hero Henry, on the other hand, has no professional training, no body armor, and no high-powered rifle to take on his problems with. What he does have, and what Brett, Anthony, or the robbers never will, is a keen understanding and empathy for others. It’s his humanity, not his lethality, that leads him to arguably be the only character in the movie with a happy ending.

Yet for all their faults, it’s hard not to root for Brett and Anthony. It takes a gang of literal Nazis to make this happen, but god DAMN does it feel good watching these dirty cops try to take them down. When their prejudices finally backfire on them, it’s upsetting; “If only these guys weren’t so ignorant, they could have avoided that.”

In featuring a team of bigots in his movie, Zahler isn’t defending their behavior any more than Tarantino is promoting genocide by letting Christoph Waltz’s Colonel Landa steal the show in INGLORIOUS BASTERDS. Instead, by framing the story largely through the eyes of his most problematic characters, Zahler is able to give us the how and why of what is wrong with them. It focuses the message from something as universal and trite as “racism is bad” to a more pointed “don’t be a racist.” And frankly, it’s that kind of introspection that too many audiences in this country need to experience.