Jerry Lewis was never on my radar. I knew him from his stellar performance in Scorsese’s THE KING OF COMEDY, but beyond that he lived in my blind spot, my having deemed him as one of those guys people once thought was funny at the time. I was happy to be proved wrong. THE BELLBOY, turning 60 this week, has revealed itself to be pioneering in its carefully orchestrated yet approachable comedy. Parody hallmarks like AIRPLANE! and the SCARY MOVIE franchise owe their existence to Lewis’ film. I don’t mean simply that he commands the screen, but he’s actually behind it in both directorial and screenwriting capacities. In that sense, THE BELLBOY is unparalleled in its auterist comic grip. Lewis holds a vibrator to your funny bone—if it sometimes strays into un-erogenous areas, he rapidly navigates it back to your comedic G-spot.

The “Head of Paramount” introduces the film, highlighting its novelty as a plotless entity. He warns us that it is simply a series of funny scenes, and at no point does the movie subvert that promise. Despite our having been conditioned by ADD sketch shows like SNL, THE ERIC ANDRE SHOW, or TIM & ERIC, THE BELLBOY is still unique in its commitment to saying absolutely nothing. Of course, saying nothing is in fact saying something. Here’s all you need to know: Jerry Lewis is Stanley the Bellboy at a hotel in Miami Beach, Florida. Sit back and enjoy as his incompetence lands him into wacky stews of trouble—with girls, guests, and the manager. 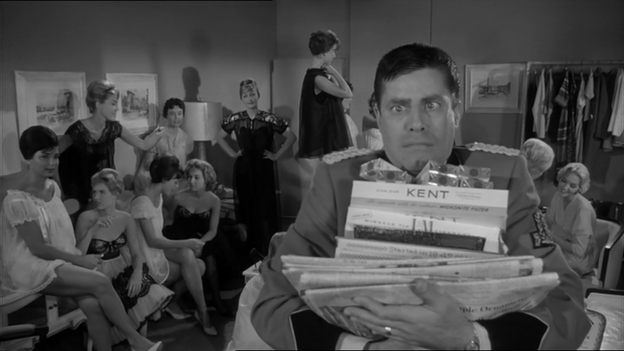 What you won’t find here is laziness—Lewis is a passionate director. One funny and evocative scene has a group of guests trying unsuccessfully to jangle their doors open with their keys. Lewis (who is not in the scene) shoots on a long lens down a curved hallway, an arc of modish guests populating fore, mid, and background. The inexplicable barrier of entry anticipates, and inverts, Luis Bunuel’s THE EXTERMINATING ANGEL, wherein a group of bourgeois are inexplicably unable to exit the living room after a party. It’s such a four-square frame that you wonder what Lewis is trying to suggest—there is an unbreakable alienation between members of the hegemonic class—but it doesn’t make sense to wonder too long. Lewis is after comedy, and comedy is what he delivers.

Lewis is an agreeable performer and yet his somewhat concerning amount of spasticity doesn’t make for the most enticing comedy clown. Charlie Chaplin and Buster Keaton both managed to exaggerate without making their characters seem slow. Stanley’s behavior isn’t driven so much by naivete but rather by sheer stupidity, which makes for easier (and less satisfying) jokes than the two famous silent movie stars. I mention that because THE BELLBOY is very much in the vein of those two giants. Stanley is an almost entirely silent character—for the most part, the dialogue is used only to set up the jokes, which could be told with title cards if they weren’t so disruptive, featuring the expressive Lewis trying to work through the unfortunate predicament very literally.

Nevertheless, few movies of the era, comedy or otherwise, exude as much playfulness as THE BELLBOY. Lewis breaks protocol several times, undermining the fourth wall, putting his hand over the camera, and appearing in the film as himself such that Stanley and the Jerry Lewis character are involved in the same scene. The disruptions are vivid and startling—Lewis’ directorial debut offered a blueprint for film reflexivity, which later generations would develop towards something bracing. To contrast THE BELLBOY to its contemporaries is to recognize the caution apparent in most of the latter and the no-holds-barred approach of the former. 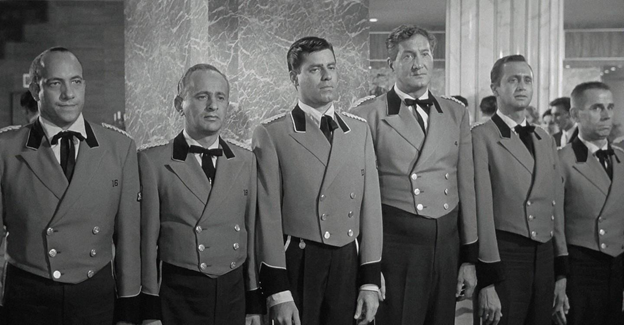 Despite, or because of, Stanley’s extradiegetic interruptions, the film flys by at only 71-minutes. Hallelujah! Not that it’s a trying experience—it’s simply that Lewis realized that a premise can only be taken so far. THE BELLBOY gets in and gets out, leaving you feeling, frankly, a bit disoriented. It’s a matter of rolling with Jerry Lewis’ punches: the jokes come a mile-a-minute and you either—on a kind of initial gut instinct—speed up to laugh alongside them or sit it out and wait for the next one to show up. Go ahead, check in. It’s only 71-minutes—what have you got to lose? (Besides your keys).