Pettily released on Paramount+’s launch day, Amazon’s recently acquired COMING 2 AMERICA is 10 minutes shorter than the original, but still 20 minutes too long for the material. Originally meant for an August 2020 theatrical release, it’s fascinating to watch a remnant of Paramount’s foolhardily arrogant, immediate past, the studio pumping wheelbarrows of cash they did not have into a studio comedy once again; the psychos crafted better digital de-aging technology than that used in any recent Star Wars film for a prolonged date-rape joke.

It’s a rich sequel, shot on Tyler Perry’s expansive Atlanta studio lot with a seemingly unlimited costume budget, but also a stark confirmation of the ending of 1988’s COMING TO AMERICA: as Akeem and Lisa ride away from their royal wedding, they claim to never want to give up any of this wealth now that they’re constantly surrounded by it. As it turns out, they seriously kept to their word, them and the film fully carrying through with the whole “no one learned anything” of it all to relish in a Black capitalist wet dream. Mainstream media representation will continue boiling down to “What if we were the billionaires?” for the foreseeable future… Get comfy.

Let one unequivocal truth be known: Eddie Murphy is a GOAT. That’s that on that, despite his despicable stand-up (he’s since apologized numerous times for his braindead takes on LGBTQ+ peoples; whether you buy those apologies is entirely up to you) and despite the fact that the dude has four, six if you’re generous, decent films in a 40-year career—all the same, he’s been held to scrupulous inspection by peers of all creeds. Murphy, like all Black superstars, fell victim to decades of a white critical and financial elite resenting his success to the degree that he burdened his professional decisions with the value of their perception, but it sure is odd that 30 years after Spike Lee put Eddie on trial for not using his clout to elevate more Black creatives in the studio system, he doubles down on Craig Brewer as his go-to director. Don’t get me wrong, DOLEMITE IS MY NAME was a delight (Brewer unfortunately is still devoted to his preferred YouTube Originals-style digital camerawork) and HUSTLE & FLOW winning Triple Six the Oscar is one of the best moments in broadcast history, but his compliance as an underling to Murphy leads to KINGDOM OF THE CRYSTAL SKULL syndrome, with Jermaine Fowler getting Shia’d into false stardom, Eddie quite literally leading with his hanging gut, and shameless product placement abounding, with a Pepsi name-drop so egregious that it’s complete with enough dead air for the logo to fade into. 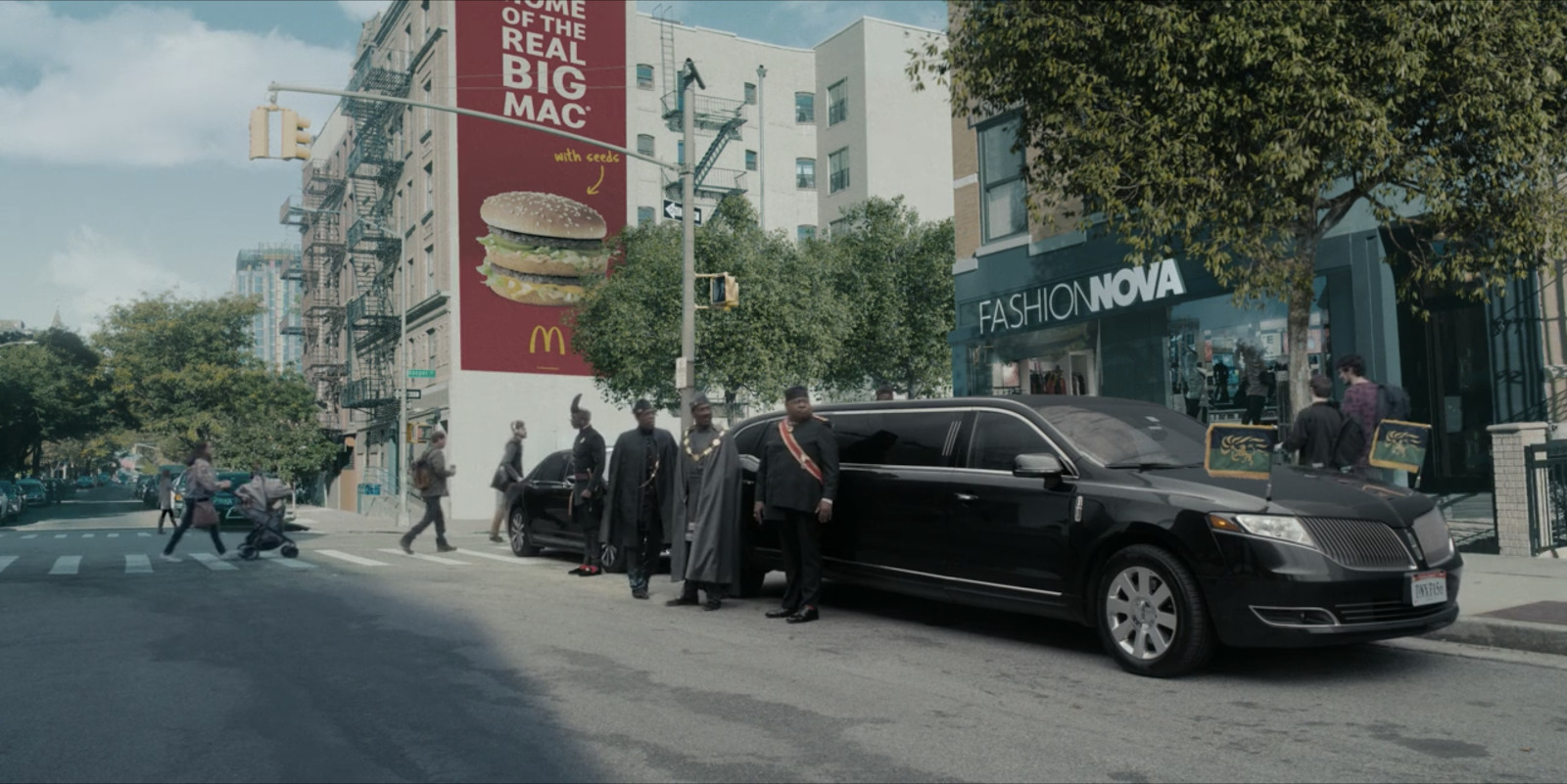 COMING TO AMERICA, as consummate a classic it may be, is marred by the infamy of John Landis’ caustic feuding with Murphy, denying the star who brought him onto the project the shine his fans joyously placed on him. Now nearing 60 and a late-stage comeback, Murphy doesn’t have the stamina to sic his crew to beat a child murderer’s ass nor have his ego questioned in his elder statehood. Hold on, rewind, you’ve heard about John Landis and Eddie Murphy’s on-set feud, right? Oh, buddy, let me help you out, here’s a primo excerpt from a 1990 Playboy interview with Murphy:

MURPHY: I’m sitting there shattered; I’m thinking, “This fucking guy. I bent over fucking backward to get this guy a job. He probably won’t even acknowledge what happened. He didn’t realize that his fucking career was washed up.” So I told him, “The next time you fuck around with me, I’m gonna whip your ass.” His Hollywood shit came out then: “What do you mean, ‘whip my ass’? That’s not in our deal.” So I said, “You’re gonna have to give me either some fear or some respect. I want one of them, because this is my shit and you’re working here. If the only way you can fear me is knowing that the next time you fuck up, you’re gonna get your ass whipped, fine.” But Landis was fucked up: “Is that a net or a true-gross ass whipping I’m gonna get? What kind of ass whipping is it?”

PLAYBOY: Would you have whipped his ass?

MURPHY: If he had fucked up again, I would have beat the shit out of him.

PLAYBOY: Even considering the consequences of a lawsuit and criminal charges?

MURPHY: The thing about an assault charge is that if you’re gonna do it, make it worth it. If it had come to that—whipping his ass—there wouldn’t have been some headline like “EDDIE MURPHY PUNCHES JOHN LANDIS IN THE FACE.” I’d have beat the shit out of him, put him in the fucking hospital, almost killed him. Then, when the headline read “EDDIE BEING SUED FOR ASSAULT,” I’d have said [humbly], “Yeah, I did give him a horrible ass whipping; he deserves some sort of compensation, because I did beat the shit out of him.”

Anyway, it worked. He was afraid of me. He’ll probably never admit it, but the motherfucker was on his fucking toes for the rest of the show and didn’t fuck with me for the whole rest of the picture. 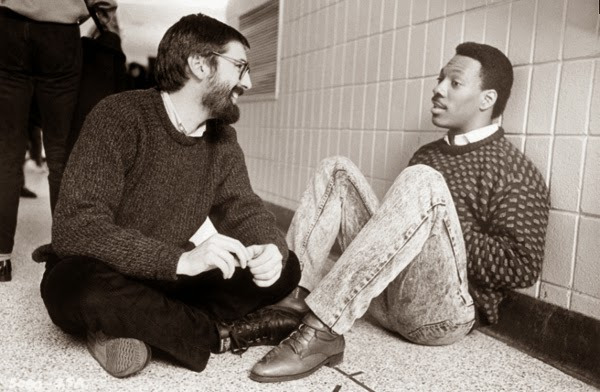 We love a toxic legend. I’m in the bag for anything Eddie Murphy, I’ll even give MR. CHURCH the dignity of acknowledging that it exists, but in making a reversal of COMING TO AMERICA, Brewer made the funniest comedian of the ’80s the stoic straight man while simultaneously subverting the original plot so that it reverts back to the boiler plate ALADDIN story it was spoofing: in short, COMING 2 AMERICA finds a way to scientifically eliminate all and every trace of comedy. There are so few jokes, such little newly injected life, the film simply begging you to crack up at its pleasantries and no more, recycling the Queens and Zamunda culture clash and replacing potential long-form gags with action sequences (the entire lion-trapping set-piece is a profound waste of your time and digital artists’ resources).

Studios are convinced that the entire appeal of these nostalgic throwbacks is showing the audience how little has changed, thinking it conjures comfort when all I’m feeling is a stagnant depression. Akeem gets a firm talking to about his adherence to centuries of tradition, casting aside his daughters for royal positions they are better suited for than the Madison Square Garden-grifting bastard son he flew in to the palace, but it takes 80 joke-less minutes for us to get to this source of conflict, the first in the film. Wasn’t the last one also about this retrograde understanding of equality? One of two scenes in the iconic barber shop is meant to highlight how newly woke the 2010s are, but the sentiment in practice boils down to having the royal bathers wear flesh-tone bikinis instead of baring breasts or, in one of many callbacks to the original, having a male bather say “the royal privates” to avoid a potential Twitter outcry over having said “the royal pussy.” Nearly worse, COMING 2 AMERICA runs its mouth and makes two of its characters force a conversation about sequels to movies that no one ever asked for. It reminds you of how what you’re watching, in its base DNA, is simply not working, calling out the dismal cultural climate while contributing a straight injection of cancer to it. Irredeemable. However, Teyana Taylor twerking is now preserved on film for our remaining decades alive, so a point goes to film preservation. 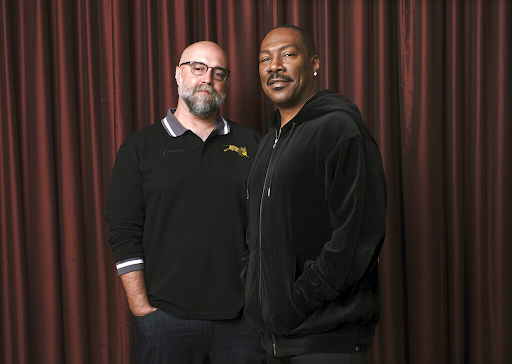 It’s a comedy that ends with a dance-off to Sister Sledge’s “We Are Family” and a verse from the original film’s rapping twins, less a loving remembrance and more a 32-year-late stimulus check in what would feel at home in a movie for children, maybe not a sequel to one of the best raunchy comedies of the ’80s. In the end credits blooper reel, Morgan Freeman saying “fuck” gets bleeped. And yet, you’re still inclined to treat a project made by such affable personalities with kindness. It’s like visiting a problematic family member after you’ve both gotten COVID vaccinated—you want to enjoy this moment, so you’re telling yourself you’re enjoying this reunion, but repeating meaningless lies to yourself only ends up tiring the soul. Whatever, man, I’m just glad Kiki Layne is getting more high-profile work.

Interview: Thank You Thank You