M. Night Shyamalan has had somewhat of a troubled career. He positioned himself as one of Hollywood’s best thriller directors, pumping out quality, engaging pictures such as THE SIXTH SENSE and UNBREAKABLE, and audiences were eager to support the Indian-American director in any way they could. Then, something happened. THE LADY IN THE WATER was critically maligned and a box-office bomb, as was THE LAST AIRBENDER, and Shyamalan found himself at an increasing distance from moviegoers. He was essentially booted from Hollywood—in an admirable move, Shyamalan self-financed his comeback feature, THE VISIT, used the profits from that film to make SPLIT, and managed to accrue a $20 million budget for GLASS. Shyamalan’s is a story of independent spirit, untethered to traditional methods of filmmaking, and a genuinely inspiring tale for prospective Indian-American directors. With GLASS, Shyamalan has crafted another mammoth success story—financially, at least (the film has grossed over $160 million worldwide). Even if the picture never truly comes together to form a cohesive whole, one can hardly fault Shyamalan for his sheer dedication to the craft of film directing and his singular formalist approach.

GLASS serves as a sequel to both UNBREAKABLE and SPLIT, and while knowledge of those films isn’t a prerequisite, it certainly helps to have been introduced to the characters beforehand. Bruce Willis plays David Dunn, an everyman Superman; Sam Jackson is Mr. Glass, a formidable adversary with a stunning intellect; James McAvoy plays Kevin Crumb (among others) as an individual with a fantastical version of Dissociative Identity Disorder, with one of his alters being a menacing, gargantuan humanoid known simply as “The Beast.” Also of note is Sarah Paulson as an enigmatic psychiatrist, once again proving her worth as one of the most talented actors of her generation. The film is primarily a chamber piece, taking place in a psychiatric hospital, as Paulson attempts to convince these supernatural humans that perhaps they aren’t so supernatural after all.

Many have criticized latter-day Willis for his apparent non-acting, though I think the man is still capable of giving a raw performance (check out last year’s highly underrated DEATH WISH). He’s more than serviceable here, tapping into Dunn’s self-doubt and imbuing him with a real sense of loss and urgency. Sam Jackson does some incredible facial acting, displaying tics and twitches that seem almost too uninhibited for the actor’s own good. McAvoy is the weak link here, losing sight of any of the subtlety he exhibited in SPLIT, often relying on his alters’ physical behavior instead of trying to approach them from a place of emotional resonance. Paulson nails the psychiatrist role, evincing both empathy and a cold, calculated mentality—she’s a wonderful creation.

Shyamalan’s formalism is the film’s strong point—he’s one of the few American directors today who understands shot economy is not only an efficient and cost-saving way to tell the story, but also that a fluid master generates more suspense than cut-heavy and balkanized coverage. He’s always finding new and exciting ways to propel the plot, and demonstrates a comprehensive grasp of how to cover the scene—never does a shot feel as if it could be removed and inserted with a different one. Everything here is boiled down to its absolute essentials and I’m more than happy to commend Shyamalan’s direction. 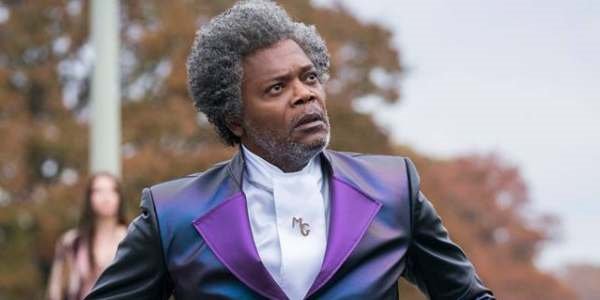 The screenplay has some novel insights about trauma—how survivors surround themselves with other survivors, and how that leads to an exacerbation of the trauma state by continually reminding the survivors the situation from which they barely escaped with their life. The three superheroes find solace in one another, even though they may be on different sides of the moral spectrum—it is about the challenge of being extraordinary, the deeply-held conviction that one’s trauma not only makes one stronger, but allows for a sort of deification, wherein the trauma becomes the survivor’s defining characteristic. Shyamalan is aware of how dangerous this suggestion is, and treads carefully accordingly.

Shyamalan’s weakness has always been his inability to distinguish between necessary plot twists and twists that halt forward momentum and introspection in favor of sensationalism, not trusting his audience to simply sit in a straightforward situation. Shyamalan seems to despise linearism, always jonesing for some jolt of adrenaline to advance the story when the story itself is content to simply observe its characters in various states of disarray. The helmer teases a grand, ostentatious finale, and, thankfully reigns himself in, exercising some sort of semblance of control over his story. I’m grateful that Shyamalan received a second chance—denounce the man’s childlike giddiness or lack of self-awareness, but also be grateful that such a talented and gifted director has been able to grace us with an interesting picture, a picture more substantive and skilled than the cavalcade of superhero films Hollywood is so intent upon ejaculating unto viewers.