Four years ago this Sunday, the publication formerly known as Crossfader was born on a laptop at a Starbucks in Burbank. On our third birthday, we announced we would be taking a break from publishing to focus on a redesign and rebrand. On November 7th, 2018 we were happy to bring Merry-Go-Round Magazine into the world, and were honored to have our operating costs covered by our readers and supporters via Patreon in May of this year.

That said, the journey is certainly not over for us, and our next big goal is to be able to begin compensating the contributor base that’s worked so hard to make Merry-Go-Round what it is. To celebrate our birthday in the hopes of reaching our next goal, we’re hosting a Patreon Drive with exclusive reward tiers for a limited time.

If you become a new or upgrading Patron of Merry-Go-Round Magazine before September 1st, in addition to the standard reward tiers (sticker, pin, shirt), you’ll receive the following exclusive rewards:

$2 – An exclusive Merry-Go-Round Magazine and Trailer Trashed sticker pack with the designs shown below.

These rewards are EXCLUSIVELY available to new and upgrading subscribers from now until September 1st! Visit our Patreon here!

We’re excited to offer these exclusive pieces of merch and hope you’ll join us in celebrating our fourth birthday!

STICKER PACK – JOIN AT THE $2 LEVEL AND GET ALL FOUR EXCLUSIVE STICKER DESIGNS! 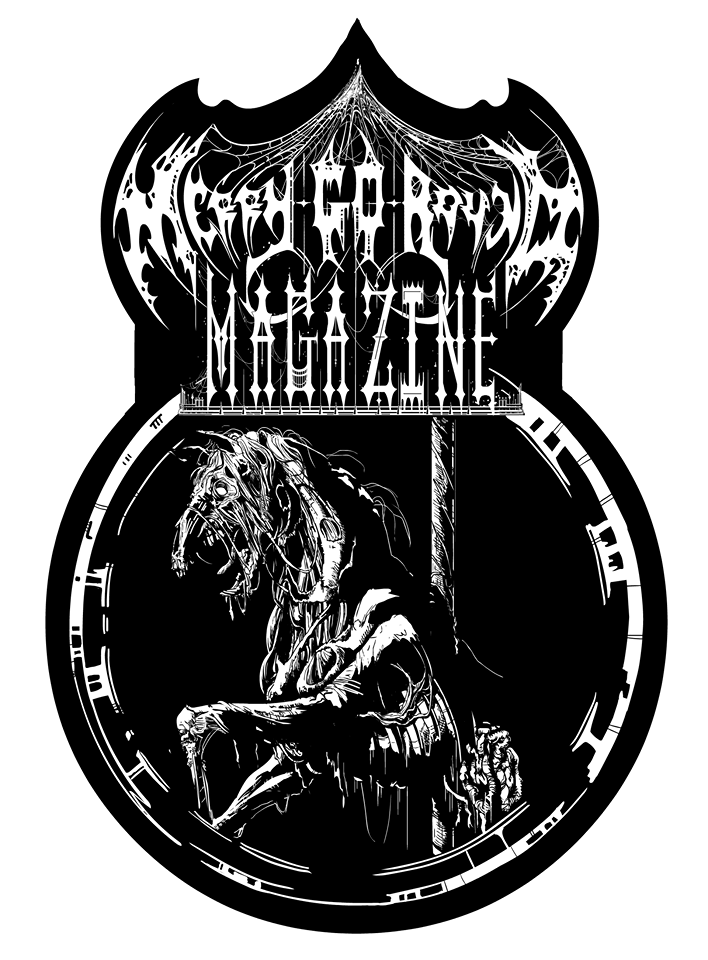 Your love for Merry-Go-Round isn’t a phase, MOM. Hail Satan!

Design by Sean Glaze AKA LordSpew

Sean is an LA-based animator, board artist, and designer. He’s lent his artistic talents to animated series such as TIGTONE, REGULAR SHOW, and STONE QUACKERS; he functions as a one-man animation studio cranking out animated comedy shorts; and he recently illustrated a story for Hustler Magazine. This skill-set versatility has led to a longtime relationships with Adult Swim and Titmouse, where he has created multiple network “bumpers” featuring characters from RICK AND MORTY, HOTSTREETS, and HARVEY BIRDMAN, ATTORNEY AT LAW. He also contributed to TOONAMI’s 20th Anniversary “Exquisite Corpse” short. You can view more of his work at his website, follow him on Instagram (@lordspew), and check out his live drawing streams on Twitch (twitch.tv/lordofspew). 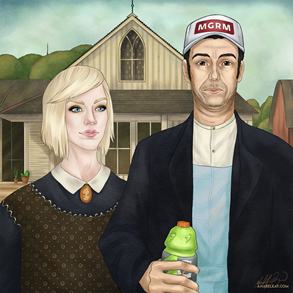 It’s Carly Rae Jepsen and Adam Sandler as American Gothic except instead of a pitchfork Sandler is holding a Limon Pepino Gatorade. Any questions?

Anabel Kay Boyanova currently resides in Orange County, CA and is originally from the beautiful Balkan country of Bulgaria. She studied at Chapman University and worked as a development assistant and executive in the Film/TV Indsutry before leaving to pursue her life-long dream of drawing professionally. You can view her work at her website and follow her on Instagram (@anabel.kay) and Twitter (@anabel_kay). 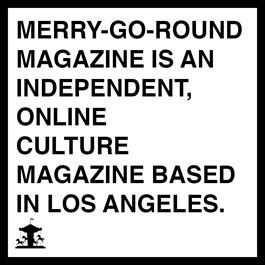 A nod to the minimalist aesthetic of Ye Olde Crossfader site. If we can’t milk our own pretentiousness for content, what has this all been for?

Design by our very own Music Editor and photoshop guru, CJ Simonson 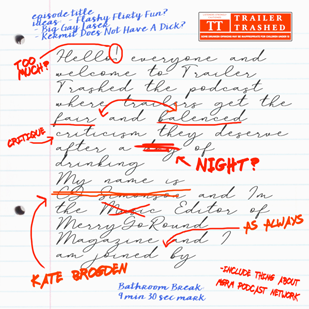 The glitter and glue of our burgeoning podcast network, TRAILER TRASHED finds TV Editor Kate Brogden and Music Editor CJ Simonson getting deep in the cups and talking about the latest in film, TV and video game trailers. Despite having written the intro spiel themselves, they never seem to get it quite right. It could be all the shots. In fact, yeah, it’s probably the shots.

TOTE BAG – $5 TIER GETS YOU ALL FOUR STICKERS PLUS THIS EXCLUSIVE TOTE! 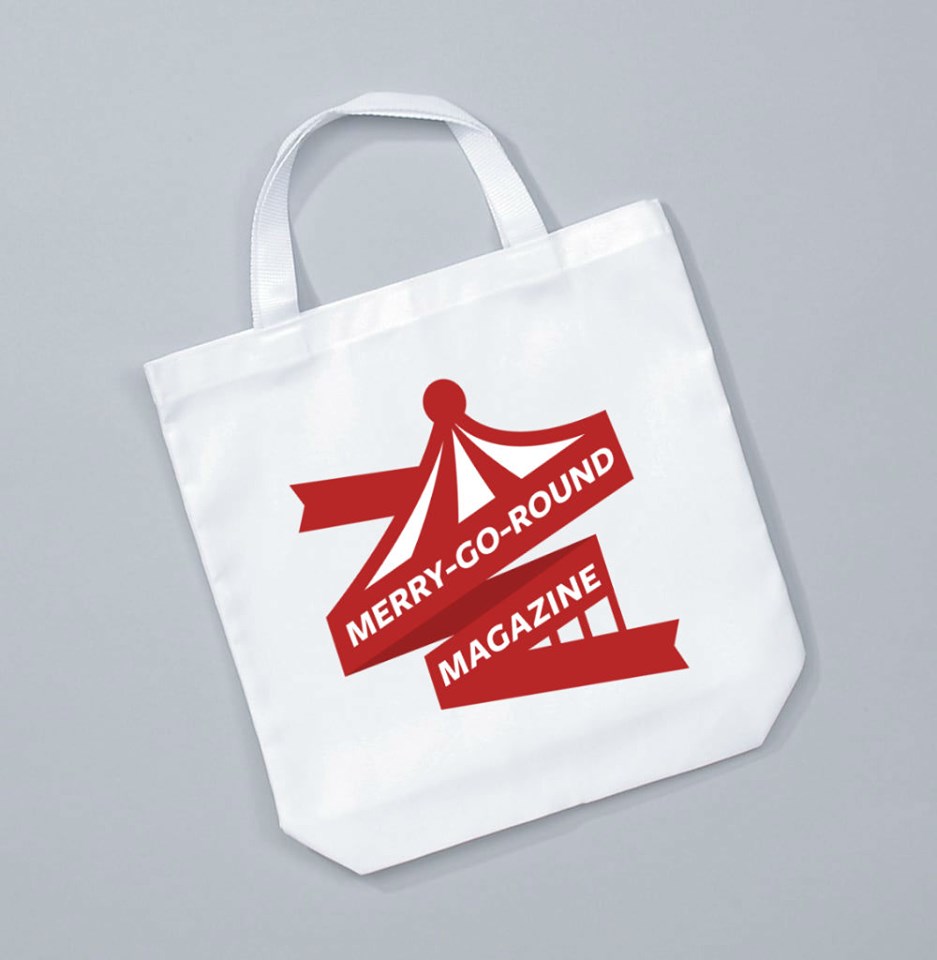 Don’t throw those plastic bags in the ocean, ya dingus! Now everyone will know you’re an environmentally-conscious connoisseur of independent media criticism with your very own Merry-Go-Round Magazine Logo Tote Bag!

Image is proof of concept – actual tote will be screenprinted red carousel logo on white bag but may not be exactly like the picture.

MERRY-GO-ROUND GUIDE TO LA ZINE – $10 TIER GETS YOU THE ZINE! PLUS THE TOTE! PLUS FOUR STICKERS!!

From family-friendly outings to niche community offerings and artistic odes to the City of Angels, Merry-Go-Round Magazine is proud to present the definitive guide to Los Angeles curated by our editors and staff. This will be a physical, bound work you can hold in your hands, which is a very exciting first for our little operation! You won’t want to miss it!

Visit our Patreon here! Thank you for your support!

Sellout Chance The Rapper Has a Terrible, Horrible, No Good, Very BIG Day

Wrestling With the Past and Future, Tyler Childers Explores Primal Truths on COUNTRY SQUIRE 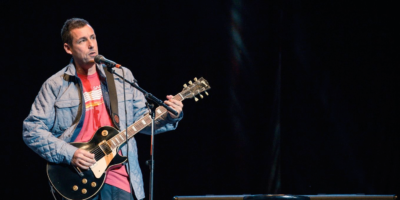 Letter from the Editor: The Genius Issue 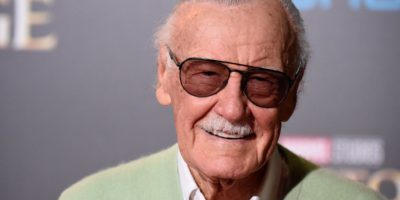 Year Two: State of the Union